HISTORY OF THE WASHINGTON KASTLES 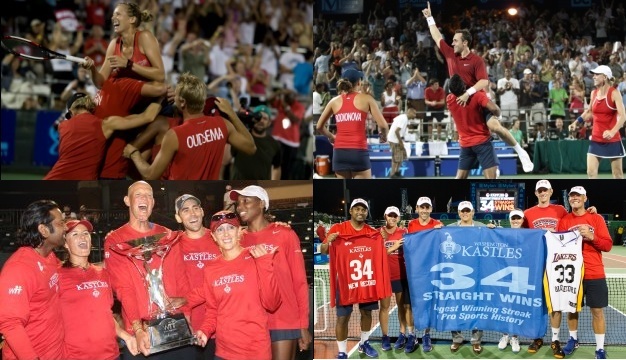 With an intimate stadium, music between points, cheerleaders, and mascots both tall and round, the Washington Kastles offer a high-energy experience unlike any tennis tournament in the world. Since the team’s founding in 2008, the Kastles have quickly rewritten the record books of World TeamTennis.

The incomparable Serena Williams represented the Kastles in their Downtown D.C. debut on July 8, 2008, and the Kastles have taken the Washington sports scene by storm ever since.

Playing with home court advantage in the 2009 WTT Finals, the Kastles saved three championship points to capture the King Trophy. They topped that in 2011 by winning all 16 of their matches, including the WTT Finals, to become the first team in the 40-year history of the league to complete a perfect season.

History repeated itself in 2012 when Washington enjoyed an unprecedented second straight undefeated season and won its third WTT title. The Kastles followed with a fourth title in 2013, setting a major U.S. pro sports record along the way by extending their winning streak to 34 matches. The dominance continued in 2014 and 2015 as the Kastles won their fifth consecutive title, breaking a tie with the Sacramento Capitals for most consecutive titles won.

And in 2019, the six-time WTT champions built the world’s first rooftop stadium in pro sports history!

Past or present Kastles players have combined to capture 137 Grand Slam singles, doubles and mixed doubles titles as well as 18 Olympic medals. Among the stars to suit up in Kastles red and blue are former World No. 1s Venus Williams, Leander Paes, Rennae Stubbs and Martina Hingis, who all played major roles in Washington’s six championship runs.

In unforgettable fashion, Venus rallied the Kastles from six games down and saved four match points against the New York Sportimes on July 21, 2012. Paes was named the league’s Male MVP in 2009 and 2011, while Stubbs solidified the Kastles’ doubles lineup during the same seasons. Hingis joined the team in 2013, leading Washington to a 22-2 two-year record in matches that she played (4-4 in matches that she didn’t).

But besides the big names, the Kastles have had their share of unlikely heroes who’ve provided D.C. fans with some of the most memorable moments in team history.

* Nadia Petrova joined Washington for its final two matches of the 2009 regular season, helping the Kastles clinch the playoff spot that resulted in their first world championship.

* Scott Oudsema emerged as the 2009 WTT Finals MVP and Olga Puchkova saved three championship points in women’s singles to lead the Kastles to the title.

* Treat Huey, Edina Gallovits-Hall and Raquel Kops-Jones led Washington to four wins in 2012 while Venus, Paes and Anastasia Rodionova prepared for the Olympics.

* Bobby Reynolds played in 78 consecutive Kastles matches and swept all three league awards: WTT Male Rookie of the Year in 2010, WTT Male MVP in 2012 and WTT Finals MVP in 2013.

To keep those memories alive, WashingtonKastles.com now features an entire section dedicated to the statistics, complete with results, and photos from the first eight years of Kastles tennis.

Enjoy your trip down memory lane and see you back at Kastles Stadium in 2019!