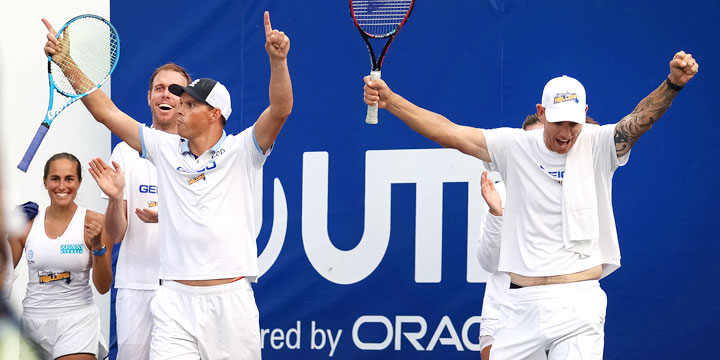 The Washington Kastles went into Wednesday’s match with the Vegas Rollers playing to stay alive for a World TeamTennis playoff berth.

Vegas, having lost five straight and already eliminated from the postseason, was simply playing for pride in its final match of the season.

“Even though we were out of it, we still fought our butts off,” Muhammad said. “Never for a second did we throw in the towel and I’m really proud of everyone for that. Tonight we were like, ‘we have nothing to lose, they have a lot to lose’ and misery kind of loves company so we were out to compete.”

#WTT2020: @BryanBrothers and @BryanBros have had legendary careers, but are they done yet? WTT's @NickGismondi spoke with the tennis icons after they lead the @VegasRollersWTT to a big win in their last match of the season. #EveryBryanCounts pic.twitter.com/T7LMeCrqDi

Compete they did, as the injury-ravaged Rollers won three of the five sets with their original roster penciled in for the match. Vegas had been missing Muhammad for much of the season due to a shoulder injury. But when mid-season replacement Ajla Tomljanović went on injury reserve, Muhammad was able to return to the lineup and came up big to help Vegas end its season on a winning note.

“It was great to have Asia get back in and actually win it for us because I felt really bad for her,” Rollers coach Tim Blenkiron said. “She got injured and then we gave her a couple of days to rest to try again. It was clear that the arm wasn’t gonna be ready and then we brought Ajla in. It was a tricky season, but the team morale was incredible.”

Bernarda Pera opened the match impressively for Washington, as she improved to 36-29 in women’s singles with a 5-2 domination of Puig. The ladies held serve after the first two games before Pera reeled off three straight wins en route to the set win.

Things appeared to be headed to another set-tiebreak between Sam Querrey and Tommy Paul in men’s singles, like the first time they met. But with Querrey finding his rhythm and taking a 4-3 lead, Paul fell apart and lost his final serve at love, including a double-fault on his last attempt.

In a surprising twist just after a ceremonial point in men’s doubles, Blenkiron replaced Bob Bryan with Querrey, who joined Mike Bryan for the set. It wasn’t until after the match it was revealed Bob Bryan had strained his quad. As it turned out, the momentum from his men’s singles victory carried over, as Querrey brought plenty of energy and helped the Rollers take the set, 5-2, over Nick Monroe and Marcelo Arevalo.

It was the first time since July 21 the Rollers had won back-to-back sets, while they also took a 12-10 lead at the half.

Williams and Pera proved to be too much for Puig and Muhammad, as the Kastles tandem opened a 4-0 lead in the set and breezed to a 5-2 set-victory to give Washington a 15-14 overall lead heading into the final set.

“I needed that (women’s) doubles (set), I’m glad we scraped out a couple of games in the doubles, just to help the team going into the last match,” Muhammad said. “I just needed that to get loose and to see the ball again. To just be able to play today, and just be healthy, was just really, really nice.”

Pera’s 55.3 winning percentage in women’s singles has her sitting fourth overall in the league, an impressive mark for the 25-year-old in her WTT debut.

With the loss, the Kastles are eliminated from playoff contention. The New York Empire, who lost in last year’s championship match in Las Vegas, earned the No. 4 seed in the postseason.

The Washington Kastles play their final regal season match on Thursday when they take on the playoff-bound Orlando Storm at 4 pm ET/1 PM ET on Tennis Channel. The Vegas Rollers have completed their season.