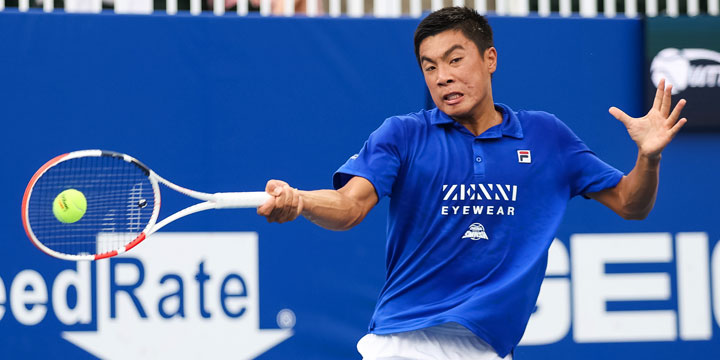 On Match Day 13, Chicago’s Brandon Nakashima had a coming-out party at Center Court at Creekside at The Greenbrier as the Smash dropped Washington, 21-15.

Chicago wrapped up the win after falling behind 0-30 in the fifth set before Nakashima capped the rally with back-to-back aces for the 5-0 decision.

#WTT2020: @GuaranteedRate Player of the Match Brandon Nakashima chatted with @NickGismondi after going 10-1 to help @ChicagoSmashWTT to a 21-15 win over the @WashKastles. He talked about coming out of the gates strong, his partnership with @RajeevRam and more! pic.twitter.com/aGULRAnZtB

“[Ram] has been leading the whole team,” Nakashima said. “All of us are doing really well, having a lot of fun out there. It’s really nice to play doubles with him and get a feel for his personality and how he is on the court.”

Nakashima, the ATP’s 220th-ranked player, remained on the court to face the Kastle’s Tommy Paul in the men’s singles match. BNak pushed the Smash advantage to 7-0 before Paul, ranked 57th by the ATP, broke through for Washington’s first point.

Nakashima, the Guaranteed Rate Player of the Match, shook off the setback and ran the table to complete the 5-1 win. In the final set, he fell behind 0-15, served an ace and followed by dropping in a backhand volley for a 30-15 advantage. On the last point, Paul returned Nakashima’s serve into the net as the Smash took a 10-1 lead.

“It’s great to come out with a good start, for myself and the team, and to play well in the doubles and singles,” the first-year WTT player said. “It was really good for my confidence and definitely helped the team out in the end.”

Washington (4-5) looked to narrow the gap in mixed doubles. The Chicago tandem of Ram and Bethanie Mattek-Sands took the first set, but the Kastles’ Arevalo and Bernarda Pera won three consecutive points to pull within 11-4.

But the Ram-BMS duo squelched any ideas of a Washington comeback. The Smash won three of the final four games – including a 5-0 run during the 9-point tiebreaker – for the 5-4 win and a 15-5 advantage.

The women’s singles pairing was a rematch of the 2017 U.S. Open semifinal. Sloane Stephens was on the cusp of putting away 40-year-old Venus Williams, but a double fault during the 9-point tiebreaker left the door open.

After a seesaw match that saw the two former Open champions split the first four games. Stephens won two of the next three before Williams, excelling in her 15th WTT season, took a 4-3 lead in the tiebreaker. She capitalized on set point to give Washington its first match win to pull within 19-10.

Chicago looked to close out the match with its women’s double team of BMS and Genie Bouchard against Williams and Arina Rodionova. Buoyed by her singles victory, Williams spurred the Kastles duo to a 4-0 lead to pull within 19-14.

Chicago avoided being blanked by winning the fifth game before Washington pulled within 20-15 to force extra play. Ultimately, the Smash tandem took the opening match to seal the 21-15 victory.

After keeping pace with WTT front-runner Philadelphia, which holds a one-match lead, Chicago will face third-place New York on Saturday. Nakashima said the next match would be a lot like the previous nine.

“We’ve just been trying to do the same thing we have been all season – taking care of business, taking care of our bodies,” he said. “Playing well on the court is really big for us. Moving forward, just stay consistent out there, show up every day. Playing well will help us get through all these matches.”

The men’s doubles match, won 5-0 by Ram-Nakashima, took only 15 minutes. Nakashima’s 5-1 singles match lasted 21 minutes. Without commercials, a half-hour sitcom is 22 minutes. Obviously, these Friends were Almost Perfect. (Get it?)

Chicago is two matches ahead of New York. The Smash topped the Empire, 22-21, on July 17. The victory decided in a super tiebreaker won by Nakashima against Jack Sock, and three matches – mixed doubles, men’s doubles, and men’s singles – featured a 9-point tiebreaker. The rematch is at 7 p.m. ET Saturday on ESPN+.

Duane Cross is in his first season covering the WTT and Chicago Smash, and his 31st as a sportswriter.