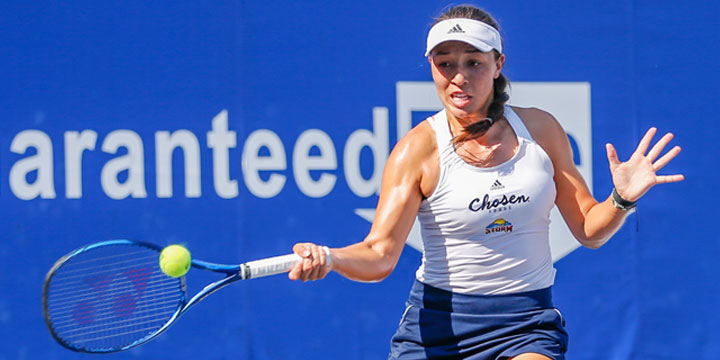 The Orlando Storm are going to be asking for a lot out of Jessica Pegula for the rest of the season. If Tuesday’s match is any indication, she is up to the task.

Pegula won two of her three sets Tuesday and directly contributed to 14 victorious games as Orlando stormed the Washington Kastles, 23-17.

Her heavier workload came as a result of Danielle Collins’ dismissal from the league, which was announced Monday night by World TeamTennis CEO Carlos Silva. Silva said in a statement that Collins was dismissed “after breaking our COVID-19 protocols and leaving The Greenbrier Resort and the state of West Virginia.”

After losing in women’s singles, Pegula guided the Storm (4-4) to victories in the next two sets. She and Ken Skupski defeated Arina Rodionova and Marcelo Arevalo, 5-3, in mixed doubles. That was followed by a convincing 5-1 triumph in women’s doubles alongside Darija Jurak over Rodionova and Bernarda Pera.

“Kenny and I have been playing well together. We just stepped it up a little bit there at the end,” Pegula said. “It’s literally one or two points every single day that’s swaying these matches. I thought we really fired up. We focused and we played really well. I was able to carry it over to the (women’s) doubles, and Darija played great.”

#WTT2020: @GuaranteedRate Player of the Match @JLPegula sits down with @OliviaDekker to break down the importance of the doubles after a pair of tight singles sets in the @OrlandoStormWTT's 23-17 win over the @WashKastles. #ORLvsWAS #EveryPointCounts pic.twitter.com/oHdXUtrNqU

Despite that loss in singles action, it was really a moment in that set which changed the entire tenor of the match. It took place during Pegula’s nine-point tiebreak with Pera. Up until then, there had been 17 games in the match — all of the men’s singles set plus the first eight games of women’s singles — without a break of serve. Everything was unfolding without much drama or emotion between two teams playing just a couple of hours after sunrise.

Then Hawk-Eye screwed up. With Pera serving up 2-1 in the tiebreak, the sport’s line-calling camera system ruled that her forehand along the sideline was in. Pegula was immediately incredulous.

“That was out! Are you kidding me?,” Pegula shouted toward the chair umpire.

Storm head coach Jay Gooding rushed over to mark with his shoe where the ball hit out of bounds. Television replays of the point clearly showed that the ball landed wide. But after a few minutes of arguing, it looked like the chair umpire, who has the authority to overrule the system’s misses, would stand by the initial call. Pegula, shaking her head, took her place beyond the baseline to serve in the tiebreaker, trailing 1-3.

Then there was a sudden change. Upon even further review, the point was given to Pegula, evening the tiebreaker at 2-2. Now it was the Kastles who were incensed. “Show me the proof!” Arevalo demanded of the umpire.

What had been a rather sleepy affair was now full of fervor. When Pegula’s return traveled long to end the tiebreaker, Pera let loose a full-throated scream toward her bench. But Pegula would not become distracted by that narrow loss.

In the next set, mixed doubles, she captured the first break point of the entire match with a strong forehand from the service line directly at Arevalo, who could do nothing with the heat. In the next game, Arevalo returned a Pegula serve into the net, leading to a set point where Rodionova’s return of Pegula’s laser down the middle landed out. Rodionova hurled her racket to the court as Pegula and her teammates celebrated

The Storm’s smiles continued in women’s doubles, where Jurak and Pegula dominated Rodionova and Pera. The highlight of the set was a 20-shot rally in which Pegula fought off a handful of possible winners from all angles with volleys from the service line. Her defense eventually resulted in an unforced error from Pera, causing Orlando’s bench to erupt.

The Kastles (3-4) once led 12-9 in this match. But Pegula’s fantastic play in those doubles sets catapulted the Storm to an 18-14 lead prior to the final set of the morning, where Skupski and Tennys Sandgren concluded the match with a 5-3 takedown of Arevalo and Nick Monroe in men’s doubles.

— The Kastles didn’t break Orlando’s serve once, faltering on each of their six breakpoint chances.

— Washington had claimed 19 of 26 deciding points through their first six matches, but Orlando won four of those six such points Tuesday.

— Sandgren played in yet another tiebreaker during his singles set versus Tommy Paul. He would eventually lose, 5-4 (4). Sandgren has played in eight singles tiebreakers over Orlando’s seven previous matches, posting a 4-4 record.

— Collins was 1-3 in singles action and 2-4 across all sets this season. She had played just two sets in her final three matches with the Storm.

The Storm’s next match will come Thursday against the Vegas Rollers, who trounced Orlando by a score of 24-15 on July 13. The match will be broadcast at 3 p.m. ET on Tennis Channel.

Brian Murphy is a writer based out of Orlando. He helps cover UCF athletics for SB Nation.
You can follow him on Twitter @Spokes_Murphy