Washington Tops Vegas; Snaps Three-Game Skid Thanks To All Around Team Effort 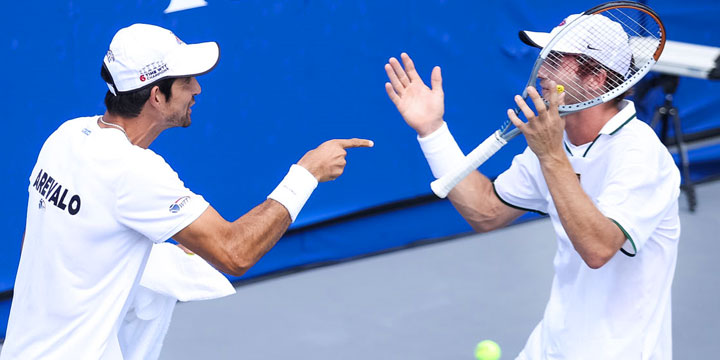 Mired in a three-match losing streak, the Washington Kastles held a meeting and laid out their strategy before Sunday’s match against the Vegas Rollers.

It was clear and simple: come out strong and seize momentum early.

Mission accomplished, as former No. 1 player Venus Williams and  Arina Rodionova made quick work of Kristie Ahn and Asia Muhammad in women’s doubles, winning the first set 5-1, a lead the Kastles (3-3) never relinquished en route to a 24-18 victory.

“I think it’s really important to have a good start,” Rodionova said. “We had a chat before the match and we came out with a clear plan today, which I think made a difference. We were quite pumped up from the start.”

The Kastles won four of the five sets to snap their skid, while the Rollers (3-4) lost their second straight match and for the third time in four outings.

“We tried not to lose our confidence because we played against (first-place) Philly twice and they’re a really good team,” Rodionova said. “It was good to break the (skid). Hopefully we can build from there.”

The Kastles opened the season 2-0, but lost to the two-time defending champion Springfield Lasers, and then fell in back-to-back matches against Philadelphia before facing Vegas.

“I think we had a good start to the season,” Marcelo Arevalo said. “We did whatever we could. We’re happy we got the win today and tomorrow we can enjoy the day off. That’s gonna help the team (bond) together and stay positive for the next match.”

Arevalo teamed with fellow-rookie Bernarda Pera in mixed doubles in what might have been just as pivotal match as Williams and Rodionova’s dominating win in women’s doubles.

Trailing 7-2 in the match, Vegas found momentum and surged back after falling behind 2-1 in the set, with three straight points, breaking both Pera’s and Arevalo’s serve along the way. But when the chair umpire called the Rollers for a time violation before their first serve in the seventh game, it seemingly broke Mike Bryan  and Kristie Ahn’s rhythm, and the Kastles took the final two games to force the first of four straight nine-point tiebreaks in the match.

“He wasn’t wrong with what he did,” Vegas coach Tim Blenkiron said of the chair umpire’s call. “It’s just that there was probably a better way to go about it, a fairer way to go about it. It was a little mind blowing. It’s disappointing to have that happen, but you still got to let it go and move on and we still had opportunities to win that match.”

Up 10-5, the Kastles had what seemed to be plenty of confidence heading into what was supposed to be a nationally televised women’s singles match between Williams and Monica Puig, both Olympic gold medalists. But Ahn subbed in for Puig, who was scratched last minute with an undisclosed injury.

On the surface it appeared to have the makings of an easier match for Williams. On the contrary, Ahn led 3-1, fell behind 4-3, and won the final two games to score an upset over the women’s tennis legend. Ahn – whose career high ranking is 87th on the WTA tour and is currently ranked 96th – provided Vegas with its lone set win.

With the match now at 14-10, Washington’s Tommy Paul faced hard-serving Sam Querrey, who ranks eighth all time with 8,267 aces. And just as Ahn showed no fear against Williams, Paul was up to the task in men’s singles.

Both players held serve through the first eight games, and after falling behind 3-1 in the tiebreak, Paul – named the Guaranteed Rate Player of the Match – rallied with four straight points to take the set, 5-4, and push Washington’s lead back to five, at 19-14.

Vegas’ last hopes fell on the shoulders of Mike and Bob Bryan – the most successful doubles tandem in history – and normally that wouldn’t be a bad thing. But Arevalo and Nick Monroe came prepared and made a statement by breaking Bob Bryan’s serve to start the set.

The Bryans returned the favor and tied the set before both tandems held serve on the way to yet another tiebreaker. Monroe and Arevalo fell behind early, 2-0, but won five of the next six points to seal the match.

“There was definitely chances to get back into that match,” Blenkiron said. “I thought we did pretty well, but our girls are a little bit banged up right now, so we’re just trying to find a solution for that.”

Though Paul was named Player of the Match, the best point of the match may have come from Rodionova in the opening set. After a furious baseline rally between Ahn and Williams, it was Rodionova jumping in at the net for a stunning kill to set up the break point. Washington’s duo finished things off, ultimately sustaining momentum for Washington.

Vegas will face the Orange County Breakers on Tuesday at 7 pm ET/4 pm PT, with the match being broadcast on CBS Sports Network. The Kastles also return to action on Tuesday, when they’ll face the Orlando Storm at 9 am ET/6 am PT against on ESPN2.

Willie Ramirez has covered the Vegas Rollers since their inaugural season. He is a 33-year veteran covering sports in Southern Nevada, and resident of 47 years. He is a freelance reporter in Las Vegas and the Southern Nevada correspondent for The Associated Press. Follow him on Twitter at @WillieGRamirez.