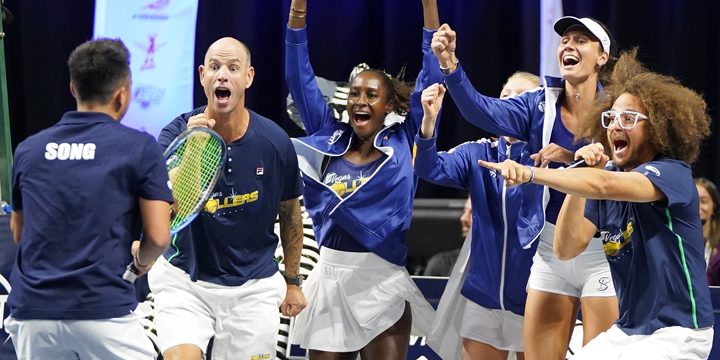 LAS VEGAS – Prior to Monday night’s World TeamTennis match against the Washington Kastles at Orleans Arena, coaches Tim Blenkiron and Redfoo gave the Vegas Rollers an inspirational speech, identifying the importance of putting forth their best effort of the season.

And for the first time in six home matches, the Rollers sealed a victory before the final set.

Fellow Las Vegan Evan Song then blanked Washington’s Jared Hiltzik, 5-0 in Men’s Singles, to provide the final margin, 21-10, giving the exuberant fans in attendance plenty to cheer about as they made their way to center court for a post-match autograph session.

#WTT2019: @MattReid12345 and Evan Song celebrate a big win in Men's Doubles against the @WashKastles to go up 11-10 in the must-win match for the @VegasRollersWTT if they want a shot at the ##WTTPlayoffs.

“We all just got really inspired before the match” said Jaksic, who was called Saturday at her home in Sacramento and asked to finish the season with the Rollers. “I love playing team competitions and this team has been amazing. I’m just so grateful to get an opportunity to play for this team and in the town that I lived in. Everyone was pumping me up, and everyone who knows me knows that I’m a little bit kind of crazy, so I love playing in this environment. It’s been a great experience for my first World TeamTennis match, and I couldn’t imagine it any better.”

The victory kept Vegas’ slim playoff hopes alive, as it improved to 5-7 and is now two games back of the fourth spot in the World TeamTennis standings. The top four teams make the WTT Playoffs.

“Even though the odds are against us, we’re in Vegas, so we play with those odds,” said Song, who hadn’t played since the season-opener in Orlando. “I was itching to play, so it was nice to go out there and play well.”

The Philadelphia Freedoms (10-2) have clinched a spot in the playoffs, which will be held at the Orleans Arena, the Rollers’ home venue. The defending champion Springfield Lasers, San Diego Aviators and New York Empire are deadlocked with identical 7-5 records.

Christian and Marcus Daniell opened the match in dominating fashion, with a 5-1 victory over Muhammad and Matt Reid, as the Kastles’ duo broke two serves to open a 4-0 lead before the Rollers won their first game.

Kostyuk carried the momentum into the second set, where she met Muhammad in Women’s Singles and took an early 2-0 lead. But Vegas’ hometown product came back to win four straight games and pulled out the 5-3 set victory and cut Washington’s lead to 8-6.

Reid and Song gave the Vegas Rollers an 11-10 lead when they got past Daniell and Hiltzik in men’s doubles with a 5-2 set win.

“We started out with a lot of energy but … they’re a really great team,” Christian said.

Despite her team struggling through a tough campaign, Kostyuk said it’s been an exhilarating experience during her first season in World TeamTennis.

Kostyuk is one of two players – along with Christian – who have played with the Kastles since the start of the season. Through 12 matches the teen-aged sensation has played in 76 games – including 32 women’s singles matches – and treasured the moment she teamed with one of the sport’s greatest-ever in Venus Williams.

“This is so important to try this as a player, it’s definitely something that everyone should try,” said the Ukraine-native, who turned 17 on June 28. “It was a lot of fun, but it’s also tough. I’m still young so for me, there’s a lot of stress. The first night (of the season) was really tough for me because there’s the music between the points … I was shaking.”

By Monday, her shaking turned to dancing during the women’s doubles match, as she showed off some moves when the house dee jay played DJ Khaled’s “All I Do Is Win” before she opened the fifth game with her first serve.

Kostyuk, who reached her highest ranking ever in January after climbed to 116th on the WTA chart, and is currently sitting at 198th while her career earnings are a little more than $260,000, has shaken off the jitters and is soaking up the experience she’s gained while playing in WTT.

That includes her time on the court with Williams, plus being able to watch the seven-time Grand Slam single’s champion and learning certain nuances of the sport.

“I got to spend a lot of time with Venus, which not a lot of people have privilege to,” Kostyuk said. “She’s so experienced and she’s aware of all the things that are going on, on the court. She is really inspiring, and it’s just been a lot of fun.”

Now, she can add playing in Las Vegas to her résumé.

“There’s a lot of casinos, a lot of lights everywhere, a lot of people – it’s almost too much,” she said laughingly. “I know that Las Vegas is the city that never sleeps, but it’s very hot. I was in the sun like 10 seconds and it was the warmest weather I’ve ever been. But overall, this season been so much fun. I’ve learned a lot.”

Scouring Ross Hatty‘s professional Facebook page, one may see pictures of Billie Jean King, Elton John, Sharon Stone, Mike Tyson and Martina Navratilova. Hatty, one of the first in Las Vegas to perform the quick-chair massage, is quietly known as a masseuse to the stars.

Hatty was Stone’s personal masseuse during the filming of Casino, during a five-year stretch he spent just as much time at the Muscular Dystrophy Telethon as late-comedian Jerry Lewis, and the list goes on in relieving stress from some of the biggest names to appear on the famed Las Vegas Strip, quietly becoming a household name in Las Vegas’ massage therapy industry for decades.

He’s also been known to visit sales and marketing businesses on Fridays to provide massage therapy and reward employees after a long week.

“For tennis players, I’ve been concentrating on the focusing on all the different things that create blood flow and the elongation of muscles,” said Hatty, who was Lewis’ personal masseuse for 32 years. “It’s been a lot of fun, bigger than I expected and more excitement than I expected – a lot of fanfare.”

The Rollers conclude the home portion of their inaugural season Tuesday night at Orleans Arena, where they’ll host the Orlando Storm at 10 pm ET/7 pm PT. It will be televised on ESPN-plus and on WTT.tv.

The Kastles finish their season in San Diego, where they’ll play the Aviators on Tuesday night at Omni La Costa Resort and Spa at 10:30 pm ET/7:30 pm PT. The match will be televised on CBS Sports Network.