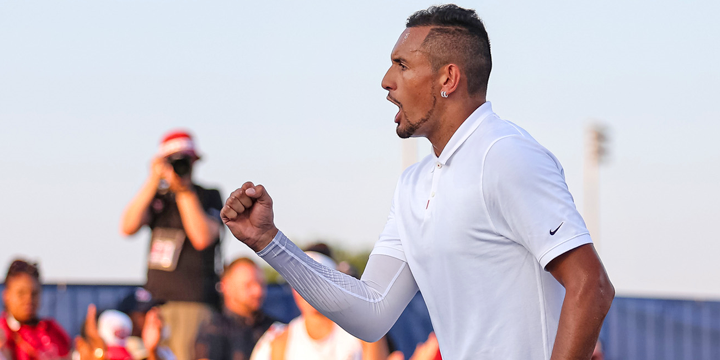 Washington D.C. – The Washington Kastles found their champion form on Saturday in their last home match of the 2019 season.

The six-time WTT champs downed the defending WTT champion and 2nd place Springfield Lasers to cap a historic season in DC. In front of a sold-out crowd at Kastles Stadium on Union Market, Kastles superstar Nick Kyrgios clinched the victory, 23-20, with an underhand serve in extended play.

“This was truly one of the best nights we have ever had,” said Kastles head coach Murphy Jensen afterwards. “Nick Kyrgios winning the match with an underhand serve. I’ve never seen it before. He’s a legend. And to finish like this, at this awesome new stadium, is really special. The fans and whole atmosphere made this a really memorable experience.”

Despite the margin of victory and Kyrgios in the lineup, the Kastles trailed throughout much of the match. In the first set, Lasers stars Abigail Spears and Jean-Julien Rojer scored a valuable win over Kastles doubles star Nicole Melichar and Bruno Soares. After back-to-back breaks off Soares and Melichar, the Lasers leaped off to a 3-0 lead.

The Kastles got a foothold in the set with a break in the fourth game on Spears’s serve and a clutch hold from Melichar in the seventh game, in which the Kastles saved four breakpoints, but Spears ultimately served out the set with an ace, 5-3, to give the defending league champs the early lead.

The Kastles also squandered a chance to run away with the second set in Women’s Doubles.

After taking the first two games off Spears and Lasers rising star Anna Blinkova, Melichar and new Kastles’ sub Jennifer Brady tied the overall score and had chances to shut out the set, but failed to convert six break opportunities in total on Spears and Blinkova’s serves, which preserved the Lasers’s lead. The set ultimately hinged on a tiebreak, which Washington won on Melichar’s serve, 5-4(3), to shrink the Lasers lead to a game, 9-8, but did little to calm Kastles fans, who were itching for a big win.

The next set featured the return of Kyrgios to the lineup for his second season with Washington and should have been no contest, but once again the Kastles found themselves in a tight spot. The former world #13 and reigning Mexican Open champ teamed up with Soares in men’s doubles against Rojer and Lasers rising star Enrique Lopez Perez.

Booming serves and volleys from both teams that sent balls in ever direction into the stands kept the score even most of the set, but up 3-2, the Kastles got a feel for Lopez-Perez’s serve. At 30-all, Kyrgios and Soares blasted back-to-back return winners to score the first break and give the Kastles a chance to serve for the set and a two game lead. At 4-2, Soares earned four set points, but the Lasers denied them all, breaking Soares on a deciding point, then holding Rojer’s serve on a decider, to force a tiebreak.

After Kyrgios held both of his service points and scored a mini-break to take the lead, the Kastles pulled out the set on Soares’s serve, 5-4(1), but the missed opportunities in the previous two games meant there was little room for error in the final two sets. The score was tied at 13-13, instead of a 13-11 lead for Washington at halftime.

The fourth set is where it all happened for Washington. In the blowout set of the night, Brady delivered big time for the Kastles in Women’s Singles. With overwhelming power off the ground and on serve, the former UCLA star and singles world #60 broke Blinkova twice and held serve without facing a breakpoint to seal the set 5-1 and give Washington their first substantial lead of the season, 18-14, heading into the fifth set.

“It was a great win,” said Brady in her on-court interview, “and really great to be a part of the team. It felt good to get a win for Washington.”

With a four game lead, Kyrgios took on Lopez Perez in what turned out to be a very competitive finale to the season. Both players held serve with little resistance most of the set, until the eighth game. Returning up 4-3, Kyrgios earned three match points on Lopez Perez’s serve. But with the match on the line, the Laser saved all of them to send the set to a tiebreak.

Lopez Perez then got ahead in the breaker, taking the early advantage with a mini-break and stealing the set with two forehand winners, 5-4(2) to force the match into extended play. Then down 19-22, Lopez Perez held serve to ratchet up the tension in Kastles Stadium and give Springfield a glimmer of hope.

But any chance of a late Springfield comeback was quickly dashed by Kyrgios in the next game. In classic form, the Kastles superstar fired two aces and hit an underhand serve to clinch the victory, 23-20.

“It was super exciting to get out here,” said Kyrgios afterwards. “I love playing for the team and hope next year I can play more. I love team events. It’s the way tennis should be played. The venue is amazing. The fans are awesome.”

After the loss to the Kastles, the Lasers will remain in 2nd place in the league standings with a 7-3 winning percentage, a match-and-a-half behind the Freedoms. The Kastles are now 2-8 for the season.

The Lasers face the Freedoms in Philly on Sunday, July 28. Watch LIVE on CBS Sports Network at 6 p.m. EST or click here for tickets. The Kastles will finish the season on the road. They play their next match against the Breakers in Orange County on Monday, July 29. Watch LIVE on WTT.tv at Noon EST.