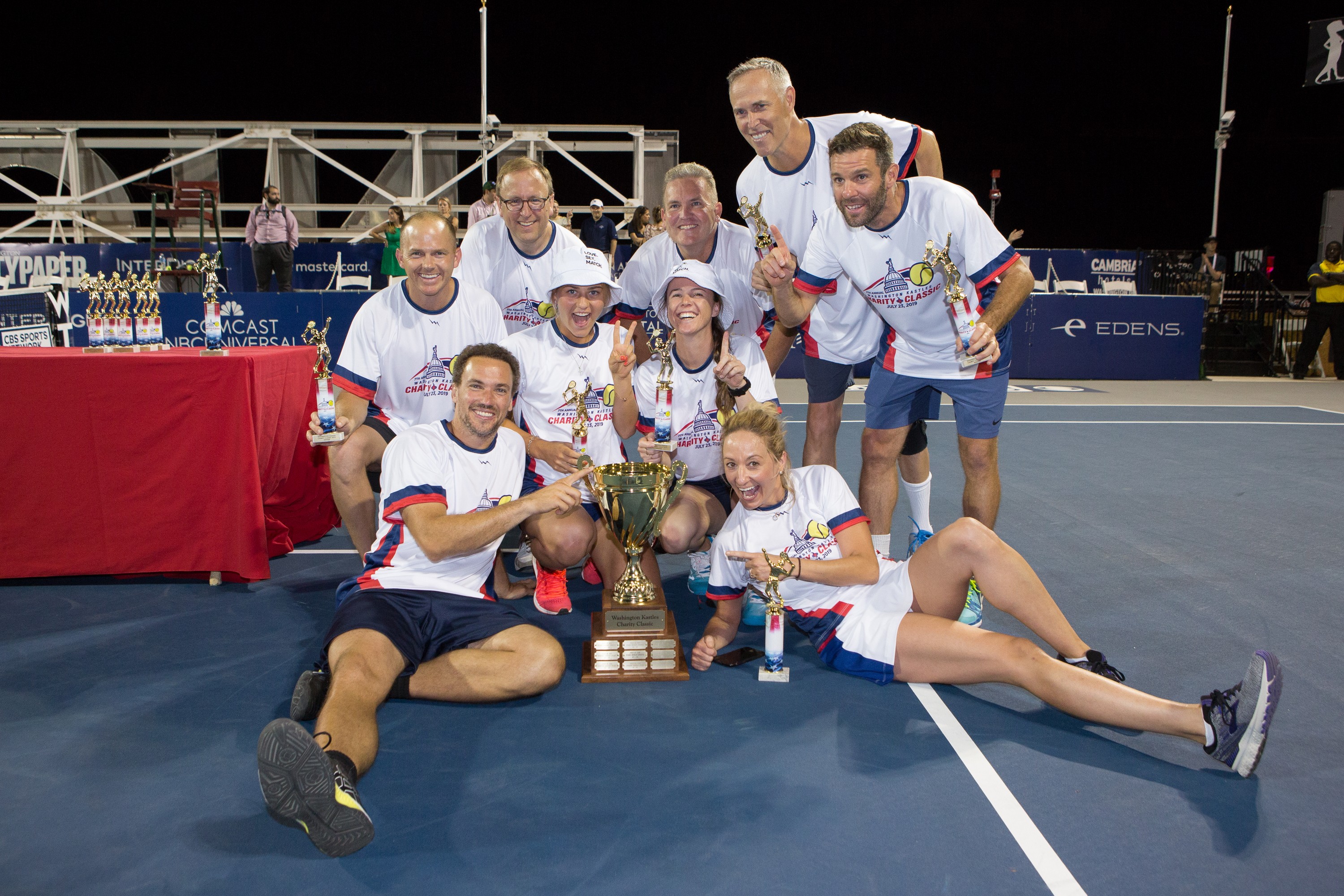 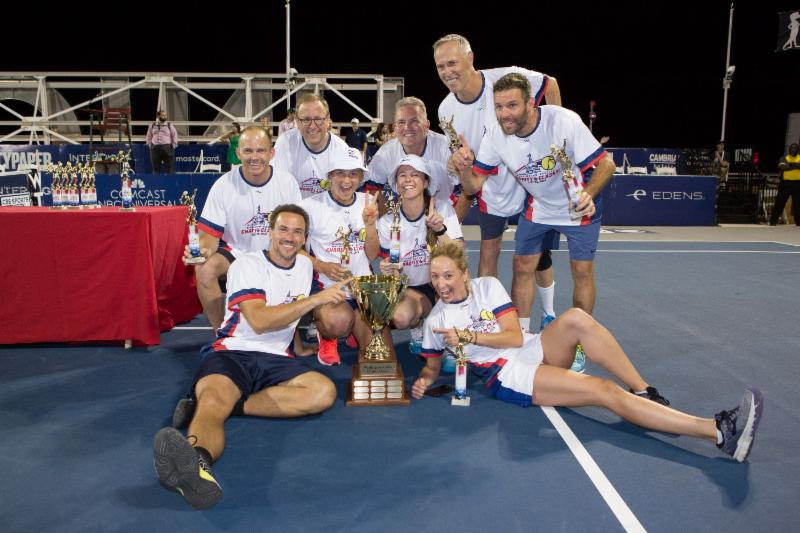 The Stripes took the trophy, but charity won the night at the 7th-annual Washington Kastles Charity Classic. (Photo: Willis Bretz)

It was a battle few outside the beltway would believe.

On center court of Kastles Stadium on Union Market Tuesday night, members of congress and the news media met in the 7th-Annual Washington Kastles Congressional Charity Classic to prove bipartisanship is not dead in this country. The highly-entertaining competition featured a series of fast-paced WTT tiebreak sets, mixing Republican and Democratic members of congress with well-known Washington media personalities and Kastles stars who passionately served it up with one thing in mind: charity.

As always, this year’s roster of participants was comprised of a colorful cross-section of players from both sides of the aisle. Regardless of party affiliation, the competitors were divided into two bipartisan, co-ed teams: the Stars and Stripes. When all the points were tallied at the end of the night, the Stripes beat the Stars, 46-45, but in the end, charity won.

100% of the proceeds were donated to the Washington Kastles’ charitable partners.

Kastles legend and six-time WTT champion coach Murphy Jensen was the master of ceremonies, as well as coach of the Stars. He imparted valuable wisdom to his roster from the umpire’s chair, where he simultaneously cracked jokes that had the crowd in stitches. Tennis legend and Hall of Fame coach Nick Bollettieri, meanwhile, advised his team and made tactical decisions from the bench. 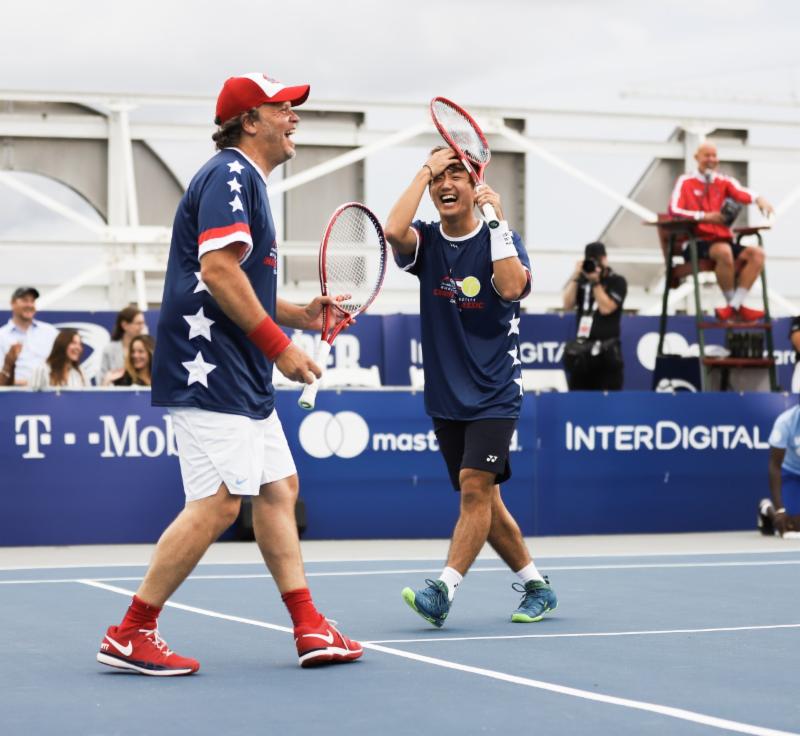 The match began with a highly-entertaining battle between Kastles owner Mark Ein and Kastle rising star Yoshi Nishiokaplaying for the Stars and Kastles all-star Bruno Soares and DC United Head Coach Ben Olsen playing for the Stripes. The set featured dozens of lobs and dozens of overhead smashes that wowed spectators on both sides of Kastles Stadium. Returning at 3-all, Soares hit about a dozen smashes before capturing the point for the Stripes with a tweener, let-chord winner, from netpost to netpost, that electrified the crowd. The Stripes carried the momentum from there. Returning against Nishioka, Soares and Olsen scored the first set to give the Stripes an early 7-5 lead.

Women’s doubles followed, pitting Kastles stars Kveta Peschke and Kaitlyn Christian against each other with news stars Michelle Kosinski (CNN) and Lauryn Ricketts (NBC). The teams were evenly matched. Point after point, Peschke ran around Kosinski for the Stars and Christian ran around Ricketts for the Stripes delighting the fans. But at 5-all, Christian and Ricketts got hot and eked out the set, 7-5, to extend the lead for the Stripes to 14-10. 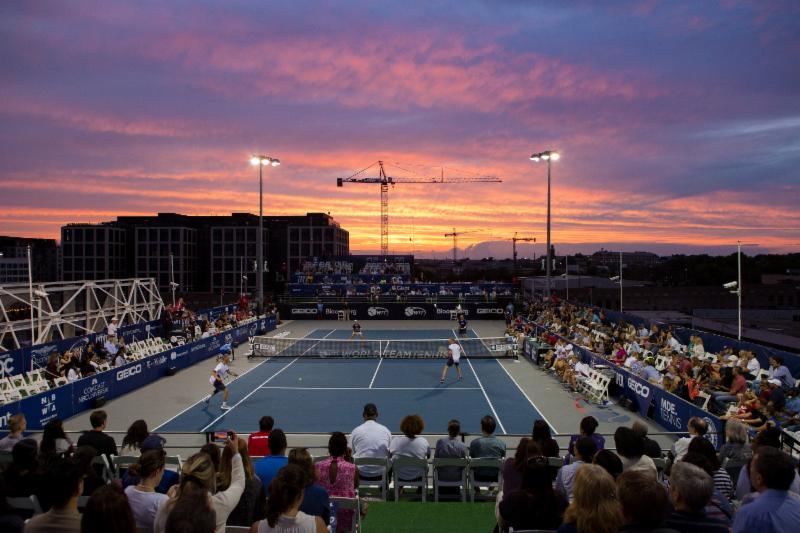 The crowd on both sides of Kastles Stadium were equally amused by the competition. (Photo: Willis Bretz)

In the next set, Congressman and Stripes all-star William Timmons (R-SC) found himself surrounded on all sides by the media. Partnering with Editor-in-Chief of The Hill Bob Cusack, the Congressman jumped off to a 2-0 lead against Stars duo Jeff Zucker, president of CNN Worldwide and NBC News correspondent Hans Nichols. But the Stars struck back to win the next four points, propelled by Nichols’s booming serve. A few errors, however, let the Stripes back in the breaker. Then at 4-all, Cusack served and volleyed two sensational points in a row to retake the lead and the Stripes consolidated their third set in a row on Nichols’s serve, 7-4.

With the Stripes in the lead, 21-14, the Kastles top stars took center stage – without any political baggage. Nishioka and Kveta Peschke rallied for the Stars against Soares and Christian with purpose. This rally-laden contest of dinks and lobs, mixed with giant serves and winners, dazzled the crowd and produced the Stars’ first win of the evening. Nishioka and Peschke prevailed against their teammates, 7-5, to take the fourth set and shrink the Stripes lead to 26-21. 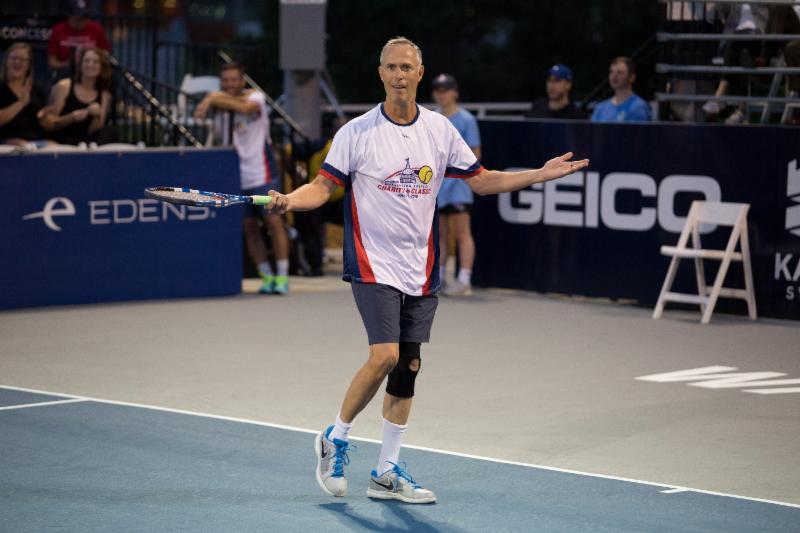 Congressman Jared Huffman pulled off the comeback of the match to score a win for bipartisanship. (Photo: Willis Bretz)

The Stars appeared to be on the verge of another victory in the fifth set. Senator Shelley Moore Capito (R-WV) and former Congressman Charlie Dent (R-PA) earned three set points against bipartisan darlings Congressman Jared Huffman (D-CA) and Congressman Timmons of the Stripes. But down 4-6, Huffman fired three unreturnable serves to score another win for the Stripes and bipartisanship, 7-6.

With the Stripes now firmly in the lead at 33-27, Coach Bollettieri called an intermission and coaxed Coach Jensen out of the umpire’s chair with a challenge that eventually returned the Kastles head coach to his home bench. Then in a surprise appearance, host of CNN’s the Situation Room Wolf Blitzer took the chair to officiate the match and provide satirical commentary for a set. 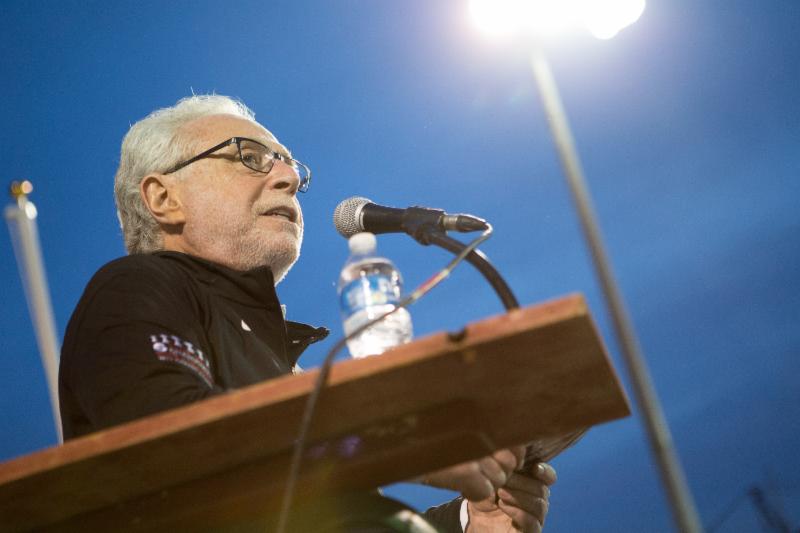 With Jensen in the lineup, the Stars staged a convincing comeback. The three-time WTT Coach of the Year and Zucker jumped off to a 4-0 lead against Soares and Jonathan Karl of ABC News. The Stripes struggled to adjust to the Jensen serve and Zucker’s rejuvenated volley. With inspired energy, the Stars notched the sixth set, 7-3, to shrink the Stripes lead to 36-34 heading into the final event of the night: the “Coaches Choice” set.

This final 10-point tiebreaker started normal enough. Dent and Ein battled for the Stars against Huffman and Timmons for the Stripes, until 4-all. Then the substitutions began. Directed by Coach Jensen, who returned to the umpire’s chair, this wild and zany climax to the competition resembled a fast-paced chess match, where the head coaches of both the Stars and Stripes substituted in and out a wide assortment of players from their rosters to meet the various challenges on opposite ends of the court. 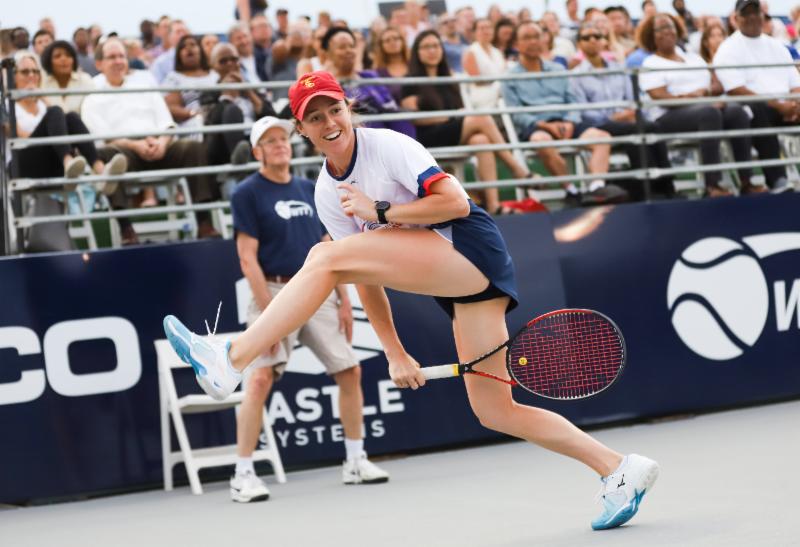 Highlights from this very entertaining finale include a sick tweener from Christian and a forehand winner from Senator Capito against Soares and Christian to earn three match points for the Stars at 9-7. But in the last moments of the match, the Stripes subbed in Kastles teen star Marta Kostyuk, who saved one match point with an overhead smash and shortly thereafter sealed victory for her team with an unreturnable serve to Zucker.

Charity got the purse.