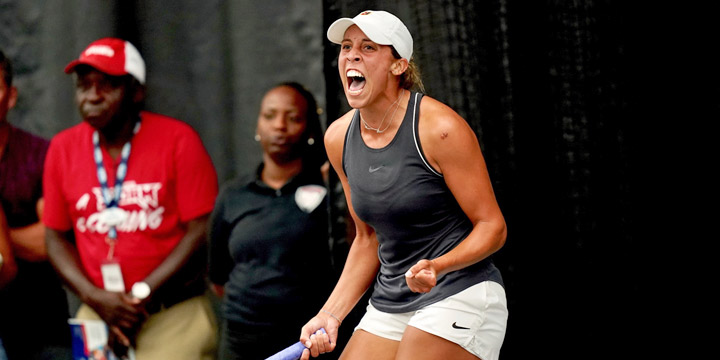 ORLANDO, Fla. – In their first home match in a week, the Orlando Storm snapped their six-match losing streak as they defeated the Washington Kastles by a score of 21-18 on Wednesday night inside the Adidas Performance Center at the USTA National Campus.

“It feels great to be back in the win column,” said Storm head coach Scott Lipsky. “We had a good crowd, we played really well today. We started out with a good set of men’s doubles which kind of got the ball rolling and got the momentum on our side. It was great to have Madison finishing it out, she played a great set.”

With threatening weather in the area all day, the decision was made to play the match indoors at the Adidas Performance Center, the second time the Storm have played a home match in the venue. The match began with Orlando securing the opening game of men’s doubles as Ken Skupski was paired with Evan King for the first time at home this season. Washington’s Bruno Soares and Yoshihito Nishioka answered back with a game of their own, but that was all the two could gather in the set. Skupski and King simply overpowered Washington from the baselines and exceptional finesse at the net. The Storm won the next four games, topping it off with a break on a deciding point in the final game to win 5-1.

When you have @EvanKingChicago + @k_skupski =🎾🔥!
Watch the Orlando Storm and Washington Kastles duel on 📺ESPN+ and track the stats 📊➡️https://t.co/7VWCLv2Y3Z pic.twitter.com/ZPMlNxQsRT

A lefty on lefty match was next as Orlando’s King squared off with Nishioka in men’s singles. Both men held serve through the first four games before King earned a break to go up 3-2. Undeterred, Nishioka broke right back and then held serve to take the 4-3 advantage. King held serve to force a tiebreaker but ultimately fell 5-4 (5-1). The Kastles closed the gap slightly, bringing the match score to 9-6 in favor of Orlando.

Mixed doubles was next as Orlando’s Madison Keys joined Skupski as they stared across the net at Kveta Peschke and Soares. The Storm began the set by holding serve and earning a break at 0-40 to take the early 2-0 lead. The Kastles rallied right back, taking a 0-40 break of their own and then holding serve to knot things up. Both sides hold serve for the next five games, forcing a tiebreak. Orlando grabbed the first three points, but the Kastles pushed back and took four of the next five, forcing a decisive game point. An error at the net cost Washington the set, as Keys and Skupski took mixed doubles by a score of 5-4 (5-4) and gave the Storm a 14-10 lead heading into halftime.

“I had unbelievable partners today in doubles,” said Skupski, “Evan played the best he has all season, he pulled me through. We did well in mixed, too. We got over the line, it’s not easy playing mixed doubles. It was the first time I’ve teamed up with Madison and it was a great experience. She hits the ball bigger than I do; I was basically hoping that she kept hitting winners and she did.”

The Kastles began to mount a comeback in women’s doubles as they matched Jennifer Brady and Peschke against Orlando’s Darija Jurak and Keys. Washington started out strong, winning the first three games of the set, earning a break in the second game. Each side held serve from that point on, resulting in a 5-2 set win for the Kastles, narrowing the gap to a slim 16-15 lead for Orlando.

With the match on the line, Orlando sent Keys out to defend their advantage as she faced Brady on the other side. The two held serve for the first three games before Keys broke Brady to take a 3-1 advantage. Brady broke right back and then held serve, knotting the set at 3-3. Keys locked the match down after that, holding her serve before breaking Brady in the final game to win the set 5-3 and snap Orlando’s six-match skid taking the 21-18 victory.

“Madison played great,” said Lipsky, “Back against the wall a couple of times with no ad points. At three-all, she played some really good points to get the win. It was pretty impressive.”

Despite the poor weather all day around the Orlando area, fans packed the Adidas Performance Center at the USTA National Campus as the Storm were forced to play indoors at home for the second time this season.

The Storm are back in action Friday, July 26 at 7 p.m. Eastern as the defending champions, the Springfield Lasers pay a visit to Orlando. Watch live on ESPN+ or WTT.tv or follow along on WTT.com/scores or at orlandostorm.com. As for the Kastles, they’ll head home to take on the Philadelphia Freedoms on July 25 at 7 p.m. Eastern on ESPN+.