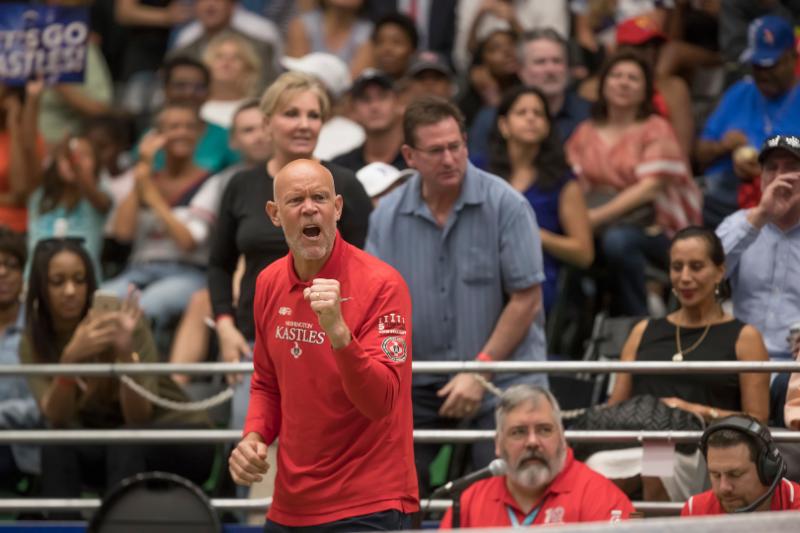 Kastles legend Murphy Jensen will attempt to steer his team to victory against the Storm. (Photo: Camerawork USA)

Tonight, the Kastles begin the second week of the season against the Orlando Storm. The match will feature the return of six-time WTT champion and three-time Coach of the Year Murphy Jensen to the Kastles bench for his eleventh season as head coach. The WTT legend will attempt to steer the Kastles to their first win against the sixth-place Storm, beginning with Yoshi Nishioka in men’s singles.

The Kastles rising star will face three-time All-American Evan King, who made his WTT debut last season as a substitute for the Orange County Breakers. Nishioka will then team up with Kastles all-star and world doubles #7 Bruno Soares, who just returned to the lineup Saturday, to take on King and former WTT champ and 2017 Rookie of the Year Ken Skupski in men’s doubles. In mixed, Soares and former WTT champion and world doubles #1 Kveta Peschke are expected to play Skupski andDarija Jurak, also a former WTT champ. Peschke, who helped lead the Kansas City Explorers to their one and only WTT title in 2010, will sub for new Kastle Kaitlyn Christian.

Kastles teen phenom Marta Kostyuk, who has been dazzling fans around the league this year with her powerful strikes and impressive shotmaking, will take the night off, due to an injury sustained in Saturday night’s match. Former world singles #19 Varvara Lepchenko will sub for Kostyuk in women’s singles against Orlando teen star Whitney Osuigwe. Lepchenko has won main round matches at all four Grand Slams in singles and reached the fourth round at the French and US Opens, and in doubles reached the semis of the Australian Open and quarters of the French Open. 17-year-old Osuigwe is a former junior world #1, and in 2017, became the first American in 28 years to win the Roland Garros girls singles title. The pair will also meet in women’s doubles, with Lepchenko partnering with Peschke and Osuigwe pairing with Jurak.

Weather Advisory: Tonight’s match will be played and is currently scheduled to start on time at 7 p.m. at Kastles Stadium at Union Market.  We will be monitoring the weather throughout the day and in the event of rain, we may have to move tonight’s match to our indoor facility at the East Potomac Tennis Center in Hains Point at 1090 Ohio Dr. SW, Washington, DC 20024.  Stay tuned to further updates on the Kastles’ social media channels and www.washingtonkastles.com.