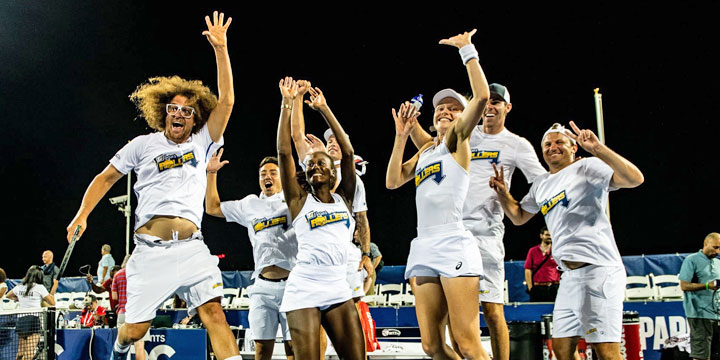 Washington D.C. – On Monday evening, DC sports fans and television viewers around the globe got the first look at the new Kastles Stadium on Union Market, the world’s first rooftop stadium in pro sports history, in the Washington Kastles’ opening match of the season, but the visiting Vegas Rollers were not distracted by the hype and panoramic views. In a historic WTT home opener, the newest franchise in WTT defeated the league’s most formidable dynasty, 22-18.

“We had an absolute blast,” said Rollers head coach Tim Blenkiron, who was also joined by assistant coach and pop icon Redfoo. “Thanks to the Washington Kastles for hosting us in this incredible new venue.”

Rollers Matt Reid and Asia Muhammad set the tone early against Kastles duo Yoshi Nishioka and Shelby Rogers in mixed doubles in the opening set of the night. The Vegas pair broke Rogers’s serve early to go up 2-1 and followed with sharp serving, volleying, and returning in the games that followed. The Rollers proved to be unbreakable in the set. Despite a strong hold from Rogers in her second service game, Las Vegas was able to take the first set, 5-3.

The Rollers then ran the table in the next set, which featured a clash of rising stars between new Kastle Marta Kostyuk and Rollers rookie Harriet Dart in women’s singles.

Kostyuk is a promising, 16-year-old, former US Open Junior champion from Ukraine. Dart is a 22-year-old British phenom, who just made a run to the third round of Wimbledon. Both have bright futures ahead, but in DC, it was Dart’s night. Kostyuk surrendered the set, 1-5, giving Las Vegas a hefty 10-4 lead.

The Kastles rallied in the third set. DC’s hometown hero Frances Tiafoe and Nishioka fired on all cylinders against Reid and 6-foot-11-inch tennis giant Reilly Opelka in men’s doubles. Neither team dropped serve during the set, but in the tiebreak they exchanged mini-breaks on both the Tiafoe and Opelka serves to draw even at 2-all. Then after Nishioka won both his service points, the Rollers faced three set points on Reid’s serve. The Rollers doubles star saved two of them, but at 4-all sparks flew.

Tiafoe cracked a solid cross-court return and followed it to net. A series of crisp volleys followed across both sides of the net, from all players, until finally Tiafoe got a good look at a put away and belted the winning shot to take the set, 5-4, but only shrinking the Rollers’ lead by a game, 14-9, at half-time.

The Kastles had a big opportunity in the fourth set to get back in the match. In perhaps the most inspired play of the evening, Kostyuk and Rogers shot off to a commanding 4-1 lead against Muhammad and Dart in women’s doubles. But when Rogers served for the set, the Kastles suffered a letdown and allowed the Rollers to break and eventually even the game score to force a tiebreak. The Kastles then let an early lead in the breaker slip away that cost them the set, 5-4, but more importantly, halted their chance of a comeback.

Instead of a 15-14 match with the Kastles trailing by a single game, the score was 19-13 in Las Vegas’s favor.

That left Tiafoe with a tough assignment against Opelka in the final match of the night. The Kastle couldn’t simply beat him in a tiebreak, he needed to knock the giant out, which he managed to do. After holding to go up 3-2, Tiafoe seized on a double fault and a second serve to score the sole break in the set. He then held serve to take the set 5-2 and send the match into overtime.

Trailing 18-21, Tiafoe had to win three games to keep the match in play for Washington. But serving to score his team’s first WTT win ever, Opelka didn’t falter. The Roller held at love to secure the victory for Vegas, 22-18.

It was definitely a historic home opener. Vegas scored their first WTT victory against the six-time WTT champion Washington Kastles in the team’s debut match at the new Kastles Stadium on Union Market.

Rollers assistant coach and pop icon Redfoo put on a show for the Who’s Who of Washington.

Next up, Kastles play Aviators in DC, Rollers play Empire in New York on Tuesday, July 6 at 7:00 p.m. EST. Can’t make it to the stadium? Watch the action LIVE on ESPN+/WTT.tv and follow results on WTT.com.