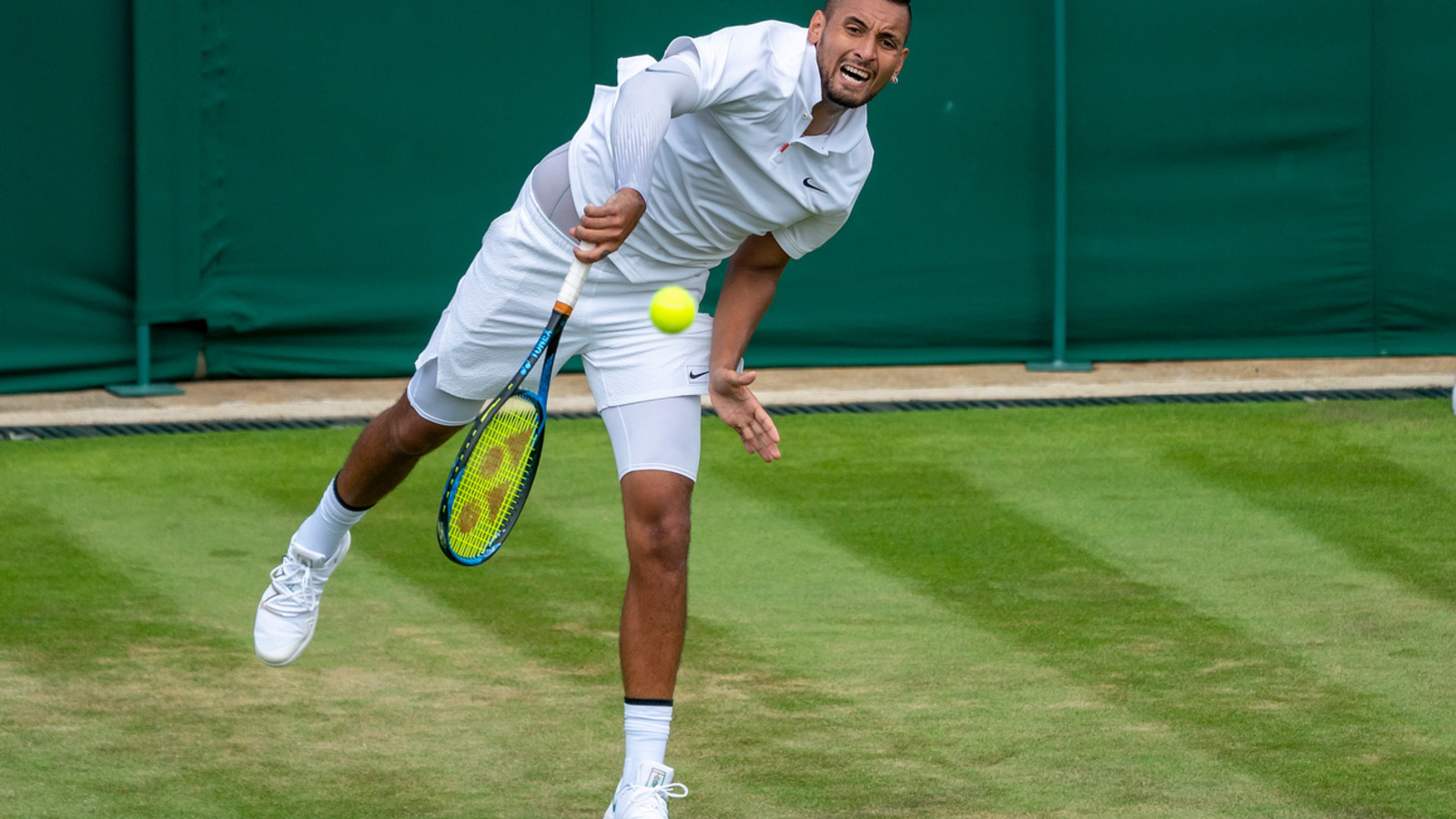 The Australian former world #13 and reigning Mexican Open champion put on another classic performance yesterday in front of a jam-packed audience inside Court 3 of the All England Club against compatriot and former doubles partner Jordan Thompson in the first round of the 2019 Wimbledon Men’s Singles Championship.

In front of his father George and sister Halimah, Kyrgios battled with himself, his opponent, and officials for nearly three-and-a-half hours in a topsy-turvy drama that had fans and commentators on the edge of their seats through the handshake at the end of the match. In the end, Kyrgios prevailed, 7-6(4), 3-6, 7-6(10), 0-6, 6-1, to secure a widely-anticipated encounter with world #2 and reigning French Open champion Rafael Nadal in the second round of the tournament.

“I was very motivated today, but I wasn’t looking forward because I knew that Thommo has been playing very well,” said Kyrgios in his post-match press conference. “He was more than capable of winning today, as well. There were a couple moments, if they went his way, he could have been easily the one in this chair at the moment.”

Click here to see Nick LIVE in DC in the Kastles’ last home match of the season against the 2018 WTT champion Springfield Lasers on July 27!

The match quickly drew widespread interest when Kyrgios appeared in danger of losing the first set. A string of unforced errors put him in an early hole, 1-4. But the Kastle promptly bounced back to even the set at 5-5, and after both players held serve in the following two games, the first set came down to a tiebreak. At this point, Kyrgios seemed to assert control over the match. Charging off to a 4-2 lead when the players changed ends in the breaker, he crunched two aces to notch the first set.

But the contest shifted in the second set, as Thompson’s grinding tactics began to take their toll. He broke Kyrgios in the seventh game to take a 4-3 lead and held his next service game to consolidate the gain. This time Kyrgios couldn’t come back. Another loose service game handed Thompson a second break and the second set. Afterwards, Kyrgios called for a medical timeout, requesting treatment for his left leg.

Locked at one-set apiece, the third set is where the major entertainment kicked off. It took an hour and 16 minutes to complete and featured dazzling shotmaking, tweeners, even an under-arm serve, and animated clashes with officials. The tension peaked when, down 4-5, Kyrgios questioned the chair umpire about what he believed to be a poor call from the line judge.

“I’m playing for hundreds of thousands of dollars out here,” complained Kyrgios, in a style that has sometimes drawn criticism from the tennis establishment. “Why is the linesman not getting fined? Tell me. Why? Does he get fined?”

Kyrgios received a code violation for the outburst, but his opponent was just as fiery. Thompson received a similar code violation after he threw his racquet at the baseline, and had just as many gripes with the line calls as his countryman.

“Every time the score gets tight, the linespeople get tighter than the players,” Thompson told the chair umpire. “It’s unbelievable.”

As disruptive as the outbursts may have been, they only seemed to fuel the quality of the competition, as both players raised their game to force a tiebreak to decide the third set.

Kyrgios shot ahead in the breaker, 5-2, and appeared to be well on his way to retaking the lead and momentum of the match, but Thompson scrambled to win the next three points and even the score. Kyrgios wrestled back the advantage by winning the next point to earn his first set point at 6-5, but again, Thompson fired back with an eye-popping forehand winner. Ultimately, it took eight set point opportunities for Kyrgios to take the epic breaker, 12-10, as Thompson put up maximum resistance.

In stark contrast, the fourth set lasted only 18 minutes. It appeared as if the effort it took for Kyrgios to win the previous set completed depleted him. Within 11 minutes he trailed 0-3, failing to win a point in his second service game. In the end, Thompson won 24 points to Kyrgios’s five to score a bagel for the fourth set and even the match.

But just when Kyrgios looked defeated, he powered back with near flawless focus, losing just a single game to take the fifth set and secure his seventh career meeting against former world #1 and 18-time Grand Slam champion Rafael Nadal.

Elsewhere for the Kastles, DC phenom Frances Tiafoe lost a very close match against world #10 and 2019 Monte-Carlo champ Fabio Fognini in the opening round. The Kastles all-star fought hard, and came back from a break down to take the fourth set and force a fifth set decider, before ultimately yielding to the Italian, 5-7, 6-4, 6-3, 4-6, 6-4.

Don’t miss Nick & Frances, and all your favorite Kastles stars this summer! Less than 75 individual tickets left for the season, and they won’t last long! Get yours now at Ticketmaster!