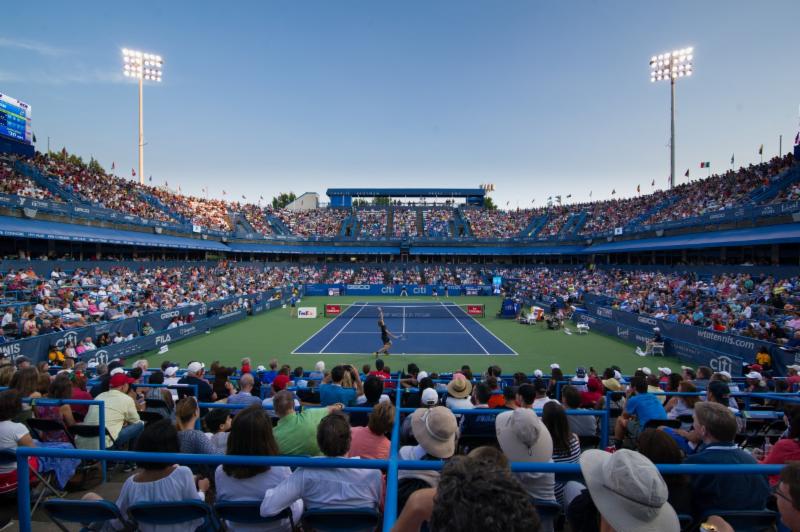 In 2008, Washington native Mark Ein transformed tennis in the nation’s capital with the Washington Kastles, the first World TeamTennis franchise in DC history. His unwavering commitment to an unparalleled player-fan experience instantly won the support of the greater metro community. DC sports fans cheered the team to win a historic six WTT championship titles and set the longest winning streak in pro sports history. Twelve years later, Ein is back at it again.

Today, officials announced the DC-based venture capitalist has acquired the management rights of the Citi Open from the Washington Tennis & Education Foundation (WTEF) and secured the future of pro tennis in DC. The announcement was made at Rock Creek Park Tennis Center, where the historic tennis tournament has been held since 1969.

After a six-month bidding process that attracted worldwide interest, Ein emerged as the clear choice to take over the tournament with his commitment to keeping the event in the nation’s capital and providing ongoing support for WTEF. As part of the agreement, Ein made a significant financial contribution and substantial future financial commitments that will enable WTEF to build its endowment to further the charity’s mission and ensure its financial future as part of the agreement. The WTEF and their programming will continue to benefit from the Citi Open and be featured prominently throughout the week-long event as the primary charitable partner and beneficiary.

Ein, a native of Chevy Chase, Md., grew up close to the tournament site, served as a ball kid at the tournament for many years in his youth and has attended the event throughout his life.

“I grew up with this tournament and I know first-hand the profound impact it can have on individuals like myself and on our community more broadly, so I am thrilled that we were able to come to an agreement to keep this very special event here in Washington,” said Ein. “This is an iconic tournament on the world stage that has been woven into the fabric of our local community across many generations. I am grateful to the board and leadership of WTEF for working with me to keep the event here, and we now need the continued engagement of the NPS, city leadership and our business and tennis communities to make sure this tournament remains in the District for future generations to enjoy.”

The deal garnered widespread approval from the greater DC community.

“It wouldn’t be summer in the sports capital without the Citi Open,” said Mayor Muriel Bowser. “For 50 years, Washingtonians have gathered to watch the top tennis players compete at the Rock Creek Park, and over time, DC has transformed into a town where young athletes can not only play top-level tennis, but also thrive in it. We are grateful for Mark Ein’s leadership and look forward to many more years of hosting the Citi Open in Washington.”

“After 50 years of tradition, I am thrilled to be keeping this important event in our community, especially for our children who benefit immensely from it,” said Manny Ortiz, WTEF Board Chair. “With the hard work of our organization and new management, I’m confident the best versions of this tournament are forthcoming.”

The Citi Open is one of the five largest tennis events in the United States and one of only five tour events featuring players from both the ATP and WTA Tours competing simultaneously. After fifty years, it is also the longest running pro tennis event at the same site in the United States. Since the first event in 1969, the men’s tournament has brought some of the Tour’s great champions to the nation’s capital over the past five decades, including Arthur Ashe, Jimmy Connors, Michael Chang, Andre Agassi, Andy Roddick, Bob and Mike Bryan, Juan Martin del Potro, John Isner and Alexander Zverev. The WTA event, which was added in 2012 as a WTA International level tournament, has boasted singles champions that include Sloane Stephens and Svetlana Kuznetsova.

Ein is known throughout the District for his widespread philanthropy, civic leadership as well as his successful business ventures. As the Founder and CEO of Venturehouse Group, LLC and Capitol Investment Corporation, Ein has been involved in the founding or early stages of six companies that have been worth over one billion dollars and has led over $1.8 billion of private equity, venture capital and public company investments many of which were located in the Greater Washington area. He is currently the majority owner of leading security company Kastle Systems, and, following significant investments, is Chairman of Lindblad Expeditions and Vice Chairman of Cision. Ein was a 2018 inductee into the Washington Business Hall of Fame, and has been honored with the Jefferson Award, the nation’s highest honor for public service.

In September 2009, Washington DC Mayor Adrian Fenty presented Ein with the Key to the City, highlighting his Washington Kastles success on the court and, “for their commitment to the District’s communities and our youth.”

Serving as Board Chair of the DC Public Education Fund since 2010, Ein has worked with leading local and national philanthropic organizations to raise $120 million of support for the Washington D.C. public school system. In addition, he currently serves on the boards of the DC Policy Center, Federal City Council, DC College Access Program and the Smithsonian National Museum of Natural History. He formerly served on the Board of the United States Tennis Association from 2012-2018, and is currently a Presidential Appointee to the USTA Board as well as on the Board of the International Tennis Hall of Fame. He was inducted into the Mid-Atlantic Tennis Hall of Fame in 2012.

Over the past year, Ein has created a new sports, entertainment and media holding company which owns and manages several iconic properties that share a mission of bringing the Washington, D.C. community together through creating extraordinary and memorable events to a diverse set of audiences while supporting local charitable partners.  In addition to the Citi Open and the Kastles, Ein recently founded the Washington Justice, a new expansion franchise in the premier global esports Overwatch League and acquired the renowned weekly Washington City Paper that has served the Washington, D.C. metropolitan area since 1981.

Citi Open’s transfer of management to Ein comes at a pivotal moment for the tournament, which marked its 50th anniversary last summer. The tournament will continue to be played at the Rock Creek Park Tennis Center, which is owned and operated by the National Park Service and its concessionaire, Guest Services, Inc. Ein says the first priority will be to address much-needed facility updates for the half-century old stadium and grounds that are needed to secure the long-term future of the tournament at this site and for the city. He has already engaged NPS and government officials to solidify plans that would not only raise the profile of the tournament but would renovate and modernize the facility as well as benefit its community members in Ward 4 and surrounding neighborhoods on a year-round basis.

Season ticket prices will not increase in 2019!

In the immediate future, Ein looks to enhance the overall fan experience including significantly upgraded food and beverage offerings, improved grounds, new hospitality areas available to all fans, better parking and ride-sharing logistics, on-site entertainment and complementary activities such as pickle-ball showcases and upgraded merchandise. In appreciation to the fans that have helped build the event over decades, the new team also has announced that Citi Open season ticket prices will not increase in 2019 and Kastles season ticket holders will get offers to add Citi Open ticket packages at special discounts.

“We have big plans for this tournament, all centered on making the Citi Open an unmatched experience that will appeal to and be affordable for all Washingtonians making it THE place to be for each of those nine days and nights in D.C.,” said Ein.

With regard to the player experience, Ein added “We are committed to making this one of the most player-friendly tournamentson tour with new concierge and player services that will significantly enhance the athletes’ overall experience while playing in the event and being in Washington, D.C., one of the most popular tourist and visitor destinations in world.”

Leading up to his official management control of the tournament, Ein has already negotiated an extension of Citi’s title sponsorship agreement through the 2019 event. The global banking leader has been involved with the Washington tournament since 2012.

Ein has also closed a deal with host broadcast partner, Tennis Channel, to renew its agreement for another five years. Fans can watch and stream men’s and women’s action from first ball to last from July 29-August 4 on Tennis Channel and Tennis Channel Plus. Tennis Channel is expected to televise around 160 hours of coverage from four courts at the Rock Creek Tennis Center.

The tournament will return to the United States Tennis Association’s US Open Series for the first time since 2014 pending ATP Board approval. Citi Open, which is home to the only ATP 500 tournament in the U.S. and one of only 13 around the world, rejoins the summer hard-court swing of men’s and women’s tournaments leading up to the US Open. The US Open Series provides a centralized promotional platform for the sport in North America, showcasing the best players in the world as they compete throughout the U.S. and Canada. Other US Open Series cities include: Atlanta (ATP), San Jose (WTA), Toronto (WTA), Montreal (ATP), Cincinnati (ATP/WTA), Winston-Salem (ATP).