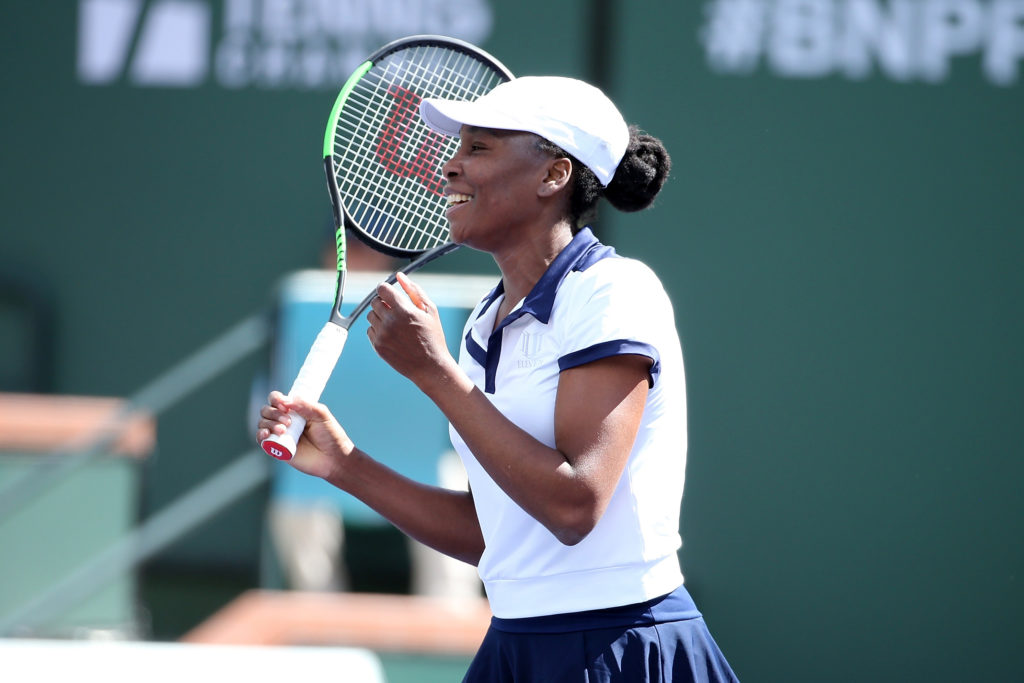 Indian Wells is on!

Kastles superstar Venus Williams had to fight hard to get past her first round opponent at the 2019 BNP Paribas Open in Indian Wells yesterday. The seven-time Grand Slam singles champion and California-native prevailed, 6-4, 0-6, 6-3, over world #68 Andrea Petkovic to advance to the second round of her hometown tournament. Williams faces world #3 Petra Kvitovanext.

“Thank you everyone for getting behind me,” said Williams to the crowd after the win. “I played a tough match and played a great opponent. It was great to be back home in Southern California and get a win.”

Petkovic was a tough first round opponent. The 31-year-old German has been ranked as high as #9 in the world and has been playing very well lately. She reached the quarterfinals of Brisbane this January and was tied with Williams, 2-2, in their career head-to-head going into the match.

Playing in just her first tournament since the Australian Open, Williams started the match a little sluggish, at one point falling behind 1-3 in the first set. But the Kastles star quickly rallied her serve and groundstrokes to even the score at 4-all and pulled ahead for the first time in the match after breaking Petkovic with a series of high-pressure forehands. The effort clearly took a toll.

Up 5-4, a trainer came on court during the changeover to check Venus’s blood pressure, then called for the tournament doctor. After a five-and-a-half minute medical timeout, Williams returned to the court and captured the first set with an ace, 6-4, as if nothing was the matter. But the Kastle suffered a letdown in the next set.

A re-energized and highly-motivated Petkovic tightened up her game, while Williams appeared increasingly lethargic. The German fired seven winners, won all her second-service points, and didn’t face a breakpoint to take the second set, 6-0. By contrast, Williams committed 14 unforced errors to only five winners.

But if Petkovic seemed invincible at the start of the third set, Williams rapidly turned the momentum around.

Venus broke Petkovic’s serve to start the decider on top and proceeded to blast the German into submission with her signature penetrating groundstrokes. Williams suffered a hiccup serving for the match at 5-2. The Kastles champ unexpectedly found herself down 0-40, but managed to pull the score back to deuce, then reached match point after Petkovic sent a forehand long. But Williams double faulted, squandering the chance and then made two consecutive forehand errors to drop serve and lend Petkovic a lifeline.

The German nearly capitalized on the good fortune. She earned a game point with her serve at 5-3, but Williams saved it with an overhead smash to force another deuce, which ultimately broke Petkovic’s spirit. Venus won the next two points and the match with unforced errors by the German.

Next up, Venus will play world #3 and 2019 Australian Open finalist Petra Kvitova for a spot in the third round. Kvitova leads their head-to-head, 4-2, but all of their matches have gone three sets and Williams won their most recent meeting in the quarterfinals of the 2017 US Open.

“We haven’t played in a couple years,” said Williams about her next opponent. “She’s been having a great last year.”

Elsewhere for the Kastles, Dover, Delaware native Madison Brengle upset 2011 US Open champ Sam Stosur in her first round match, 6-2, 6-3. Brengle faces #11 seed Anastasija Sevastova next for a spot in the third round. Sevastova leads their career head-to-head, 1-0.