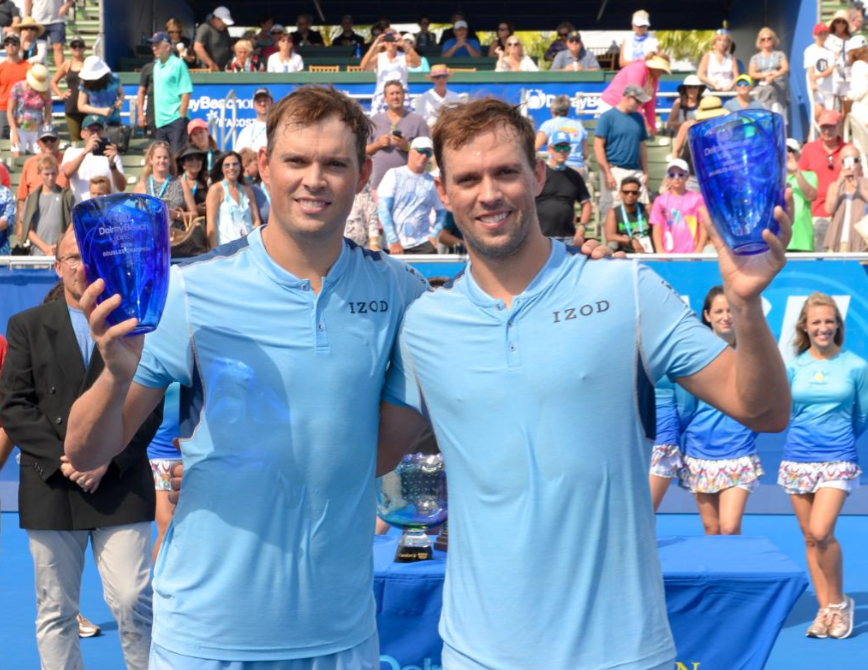 Bob and Mike are back in the winner’s circle, again!

Kastles doubles superstars Bob and Mike Bryan enjoyed a sunny trip to Florida this past week. After a dominant performance in the early rounds of the 2019 Delray Beach Open, the greatest men’s doubles team in history defeated WTT sibling doubles stars Neal and Ken Skupski in the final, 7-6(5), 6-4, to claim their fifth Delray Beach title and 117th career title as a team.

Kastles fans may not be surprised by the feat. In their three seasons headlining for DC, the Bryans have been unbeatable at Kastles Stadium and on tour have been even more impressive. Delray Beach marked the 175th career final for the 18-time Grand Slam champs, but it was the first final appearance for Bob since the Madrid Open last year, where he suffered a hip injury that required major surgery that sidelined him for over six months.

“We’re very, very pleased with how this one’s gone,” Bob said after the win in Delray Beach. “Expectations, I think for me, have been a little lower than they have in the past. We’ve just been trying to have fun and enjoy our time together and it’s actually resulted in some really good play. To win here now in my home tournament and to have my family here to take it in with me is extra special.”

If Bob felt insecure, you never would have known it. The brothers cruised to the final without dropping a set. They beat James Cerretani and Marcelo Arévalo, 6-3, 7-5, in the semifinals, which must have been a huge confidence booster. Cerretani and Arevalo upset #3 seeds Tim Putz and Kastles doubles star Robert Lindstedt in the quarterfinals. The Bryans fell to Lindstedt and Canadian former singles world #3 Milos Raonic in the first tournament of Bob’s comeback this January in Brisbane.

Before that the brothers defeated French duo Adrian Mannarino and Hugo Nys, 6-3, 7-5, in the quarters. Mannarino and Nys knocked out fellow Kastle Tennys Sandgren and New York Empire Star Steve Johnson in the first round. And the Bryans got started with a win over Germans Kevin Krawietz and Andreas Mies, 7-6(5), 7-6(3), in the opening round.

While the win over Krawietz and Mies was their most challenging match of the tournament – on paper – the final against the Skupski brothers was the Bryans’ most difficult match since their Madrid Open quarterfinal win last year over former Kastle Bruno Soares and former world #1 Jamie Murray, 6-4, 6-7(4), 10-7. The Bryans sailed to victory in the semis over Pierre-Hugues Herbert and Nicolas Mahut, 6-1, 7-6(2), before retiring, 3-5, to Nikola Mektic and Alexander Peya in the final.

The Skupski brothers posed a true threat. Ken famously led the Orange County Breakers to win the 2017 WTT title, before retiring from league competition, and Neal is currently the New York Empire’s MVP and one of the best doubles players in the league. The final was the first ATP doubles final featuring two brothers teams since 1977, when Vijay Amritraj and Anand Amritraj beat John Lloyd and David Lloyd, 6-1, 6-2 at The Queen’s Club in London.

The biggest discrepancy between the teams was on serve. The Bryans cranked 12 aces and no double faults, while the Skupskis hit seven aces, but served up seven double faults.

The teams traded breaks in the opening set, but the Bryans took the tiebreak with a 1-2 punch – a serve, then volley winner. The Skupskis struggled to put the first set behind them, as Neal contributed two of their seven double faults for the match in the opening game of the second set. The Bryans earned the break, the only one they’d need in the second set.

“I was truthfully a little extra nervous (serving for match),” said Mike after the match. “To get down love-30 and dig deep and win four points in a row, that was really cool. And to just get Bob across the line again and holding up a trophy.”

“We don’t want to stop here,” added Mike. “We want to keep rolling and hold up bigger trophies, hopefully a Masters series in the near future and then a GS [Grand Slam].”