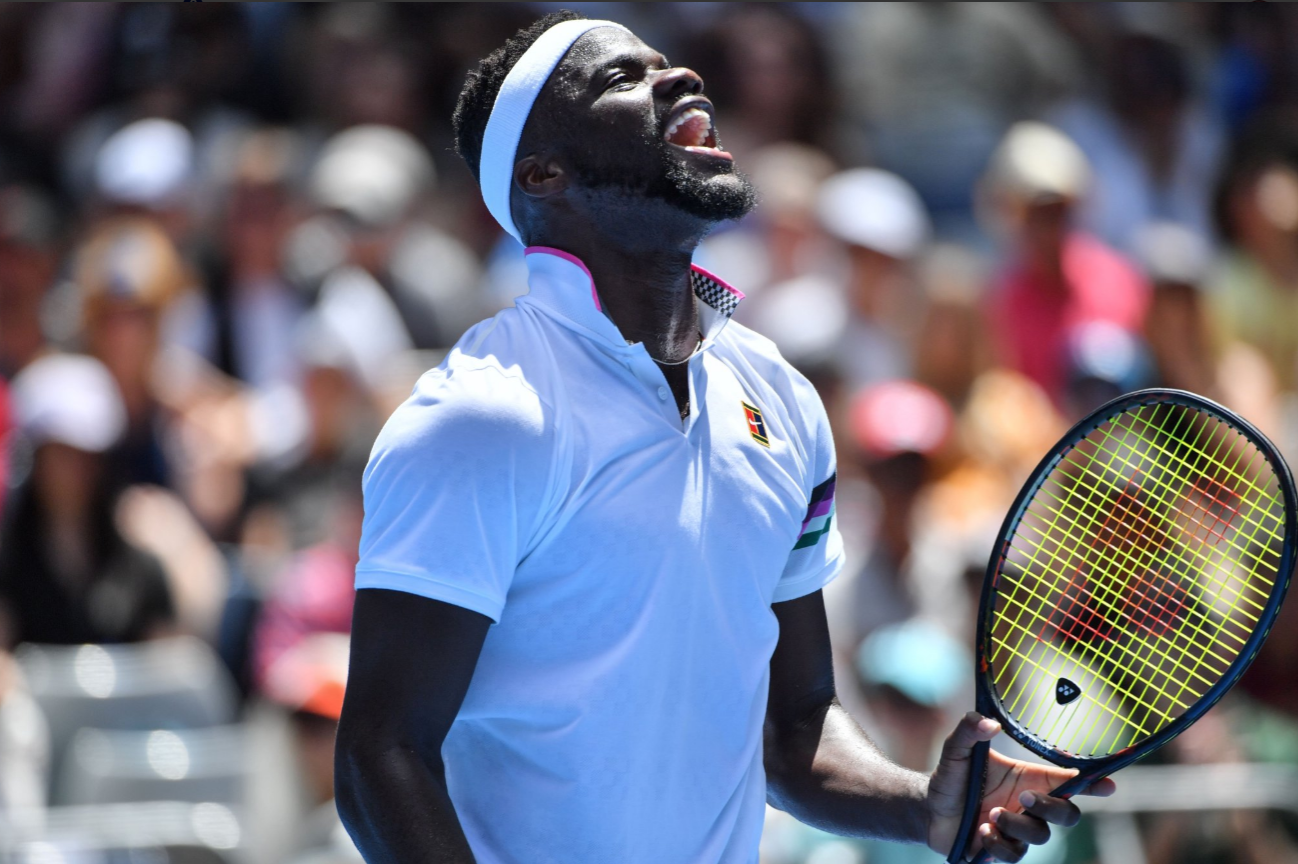 Big Foe continues to soar Down Under!

On his 21st birthday, Kastles all-star Frances Tiafoe received an incredible present in Melbourne Park, although it was less of a gift and more a reward for painstaking hard work and patience since he turned pro in 2015.  In an electrifying performance that moved a packed stadium of Aussie tennis fans to spring to their feet and chant “Tiafoe! Tiafoe!” like it was Kastles Stadium, the DC phenom downed Bulgarian former world #3 and #20 seed Grigor Dimitrov, 7-5, 7-6(6), 6-7(1), 7-5, to reach the quarterfinals of the Australian Open, his best result at a Grand Slam to date.

Next up, Tiafoe will face world #2 and 17-time Grand Slam champion Rafael Nadal.

The combination of his fearless tennis and emotional post-match celebrations has turned Tiafoe into a global sports sensation. Deadspin likened him to NBA star LeBron James.

“It’s crazy, man,” said Tiafoe after the milestone victory. “I obviously am not a normal tennis story. At the beginning of my career, I was trying to do everything for my family. Now I put them in a great place, I’m trying to do it for me.”

The win erased any doubts about Tiafoe’s potential to breakthrough at the highest level of the game. He is now the youngest American to reach the Australian Open quarterfinals since 20-year-old Andy Roddick advanced to the semifinals in 2003. The win also ensured the College Park native will lock in a top-30 ranking by the end of the tournament.

Dimitrov knew Tiafoe would be a tough opponent heading into the match. The Kastles all-star, currently ranked #39, earned the biggest win of his young career upsetting WTT superstar and #5 seed Kevin Anderson (Philadelphia Freedoms) in the second round, followed by his first five-set victory over Italian world #35 Andreas Seppi. And though Dimitrov won their sole prior meeting at the Rogers Cup last summer, Tiafoe pushed him to three, tough sets, 7-6(1), 3-6, 7-6(4).

“He’s going to be dangerous to play,” said Dimitrov about Tiafoe before the match. “He’s going to be excited. It’s a new ground for him. So, yeah, I don’t expect it to be an easy match at all.”

The conditions couldn’t have been better for the fourth round clash. Tiafoe fought through a gritty opening set to capture the early lead. He broke Dimitrov in the seventh game to take a 4-3 advantage. But as the set progressed, the Bulgarian began to find his rhythm on the Kastle’s serve and broke back to level the set at 5-all. Tiafoe’s focus, however, didn’t drift. He broke back immediately in the next game and held comfortably to take the opener after 52 minutes.

But it was in the second set that the 21-year-old truly shined.

With his back against the wall in the second set, Tiafoe clawed back from a 4-2 deficit to force a tiebreak, where he pulled off a small miracle, coming back from 5-2 down and saving two set points. A sublime half-volley drop shot leveled the breaker and a forceful forehand winner captured the set, handing Tiafoe firm control of the match.

But Dimitrov would not go down without a fight. Trailing 2-4 in the third set, the Bulgarian broke Tiafoe’s serve and found a second gear, forcing another tiebreak, which he dominated, dropping just a single point, to take the third set. The comeback was short-lived, however. It was Tiafoe’s day.

Despite calling for the physio for muscle cramps, Tiafoe would not surrender the match. With Dimitrov leading 5-4 in the fourth set, the Kastle bounced back, winning 12 of the last 14 points to clinch the victory. All totaled, Tiafoe fired 63 winners and 10 aces to prevail in three hours and 39 minutes.

The win sets up a quarterfinal showdown against world #2 and 17-time Grand Slam champion Rafael Nadal, who defeated 2010 Wimbledon finalist Tomas Berdych, 6-0, 6-1, 7-6(4), in the fourth round. It will be the first career meeting between the two players.

Tiafoe’s victory also marks the second straight year in which an American has reached the last eight at the Australian Open, with Kastles teammate Tennys Sandgren achieving the feat in 2018.