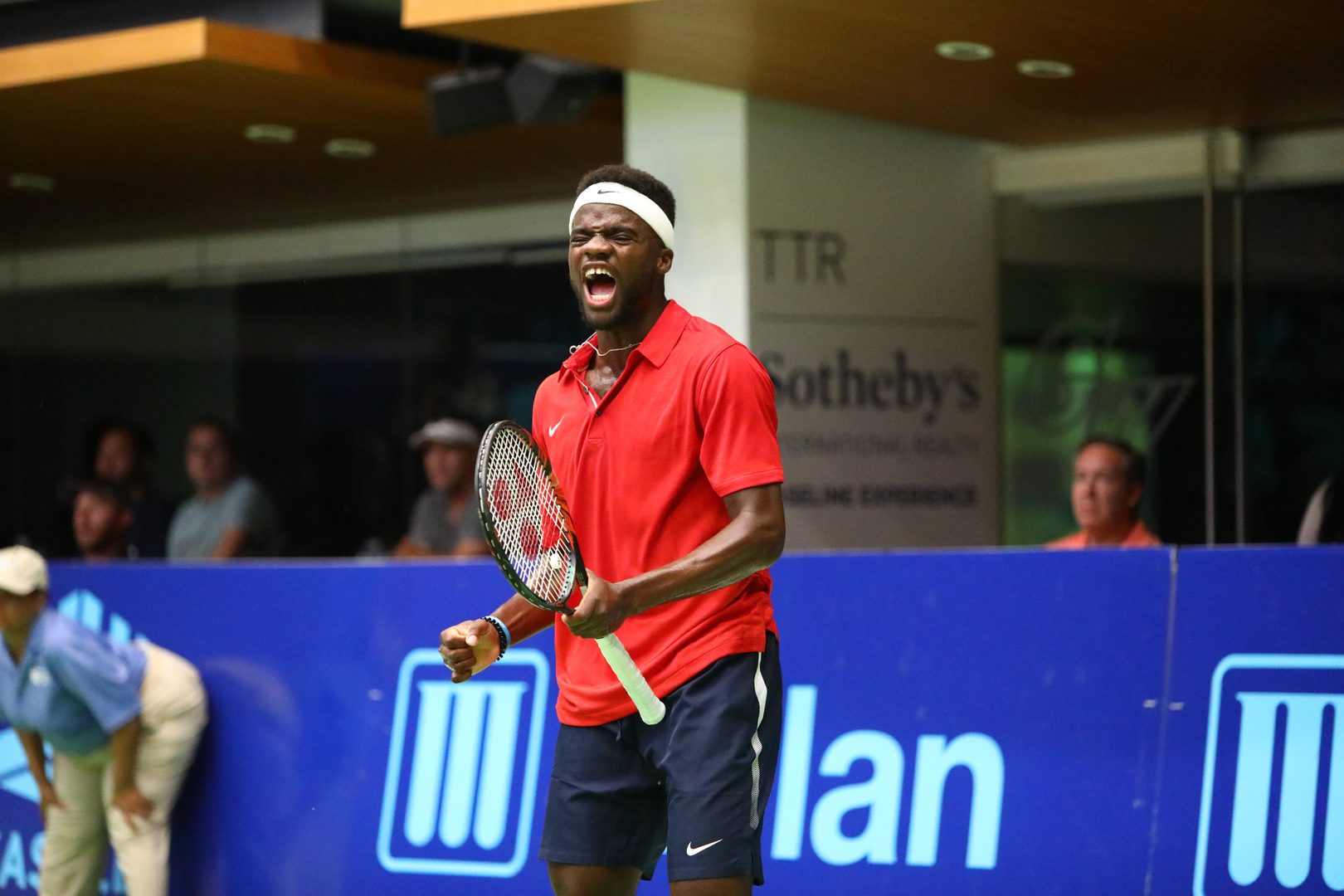 Last night, DC phenom and Kastles all-star Frances Tiafoe slapped his flexed bicep and nodded to the packed crowd inside Margaret Court Arena to signal his newfound strength. The gesture came after he upset world #5 and former Kastle and current Freedoms superstar Kevin Anderson in the second round of the Australian Open, 4-6, 6-4, 6-4, 7-5, to arguably score the biggest win of his career.

“It’s probably the best win of my career, yeah,” said Tiafoe after the match.

If it wasn’t the biggest win of his career, it certainly was the scariest for the top players in the game.

Tiafoe has improved a lot since he turned pro in 2015. The College Park native won his first ATP Tour title at the Delray Beach Open last February and qualified for the Next Gen Finals last November and is currently the #39th ranked player in the world. But this was Tiafoe’s first win over a top-10 player at a Grand Slam…and he is only 20 years old!

Anderson led their career head-to-head 3-0 going into the match and early on looked as though he might cruise to a fourth win over the Kastle, as the world #5 took the first set and shot off to a 3-0 lead in the second. But while the scoreboard was lopsided against him, Tiafoe’s experience facing the best players in the world over the last two years prepared him well for a sensational comeback.

Inexperience and nerves may have cost him the five-set loss to 20-time Grand Slam champion Roger Federer at the 2017 US Open or his third-round loss to Karen Khachanov last summer at Wimbledon, but against Anderson the timing was right for a breakthrough.

“I’ve been in those situations quite a lot,” acknowledged Tiafoe. “I’m starting to feel more comfortable finishing the match, not just playing a match.”

The first of two critical turning points came in the second set. Serving down 0-3, Tiafoe held to keep alive in the set. Then in the very next game, he fearlessly attacked Anderson’s two biggest weapons, his serve and forehand, and scored his first break of the match. Tiafoe backed that game up with another strong hold to assert his serve and forehand dominance, which changed the dynamic of the match.

The second and almost as pivotal turning point came at 4-all. Tiafoe kept his nerve facing Anderson’s lethal serve. He forced the world #5 to deuce, after missing two opportunities to break, and continued to pile on the pressure by maintaining the advantage. When Anderson finally faltered on a first serve, Tiafoe seized his first look at a second serve and forced an error to consolidate the break. The Kastle then held at love in the next game to even the match at a set a piece.

Though the next two sets remained tight, the momentum clearly shifted in Tiafoe’s favor. He continued to pressure the Anderson serve and outmaneuvered the 6’8″ giant the remainder of the match. Tiafoe clinched an early break in the third game of the third set and the fatal break late in the fourth set for a 6-5 lead.

Anderson gave everything he had in the final game. The South African earned two break chances to extend the match. But staring down Anderson at 15-40, Tiafoe hit an unreturnable serve and fired unshakable groundstrokes to win the next point and forced the game to deuce. From there, it took just four more swings of his racquet for Tiafoe to seal the win with a volley winner on the baseline.

“It means the world to me,” said Tiafoe. “I lost to Kevin three times last year, and down a set and a break it looked like he was going to get it for the fourth time. But I just went to a different place. I dug insanely deep. These are the matches where they kind of define you, and help you feel more and more comfortable to keep winning matches like that.”

Next up, Tiafoe will face world #35 Andreas Seppi of Italy on the eve of his birthday. (Tiafoe turns 21 on January 20.) The two have never played before, but it should be a very close contest. The Italian is also playing very well. He reached the final of Sydney International and upset #31 seed Steve Johnson (New York Empire) in the first round, 6-4, 4-6, 6-4, 6-3.

“It’s all about competing,” said Tiafoe about the matchup. “These guys are insanely good. It’s how bad do you really want it, and I want it real bad.”

For the most current match schedule go to AusOpen.com