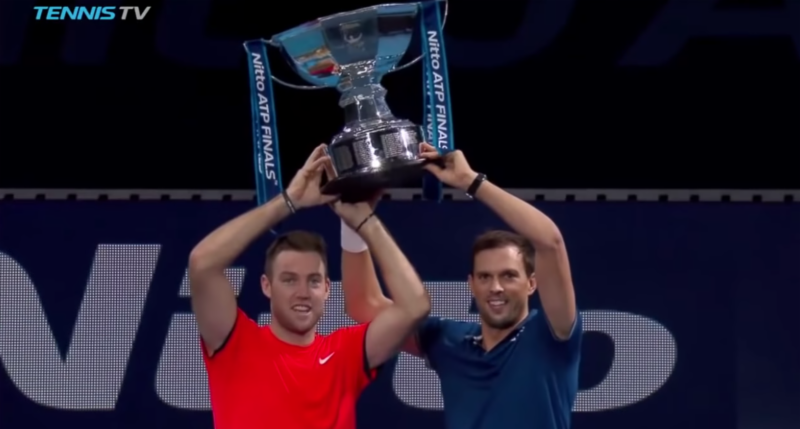 Kastles doubles superstar Mike Bryan had a historic season on tour this year. On July 16, at the age of 40, he became the oldest doubles or singles #1 in history. In September, he broke the all-time doubles Grand Slam record by winning his 18th major title at the US Open. And this past weekend, he capped off 2018 by winning the Nitto ATP Finals in London with WTT rival Jack Sock (Springfield Lasers) to claim his fifth year-end championship title. The duo defeated French doubles stars Pierre-Hugues Herbert and Nicolas Mahut, 5-7, 6-1, 13-11, in an epic match that is sure to be a classic.

“To win here is just an epic experience,” said Bryan afterwards. “To finish a great year off the right way, winning here, against some of the best teams in the world, the way we did, it went down to the wire. It was pretty exciting.”

It was the fifth title of the season for Bryan and his third with Sock. The WTT rivals first paired up in June at the Fever-Tree Championships in London, after Mike’s lifetime doubles partner and twin brother Bob Bryan suffered a hip injury during the final of the Mutua Madrid Open, which sidelined him for the rest of the season. Mike and Jack went on to win Wimbledon and the US Open, becoming the first American duo to win those titles back-to-back since Jonas Bjorkman and Todd Woodbridge in 2003.

“We started off with a great moment in London, winning Wimbledon,” said Mike after their  semi-final win over former Kastle Bruno Soares and former doubles world #1 Jamie Murray. “If we could finish it off strong in London again, winning ‘the fifth slam’ then that would be pretty special.”

Seeded #5, Mike and Jack got off to a strong start in early round-robin competition. They scored decisive wins over #3 seeds Lukasz Kubot and Marcelo Melo, 6-3, 7-6(5), and #1 seeds Mate Pavic and Oliver Marach, 6-4, 7-6(4). The pair suffered a setback in their final round-robin match, falling to their ultimate opponents in the final, Herbert and Mahut, 6-2, 6-2. But a defiant win over Soares and hometown favorite Jamie Murray, 6-3, 4-6, 10-4, renewed their confidence when facing the Frenchmen the second time around. Herbert and Mahut certainly faced a stiffer resolve from the Americans in the final.

After dropping the first set, Mike and Jack ran away with the second early, scoring two service breaks to secure the set and even the match. The Americans continued their momentum and looked unbeatable in the deciding tiebreak. They held four match points at 9-5. But Herbert and Mahut produced a stellar caliber of tennis in the final moments of the match. They fought back to 9-all and saved another match point at 9-10, and even earned a match point of their own at 11-10. But rock-solid netplay from Mike denied the Frenchmen the title and in the next two heart-stopping points, Mike and Jack secured victory.

All in, Mike and Jack ended 2018 with an impressive 20-6 record and were crowned ATPWorldTour.com ‘Fan Favourites’ at the 2018 ATP World Tour Awards. They were also among the first teams to qualify for the Finals in London. But their partnership appears to have run its course. Bob recently announced he will be taking back the deuce court and reuniting with Mike this January. The next time Mike and Jack meet on court, they will likely be rivals, but also friends.

“[I have had] unreal memories with Jack this year,” said Mike during the trophy presentation in London. “We’re kind of closing the book on our partnership because Bob is coming back. But we’re always going to be great friends and hang out in the off-season. We’re going to spend the off-season together training.”

“For me, this is special,” said Jack, before hoisting the champions trophy. “Big thanks to Mike for the phone call earlier this year to play. Honestly, all these moments are for Bob. I’ve known these guys for a long time, we are very good friends. I know he has been watching everything…This is for you Bob, I hope you are watching and I’ll see you guys in the off-season.”