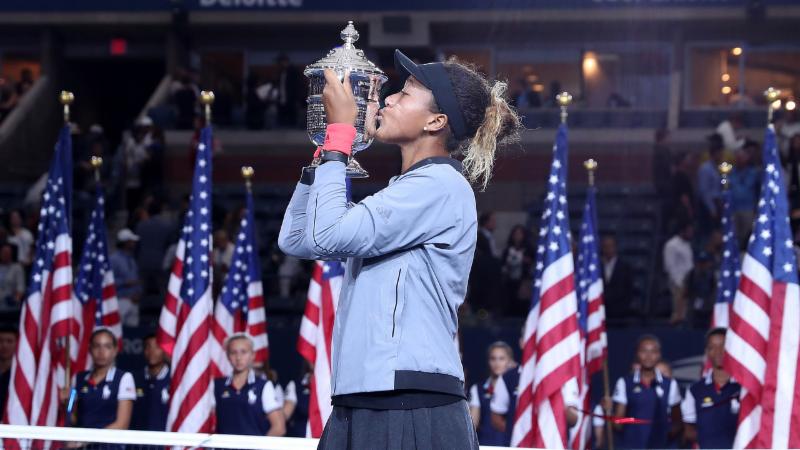 On Saturday, July 28, 2018, Washington sports fans got an up-close look at future Grand Slam champion Naomi Osaka at Kastles Stadium. On Tuesday, July 8, 2008, fans got to see tennis legend Serena Williams play the first Kastles home match ever. Last night, these two tennis champions squared-off in front of a sold-out crowd in Arthur Ashe Stadium in New York and an international television audience of millions in a battle of Kastles stars past and present.

In a breathtaking performance, 20-year-old #20 seed Naomi Osaka upset 23-time Grand Slam champion and six time US Open champion Serena Williams, perhaps the greatest champion in women’s sports history, in straight sets, 6-2, 6-4, to win the 2018 US Open Women’s Singles Championship. In doing so, Osaka became the first Japanese male or female to claim a Grand Slam title in history. After the match, Osaka acknowledged it was a surreal experience.

“For me, I never thought that I was beating her,” said Osaka. “In my mind, I always think she’s going to come back from this. Because I’ve watched so many matches where she comes back from a really hard position, so I never tried to put my foot off the gas, I just kept thinking next point, next point, next point then before I knew it, it was over.”

How big is Naomi in Japan? Click here to read about how social media reacted to Osaka’s triumph.

Of course, Kastles fans were already familiar with Naomi’s game. The team took notice of her a long time ago and signed her this spring. Then she blew through an A-list of tennis champions, including Maria Sharapova, Agnieszka Radwanska, Karolina Pliskova, Simona Halep, and Daria Kasatkina, to win Indian Wells, and defeated Serena the first time a week later at the Miami Open.

But to defeat Serena Williams in New York on the biggest tennis stage in the world was shocking even for Kastles fans. Serena is, after all, Kastles royalty. She played a total of three season for Washington and was part of the 2009 and 2011 WTT champion teams.

“She really wanted to have the 24th Grand Slam, right? Everyone knows this. It’s on the commercials, it’s everywhere,” said Osaka, referring to the ubiquitous Serena Williams, her childhood hero.

But when Osaka set foot on Arthur Ashe stadium last night, she buried those thoughts and memories, along with the tennis legend. Osaka finished Williams off with 16 winners and 14 unforced errors, landing 73% of her first serves in and dropping just 11 of 42 points on her serve. Williams, on the other hand, had as many winners (21) as errors, and never really found her rhythm on her serve. She put only 55% of her first serves in play and committed six double faults, including one in each of her first four games. Osaka took full advantage and was unflinching through the final point of the match.

Click here for an in-depth analysis of the match at USOpen.org

“When I step onto the court, I feel like a different person,” said Osaka. “I’m not a Serena fan. I’m just a tennis player playing another tennis player.”

After her monumental win in New York, the Kastles superstar will break the WTA’s top-10 rankings, rising to a career-high singles ranking of #7 in the world.

But as tennis commentator Richard Osborn pointed out, “we can no longer call her a ‘rising star.’ At 20, Naomi Osaka has already risen.”