Kastles Down Aviators, 19-18, in Miraculous Comeback 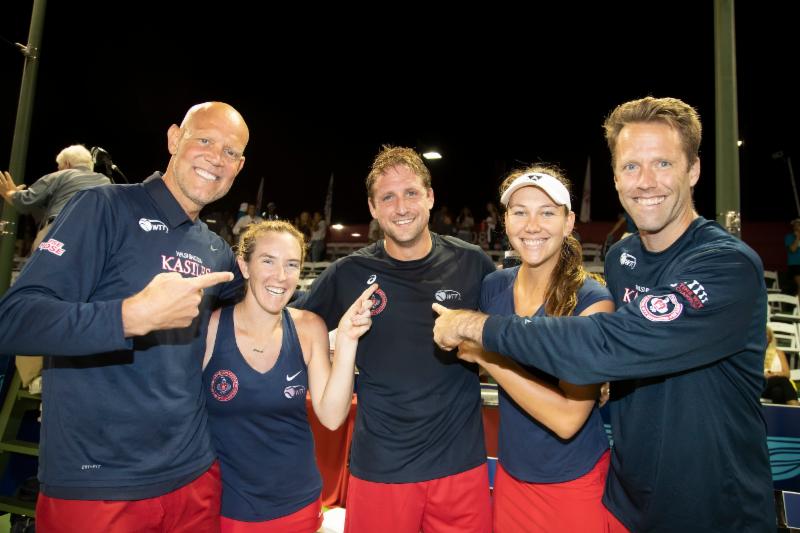 Every World TeamTennis season is filled with nail biting close matches and dramatic turn of events but last night’s Kastles match in San Diego will go down in the annals of Kastles history as possibly the most memorable and miraculous comeback in the team’s 11 year history.

With the Kastles season on the line and on the absolute brink of playoff elimination last night, trailing four games going into the final set to the second place San Diego Aviators on their home court in Carlsbad, California, Kastles all-star Tennys Sandgren saved the season by sweeping five games in a row and the set 5-0 over Marcus Willis, the league leader in men’s singles, to clinch the comeback win, 19-18, and keep Washington’s hopes for the second spot in Sunday’s WTT Finals alive.

The feat was no small miracle. The Kastles suffered a string of setbacks throughout the match that nearly handed San Diego the win. The Kastles lost 3 of 5 sets, beginning with mixed doubles.

For most of the season, Nicole Melichar and Robert Lindstedt have been invincible together. Lindstedt is the league leader in mixed doubles and Melichar is not far behind him. The pair arrived in Carlsbad riding a six-game winning streak, but against Anna-Lena Groenefeld and Marcin Matkowski, the streak came to an end.

Routine service holds by all four players started the set even at 2-2, and after Matkowski held easily to go up 3-2, it appeared as if the trend would continue. But in Lindstedt’s next service game, the Kastles unexpectedly faced two breakpoints at 2-3. Though Lindstedt ultimately saved the game to even the score at 3-3, he would continue to struggle on serve as the set progressed.

The Kastles had an opportunity to serve out the set on Melichar’s serve, after they broke Groenefeld to go up 4-3, but further serving trouble plagued Washington in this first set. A double-fault opened the game and led to a loss of the next three points in a row to hand the break back to San Diego and send the set into a tiebreaker.

The Kastles serving woes continued from there. After Matkowski won both of his service points, Lindstedt hit a double-fault to split his. The Kastles then took a point off Groenefeld’s serve, down 1-3, on Lindstedt’s return, followed by a Melichar missed return in the net, giving the Aviators three set points at 4-2. It was now up to Melichar to keep the set alive, which was entirely possible. Melichar has one of the biggest serves in women’s doubles and has consistently delivered this season under similar conditions. But on this occasion, her serve abandoned her. Melichar double-faulted to give San Diego the set and early lead, 5-4(2).

The Kastles difficulties continued at the start of the next set, when Kastles all-star Madison Brengle took on Naomi Broadyin women’s singles. Broady is one of the hardest-hitting players in the league. She defeated Brengle in their first meeting, 5-1, and nearly beat Venus Williams the last time the teams met a week ago in DC. Again, in San Diego, Broady was just as tough.

The 6-foot-2-inch, English powerhouse broke Brengle in the first game of the set and continued to run up the scoreboard with a hold and another break of serve to take a quick 3-0 lead. It looked like the Aviators may run away with the set and the overall match, but in the fourth game Brengle halted the Aviators’ momentum. Taking advantage of a string of unforced errors, she won eight points in a row, breaking Broady and holding at love to keep the set in play for Washington, 2-3. Though Broady began to miss with more frequency, she refused to slow the pace of her shots down. She continued to blast away at Brengle, clocking two aces upwards of 110 MPH and a combo of ruthless groundstrokes to hold the lead at 4-2.

But Brengle persisted to keep the pressure on Broady in her next service game and managed to claw out an additional critical game to keep the overall team score close. The Dover, Delaware native pushed the Aviator to keep the ball in play, rally after rally. The tactic enabled Brengle to hold and force Broady to serve out the set. As well as Brengle played, Broady was up to the task. She earned her first set point with an ace and hit another blistering serve to secure the set, 5-3, and extend the Aviators’ lead to 10-7.

The Kastles had a breakthrough in the third set.

If Lindstedt had serving troubles at the start of the match, you wouldn’t have known it when he teamed up with Tennys Sandgren in men’s doubles. The pair were rock solid against Matkowski and Marcus Willis, who have been a very formidable team this season.

The set started with all four players holding serve to tie the score at 2-2. The turning point occurred in the the fifth game, when the Kastles broke Willis to go up 3-2. In the very next game, Sandgren was tested on his serve. Up 3-1, Lindstedt missed an easy smash at net and Sandgren double-faulted to bring on a deciding point. Determined to win the game, Sandgren saved the break with a massive serve out wide to take a 4-2 lead, and get an early mental edge over Willis.

Matkowski then held at love in the next game to shrink the lead, but Lindstedt followed and served out the set with an unreturnable let serve and won 5-3. The match was now a game within reach for Washington at halftime, 12-13.

As promising as the third set was, the fourth set nearly cost the Kastles the match. In this set, Melichar and Brengle paired up against Broady and Groenefeld in women’s doubles and actually had a golden opportunity to pull ahead early. After Brengle held to go up 2-1 and tie the overall match score at 14-14, the Kastles earned four breakpoints on a shaky service game from Groenefeld. But with an 0-3 advantage, Melichar and Brengle inexplicitly chose to hit their next three returns directly at Broady at net, which backfired, as Broady put each return away with a single volley winner to force a deciding point. Though Melichar hit her deciding point return crosscourt, the momentum slipped away from the Kastles and Broady put away yet another point at net to hold for a 2-2 set, instead of a 3-1 lead for the Kastles.

The Aviators built on the momentum by breaking Melichar and then saved two more break points on Broady’s serve after falling behind 0-2 to start the game. Now up 4-2 and very confident, the Aviators outplayed the Kastles on Brengle’s serve. They scored the set on another deciding point to take it, 5-2, and give San Diego a seemingly insurmountable 18-14 lead heading into the last event of the night, men’s singles, where the scores are usually close.

Tennys Sandgren has had a shaky season in men’s singles in his first year as a Kastle. He arrived in San Diego with a 16-28 losing game record. But if ever there was a time and place for Sandgren to deliver, it was last night in San Diego against Marcus Willis. Willis is a dangerous opponent. He beat Sandgren in DC last week comfortably, 5-3, and sits atop the men’s singles rankings this WTT season. But with the stakes at their highest last night, Sandgren was a completely different player, the one who reached the Australian Open quarterfinals, upsetting top-10 players Stan Wawrinka and Dominic Thiem.

In a set that both players knew would determine the fate of their teams’ playoff chances, Sandgren comprehensively dismantled Willis in front of his hometown crowd winning 20 of 26 points and every point on his serve in a set that incredibly lasted only 12 minutes.

Trailing by four games in the overall score, Sandgren broke Willis in the very first game dominating in every respect. After quickly holding his serve, the Kastles singles star immediately broke Willis again for a 3-0 lead as the Aviators’ player, bench and all the fans in their stadium looked stunned as they saw that their seemingly locked up chance to clinch a third straight trip to the WTT Finals was slipping away.

None of Willis’ usual tactics of tricky slices, clever shot placement and aggressive approaches to net were working on this night as Sandgren ran down every ball and, once there, overpowered and outmaneuvered the Aviators player at every turn. Sandgren easily held to go up 4-0 and tie the overall score at 18-18. Breaks in WTT men’s singles sets are fairly rare, but a third break by Sandgren in the fifth game now seemed inevitable as Willis seemed lost and Sandgren looked invincible.

Sandgren racked up a quick 3-1 lead on Willis’ serve. Down four match points, Willis took the opportunity to come to net sending an inside-out backhand volley on a sharp angle for Sandgren to chase down right in front of the Kastles bench. Sandgren got to it and blasted a forehand down the line that Willis was barely able to get a racquet on as Sandgren sailed straight into his teammates’ arms to celebrate an epic 5-0 victory and their continued chance at the Finals.

With last night’s miraculous win, the Kastles season now comes down to tonight’s last match against the Ocean County Breakers in Newport Beach, California in a do-or-die match for the remaining spot in the WTT Finals. If the Kastles take down the Breakers, who were eliminated last night, and San Diego Aviators defeat the Lasers at home in a match that both teams need to win to stay in playoff contention, the Kastles will travel to Philadelphia to face the Freedoms on Sunday at 2 PM for a shot at a record-breaking seventh WTT title!

With the 2018 season on the line, watch tonight’s match live on WTT.TV or on the World TeamTennis YouTube channel at 9 PM EST and cheer on your Kastles as they fight for a chance to make more World TeamTennis history!