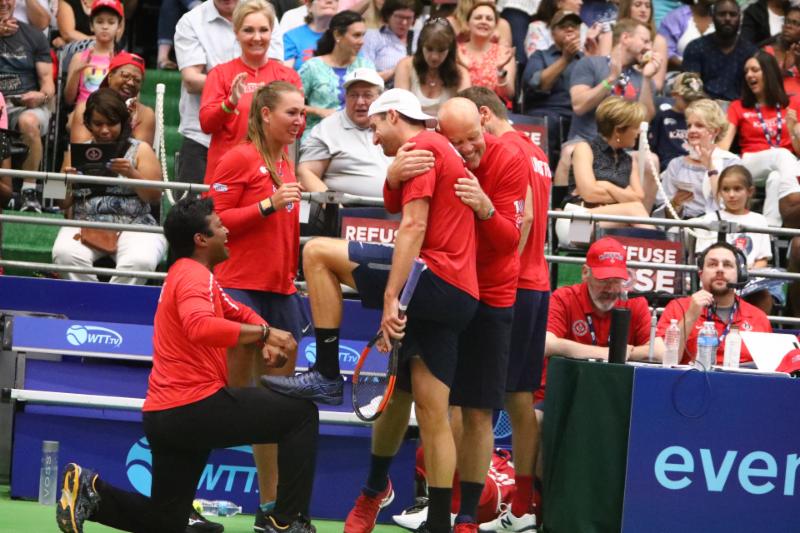 The Kastles fell just short on Saturday night in extended play against the 1st place Philadelphia Freedoms. The defeat, 23-19, clinched the Freedoms the top record and home court advantage in the WTT Finals. With the loss, the Kastles drop to a 6-4 record, just a half game behind the San Diego Aviators for the second spot in the Finals.

The match was close from start to finish. The Kastles won two out of five sets and lost one set in a tiebreaker. But the Kastles’ newcomer and World #17 Naomi Osaka, came up short against Taylor Townsend after tweaking her calf early in her WTT debut, which made the margin for victory much tighter than expected.

The Kastles got off to a good start with men’s singles. Tennessee All-American Tennys Sandgren scored some revenge against the Freedoms’ Kevin King. King won their previous set in Chicago the night before, but in DC it was a different story.

Sandgren was on from the first ball to the last. Both players held without much trouble to open the match, but Sandgren’s serve was rock-solid last night. Sandgren played his best set with the Kastles thus far and he did it without dropping a single point on his serve. King held serve at the start, but Sandgren was garnering more points on each of King’s service games.

After Sandgren’s fourth service game that he held at love, he was up 4-3 and on a roll. The Kastle took the first point of King’s last service game with a backhand down the line, but King didn’t back down acing him twice and striking a winner deep into the court. Now down 3-1, Sandgren returned King’s serve right at him. King was unprepared, lost the point and his lead in the game shrunk to 3-2. Sandgren took the next point after a long rally with King at the net; King pushed Sandgren all over the court before dropping a short ball which Sandgren nailed right at him. The score was now 3-3. King was so rattled by the winner that he double faulted and gave Sandgren the set at 5-3.

Next up, the Kastles’ newest addition, world #17 Naomi Osaka took center stage in her WTT debut. At the age of 20, she already has a WTA Premier title to her name, winning the 2018 Indian Wells singles championship, and has scored wins over the best players in the world, including Maria Sharapova, Simona Halep, and Serena Williams. But in her first match as a Kastle, Osaka was forced to play the toughest opponent in WTT this year, Taylor Townsend, who hasn’t dropped a singles set this season.

Townsend tested Osaka early. After an easy hold in the first game, Townsend earned three breakpoints on Osaka’s serve. But in champion style, the Kastle saved them all. Osaka won the first two with a service winner and a 121mph ace out of Townsend’s reach and then closed out the game by pounding backhands to the lefty’s forehand which eventually led to an error for the hold.

Osaka kept the momentum and broke Townsend in her next service game to take a 2-1 advantage in the set. Unphased, Townsend rebounded by breaking right back. After facing stiff resistance off the ground from Osaka in her next service game, Townsend dug in on a crucial 3-2 point and held serve to take the lead in the set, 3-2. Something was clearly wrong with Osaka during this game and she called a medical timeout as soon as it was over.

Osaka’s movement improved when she returned to the court to serve. As the length of the rallies and the competitive nature of the match increased, Osaka sharpened her aim and held to tie the score, 3-3. But Townsend was determined to not let her streak end in DC. She held comfortably in the next game to move a game away from the set, 4-3, and continued to apply pressure in Osaka’s next service game. She earned two set points at 2-3, but Osaka saved them both by hitting two of her strongest serves of the night to force a tiebreaker.

The tension continued through the first four points of the tiebreaker. Both players split their service points to keep the set even. But at 2-2, Townsend won both her service points with a mix of power-hitting and slices to surge ahead, 4-2, and earn three set points. Then on Osaka’s next service point, Townsend blasted a powerful return that drew an error and captured the second set, 5-4, proving why she is the league leader in women’s singles.

The Kastles were still leading 9-8 as Sandgren and Robert Lindstedt took the court in a men’s doubles rematch against King and Fabrice Martin. The Freedoms defeated the Kastles in this set the previous night in Chicago 5-4(4). In Friday’s match, the Kastles had two set points on Lindstedt’s serve at 4-3 in the tiebreaker, but clutch returning and volleying from Martin and King denied Washington the win. The Kastles duo was determined to reverse that result last night.

The match in Washington started routinely, both teams held confidently to open the set, 1-1. But serving up 2-1 in the next game, both Lindstedt and Sandgren made errors in consecutive points that give Philly two break points. And at 2-3, Martin unloaded a devastating return that forced Washington to pop up a soft ball down the middle of the court. The Freedoms smashed it to score an early break. They then held to consolidate the score, 3-1, and take the lead for the first time in the match, 11-10.

Sandgren tried to disrupt King and Martin’s rhythm on his next service game, but the Freedoms were dialed in. They continued to hit crisp returns and cover the net. Sandgren found an opening at 2-all and hit a 107 mph serve, followed by a down the line winner past Martin. An unreturnable 127 mph serve followed and held off the break. But the Freedoms were still up 3-2. Sandgren continued to swing hard in Martin’s next service game and was able to earn two points to get a look at a 3-2 serve from Martin. But the Freedom shut down the Kastles with an ace to maintain the set lead, 4-2.

After taking a 3-1 lead on Lindstedt’s serve, the Kastles committed back-to-back errors and a stressful deciding point followed. A clutch first serve from Lindstedt bailed them out of trouble, but the Kastles still trailed 3-4. The Kastles put in a solid effort to get to 2-all on King’s serve, but two first serves and two overhead smashes from Martin gave them the set, 5-3. Philly now had a one point lead going into halftime, 13-12.

The women’s doubles set followed. It was a tug of war as Kastles all-stars Madison Brengle and Nicole Melichar traded service holds with the Freedoms’ Townsend and Raquel Atawo. The Kastles had a chance to tie the overall match score at 2-2 on Townsend’s serve. At 2-all in the game, Brengle and Melichar won the most exhilarating point of the match. In the 20 point rally, the Kastles were sent far and wide. Both Kastles blasted forehands and backhands and made amazing gets, being dragged to a single side of the court, and powering through to keep the ball in play until Townsend sent the volley long to earn two breakpoints. But the Freedoms saved the first with a skillful volley from Atawo and the second with a second serve on the deciding point, to maintain a two game lead.

The Freedoms then broke the holding cycle in Melichar’s next service game. After dropping the first three points, Brengle and Melichar clawed their way back to 2-3. But Melichar double-faulted in the next point, giving Townsend and Atawo a 4-2 lead in the set and a three game lead overall. Atawo then followed up the break with a strong hold to take the set, 5-2, and boost the Freedoms ahead 18-14 going into the final set.

The Kastles saved their best team for last. Lindstedt and Melichar are the league leaders in mixed doubles, and they looked it against Townsend and Martin, who are in second place. The set began routinely enough with three service holds. But in the fourth game on Townsend’s serve, the Kastles got a good chance to score a valuable break. Lindstedt and Melichar stormed off to a 3-1 lead on Townsend’s serve, earning three critical opportunities at break points. But the Freedoms didn’t let up. Townsend hit a huge serve that went unreturned by Lindstedt and then nailed a volley straight at Melichar’s toes that she couldn’t return. Townsend closed out the game and the Kastles opportunity with another big serve that Melichar could not return. The Freedoms now tied the score at 2-2.

Philadelphia flipped the script in the next game. Facing breakpoints on Lindstedt’s serve, the Kastles teamed up to save the game and take a 3-2 lead in the set. Holds from Martin and Melichar put the pressure back on Townsend to serve to stay in the set. Down 3-4, Townsend was up to the task. She held, dropping just two points to force a fifth set tiebreaker. Lindstedt won his first two serve points, then scored a mini-break on Martin with a smash at Townsend to take a 3-1 lead in the decider.

The Freedoms came back on Melichar’s serve at 2-3, but the Wimbledon mixed doubles champ earned the Kastles’ first set point with a big serve to Townsend, 4-2. Towndsend saved the first off Lindstedt’s return. But the Kastles had two more set points remaining. Returning up 4-3, Melichar missed her return wide. But on the 4-4 deciding point that would either close out the match for Philadelphia or keep the Kastles in the match, Melichar stepped up with an attacking return off Townsend’s serve followed by a forehand winner to take the tiebreak and the fifth set, 5-4.

Lindstedt and Melichar’s set win meant that they would go into extended play, giving the Kastles, who were down 22-19, another chance to take the match. But the Freedoms had a big advantage with the big hitting 6 foot 6 inch Martin serving first. The Freedoms never gave the Kastles an opportunity for a comeback, allowing the Kastles only a single point from a Lindstedt backhand winner down the line. By winning the game, the Freedoms secured the match 23-19, along with their first place ranking and home court advantage in the WTT Finals. The Kastles fell to one half game out of the race for the second spot behind the San Diego Aviators with three matches left.