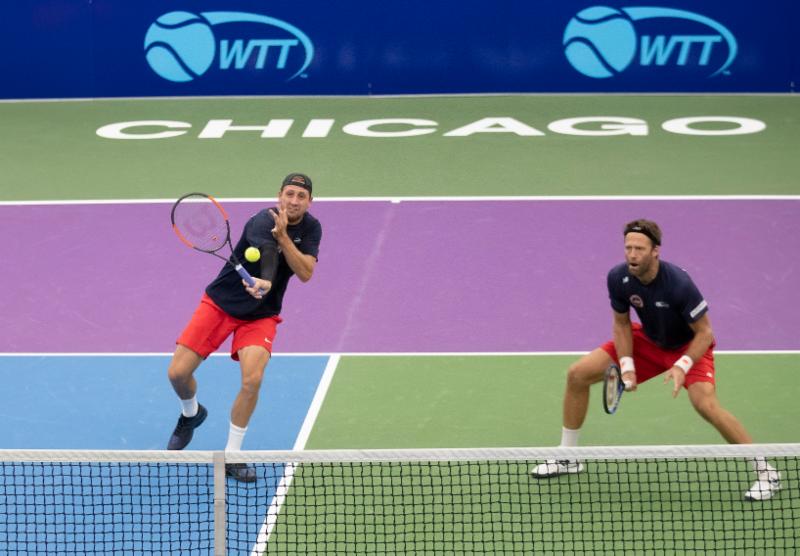 In front of a sold out crowd at the XS Tennis Village in South Side, Chicago, and an international television audience last night, Kastles all-star Madison Brengle put on a dazzling show of shotmaking and saved five set points including coming back from 0-4 in the deciding tiebreaker to defeat reigning US Open champion and French Open finalist Sloane Stephens, 5-4(4) and put the 1st place Philadelphia Freedoms on notice.

The win came in the fourth set of a highly competitive match between the top two teams in World TeamTennis this season: the Freedoms and the Kastles. Brengle’s stunning comeback reduced the Kastles’ trailing deficit to just three games. But in World Team Tennis, the difference between winning and losing is often just a few points in the match, and Washington was unable to capitalize on Brengle’s memorable win and, in the end, couldn’t overcome an early deficit created from an extraordinary number of missed opportunities as the Freedoms defeated the Kastles, 23-18.

Though the match was hosted in Chicago, it was technically a Freedoms home match, giving Philly the order of play advantage. And while the Freedoms had world #3 Sloane Stephens in the lineup for the match, they decided to begin the evening with mixed doubles, pitting Chicago native Taylor Townsend and world #58 Fabrice Martin against Wimbledon mixed doubles champion Nicole Melichar and 2014 Australian Open champ and three-time Wimbledon doubles finalist Robert Lindstedt. This opening set was a seesaw battle that included two late set breaks of serve and culminated with a tiebreaker that Melichar and Lindstedt secured, 5-4(2), to score their fourth mixed doubles win in a row.

Reigning US Open champion and 2018 French Open finalist Sloane Stephens stepped into action next, pairing with Townsend in women’s doubles against Madison Brengle and Melichar. The Kastles jumped to a quick 3-0 lead in the first game on Melichar’s serve, but the Freedoms swept the next four points to break serve. The Kastles seemingly put that behind them in the next game on Stephens serve as they again took a 3-0 lead but somehow again lost four straight game points to fall behind 0-2. Losing those eight game points was a huge shift in momentum and the four game swing in the overall team score would prove to be very costly for the Kastles before the night was over.

The Freedoms used their momentum to jump to a 4-0 set lead before the Kastles won a game on Melichar’s serve and then got to two more break points on Stephens serve at 2-3. The Freedoms managed to save those break points as Townsend continued to dominate the net to capture the set 5-1 and catapult the Freedoms to a 9-6 overall lead. The margins in World Team Tennis are small and the Kastles would be left thinking all night about the ten game points squandered in this set.

In the next set, Lindstedt and Tennessee All-American Tennys Sandgren tried to regain some of the momentum and chip away at the lead as they took on Martin and Georgia Tech All-American Kevin King in men’s doubles. This set led to an extremely close tiebreaker. The Kastles had two set points at 4-3 on Lindstedt’s serve in the tiebreaker, but clutch returning and volleying from Martin and King secured the set for the Freedoms 5-4(4) and the crucial two game swing in the match extended their lead to 14-10 at halftime.

When world #3 Sloane Stephens returned for the fourth set to play women’s singles, Freedoms fans looked for their hometown star to run away with the match. But Stephens encountered Brengle at her finest last night. The Kastles all-star fed off the electric energy of the crowd and chased down every ball creating some of the best rallies and points ever seen in WTT this season.

A series of breaks between both players led to yet another tiebreaker, and a combination of power baseline rallies propelled Stephens to a 4-0 lead in the breaker, earning the Freedoms five set points. But in classic form Brengle refused to give up. The Dover, Delaware native pulled off a miracle lob with a Stephens overhead right at her in the midcourt to save the first. Brengle continued to stay in each point, retrieving balls from side to side and blasting backhands whenever she had the chance to force a string of forehand errors by Stephens gave Brengle an opening to take the set on the deciding point. The Kastle played another gutsy rally to take the set, 5-4(4). Stephens and the packed Chicago crowd were stunned by the turn of events.

The win kept the Kastles’ hopes alive, and put them just three games behind the Freedoms, 18-15, heading into the final set.

CLICK TO WATCH: Brengle takes it to world #3 Sloane Stephens.

The fifth set was an All-American singles battle between Sandgren and King, who has been an effective closer for Philly this season. Both men went toe-to-toe with big serves and groundstrokes to close out the evening. Sandgren went in with confidence that he could win the set and the match for the Kastles, and it looked like he might. He had a golden opportunity to break early in the final set to swing the momentum towards the Kastles, but King was able to blast a serve at Sandgren to win the 3-all point. King broke Sandgren in the last game of the set after a controversial line call with the game tied at 1-1 that defeated the Kastles comeback chances as King captured the final set, 5-3 and the overall win for the team, 23-18.

Sandgren will get a chance to play King again tonight, when the Kastles host the Freedoms in DC in the Kastles’ last home match of the regular season.