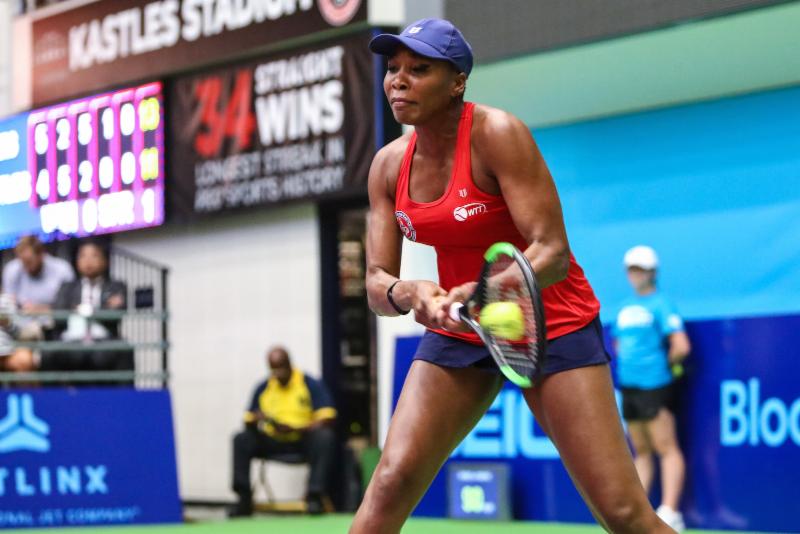 The Springfield Lasers are one of the Washington Kastles most historic rivals. Of Washington’s six championship titles, half were won against Springfield. The team knows how to assemble a winning roster and, last night, reminded fans inside Kastles Stadium just how dangerous they can be. In Venus Williams’ final match of the season, the Kastles suffered a bit of a let down after an epic victory decided on the last point the night before as the Lasers won four of five sets to top the Kastles, 22-15.

It was the first match between the two teams this season. Despite the loss, Washington remains in second place in the WTT league standings with a 6-3 winning record. The Lasers, meanwhile, are tied with the Orange County Breakers for fourth place with a 4-5 record. The race for the two spots in the WTT Finals is heating up!

The Kastles got off to a competitive start last night. In men’s doubles, 2014 Australian Open champ Robert Lindstedt and Australian Open quarterfinalist Tennys Sandgren played Olympic gold medalist and 12-time Grand Slam champion Daniel Nestor and former junior world #1 Miomir Kecmanovic. Both teams held serve the first four games without much trouble. On Nester’s serve in the fourth, the Kastles managed to earn a 3-all point, after Nestor double-faulted. But the Kastles were unable to capitalize. Sandgren netted his backhand pass to tie the score, 2-2, instead of a 3-1 lead for Washington.

The holds continued through another serve cycle with Nestor holding last to tie the score, 4-4, and capture the early momentum heading into the tiebreak. But the Kastles pulled it back quickly. After splitting Sandgren’s opening two service points, the Kastles scored the next two points on Kecmanovic’s serve to go up, 3-1. Then on Lindstedt’s serve, Sandgren hit a backhand volley drop shot winner to earn four set points. But serving up 4-1 with the set on his racquet, Lindstedt uncharacteristically  double-faulted. It handed the three remaining serves of the tiebreak to Nestor, who made good use of them by blasting serves at the Kastles, who dropped all three returns. The former doubles world #1 won them all to take the set and a very crucial early swing in momentum, 5-4.

Lindstedt and Nicole Melichar aimed to make up the difference against Nestor and Abigail Spears in mixed doubles. All four players are Grand Slam doubles champions, but Lindstedt and Melichar have recently distanced themselves from the pack. They began the set riding a two game win streak and built on their record last night.

After the men traded service games to open the set, the Kastles broke Spears 0-4 with a forehand winner down the middle to take the early advantage. Then serving up 2-1, Melichar displayed the shots, movement, and big serve that helped her earn her maiden Wimbledon title this summer. Melichar held serve with a 100 mph second serve and the help of Lindstedt at the net to drop only one point to take the lead 3-1, and the set for Washington, 7-6. Two more holds from the men inched the set closer to Washington. Returning up 4-2 on Spears’ serve, Lindstedt and Melichar earned three sets points with a Laser double fault and a pair of down the line return winners. Spears saved the first, but on Melichar’s return in the next point, the Kastles consolidated the set, 5-2, propelling Washington ahead in the overall score, 9-7.

In men’s singles, Tennys Sandgren hoped to build on the lead taking on former junior world #1 Miomir Kecmanovic, who came out of the gates strong. Kecmanovic applied pressure on the Kastle’s serve early and Sandgren faced a breakpoint in his first service game. Serving up 3-2, Kecmanovic caught Sandgren off guard with a sneaky crosscourt dropshot to bring on a break point. The Kastle saved the first deciding point with an explosive kick serve. But after a quick hold from Kecmanovic to even the score, the Laser got ahead again in Sandgren’s next service game and succeeded in breaking him the second time around to go up 2-1.

Sandgren responded by breaking back immediately to tie the set. But in the very next game, Sangren suffered another setback, falling behind 1-3. With three breakpoints to spare, Kecmanovic tore into Sandgren’s next serve and after an extended baseline rally, scored another break of serve with a strong forehand to push the Kastle back paired with a soft dropshot winner to recapture the lead in the set 3-2. Kecmanovic tied the match score, 11-11, on his serve in the next game, then broke Sandgren, 4-0, to take the third set, 5-2, and hand Springfield the lead 12-11 and a lot of momentum at halftime.

The second half of the match featured the return of Kastles superstar Venus Williams. After a commanding performance the previous night against the San Diego Aviators, where she saved four match points to clinch an epic win at 6-all in the Supertiebreaker, it became clear in women’s doubles that the star Kastle suffered a bit of a let down.

Partnering with Melichar, WIlliams faced Spears and Vania King, who have been playing well for Springfield this season. They’re only a few games out of first place in the league standings and didn’t waste time getting to work on the Kastles.

After Spears held serve to open the set, the Lasers charged up 0-3 on Venus’s serve to earn four breakpoints. Venus managed to save the first two with signature shotmaking, but serving down, 2-3, double-faulted to surrender an early break. The Kastles had three chances to break King in the next game, but the Lasers defended all of them. They forced Kastles errors and struck solid volleys between the Kastles to capture the game 4-3, go up 3-0 in the set, and 15-11 in the match.

The Kastles faced more adversity on Melichar’s serve in the next game. Up 3-2, the Lasers smacked a winner that barely caught the baseline, which brought on a deciding point. A missed first serve from Melichar gave King a good look at a second serve to start the point. The Laser attacked aggressively and the team stole another break to go up 4-0.

The Kastles rallied late in the set. Williams and Melichar played a controlled game to break Spears.  Venus served the next game to stay in the set, but the Lasers did not shy away from the WTT champ. They blasted away at Williams and converted their first breakpoint at 2-3 to take the fourth set, 5-1, and extend the Lasers’ lead, 17-12, heading into the last event of the night.

Williams played Lasers all-star Vania King in her last set of the 2018 season. Kastles fans may remember how formidable King was in 2009, when she led the Lasers to the WTT Final. King brought the same intensity to Kastles Stadium last night. She broke Williams in the first game at love to give the Lasers an 18-12 lead. Never one to give up, Williams powered back to break King in the next game. Venus sealed the game by whipping a crosscourt forehand past King at net after an extended rally.

But Williams faced breakpoints again in her next service game.  At 2-3, King ran Venus hard, hitting line-drives from corner to corner, until Williams missed and surrendered another break. A quick hold from King in the next game gave her a 3-1 edge in the set and a 20-13 lead overall. But Williams wasn’t done yet.

Painting lines, the Kastles champ gutted out a critical hold by forcing errors and smashing huge overheads. Williams then broke King in the next game to tie the score at 3-3. But in Venus’s next service game, King bounced back and painted some lines of her own, breaking Williams for the last time and then holding to score the set, 5-3, and match, 22-15, for Springfield.

The Lasers and Kastles have five matches remaining and will face each other again in Springfield on Monday, July 30. Next up, the Kastles play the Freedoms tonight in Chicago.