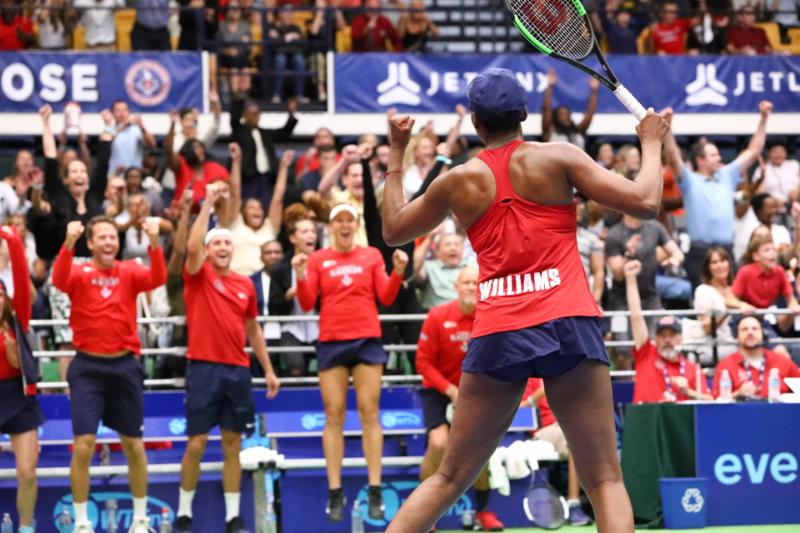 Venus Williams blew the lid off a sold-out Kastles Stadium in her triumphant return to DC last night!  After saving three straight match points (and four overall), the Kastles superstar unloaded her hardest shots of the evening ending with a crosscourt backhand winner to hand the Kastles a thrilling 21-20 victory over the San Diego Aviators on the last and deciding 6-6 point of the Supertiebreaker and the match.

It was a dramatic match with an electric atmosphere from start to finish. The Kastles dropped 3 out of 5 sets and trailed the Aviators virtually the entire match but managed to pull out the victory at the very end. It was a crucial win for Washington, who lost their previous match against San Diego at home, as the Kastles are now in sole possession of the second spot in the WTT standings over San Diego with the playoffs fast approaching.

The Kastles’ Tennys Sandgren got the evening started in men’s singles. The Australian Open quarterfinalist  was looking to score a win in his Kastles Stadium debut. He lost his first singles match in New York this Monday to the Empire’s Mardy Fish and, again, was defeated tonight against the Aviators’ Marcus Willis.

Willis has thrived in league competition this season. He is currently the league leader in men’s singles and doubles, and against Sandgren, showed Kastles fans why. After trading service holds to begin, Willis broke Sandgren in the third game of the set, then held to take an early 3-1 advantage.

Sandgren rebounded by reeling off three quick first serves and winning an extended rally point with a drop shop to score a crucial hold, but Willis stayed focus and held comfortably to move a game away from the first set. Serving down 2-4, Sandgren replied again with a strong hold of serve, hoping to put pressure on Willis, but the league leader didn’t crack. Willis closed out Sandgren in the next game with forceful serving, precise groundstroke placement, and a let serve winner to take the set, 5-3.

Robert Lindstedt and Nicole Melichar followed next in mixed doubles. They faced Anna-Lena Groenefeld and Marcin Matkowski, who are the league leaders in mixed doubles and who upset Melichar and Mike Bryan in the teams’ previous match, but Nicole and Robert were on another level last night.

After routine holds from both teams to open the set, the Kastles got a big break in the third game on Groenefeld’s serve. The Aviators won the first three points quickly, but the Kastles held tough to sweep the next four points to score an early foothold in the set. Melichar then followed with a solid hold to go up 3-1.

After the men traded services games, the pressure fell on Groenefeld to hold to stay alive in the set. Serving down 2-4, Groenefeld fought off three breakpoints to hold and transfer the pressure to Melichar to close out the set.

The Aviators jumped on Melichar’s serve right away, blasting line drives on their first returns. Groenefeld and Matkowski went up 0-2 with this strategy. But then Melichar upped her serve speed and matched the Aviators’ pace off the ground, enabling Lindstedt to overwhelm them at net and take the momentum back in the game. Melichar closed out the set, once and for all, with an ace to win 5-3, and tie the overall match score 8-8.

In the third set, Sandgren and Lindstedt combined to play Willis and Matkowski, who also lead the league in men’s doubles. This was the only set in which the Kastles held a nominal lead all evening. By virtue of serving first and with no service breaks, the Kastles maintained a 1 game lead throughout the set. On serve, in the fourth game, Lindstedt earned two breakpoints on Matkowski’s serve, but the Aviator saved both of them to keep the score tied at 2-2. Those were the only break points of the set, as all players held their serves to force the second tiebreaker of the evening.

The Aviators won the first point of the tiebreaker on Sandgren’s serve to score a mini-break, but shortly thereafter Sandgren ripped a down-the-line backhand winner on Willis’s serve to take it back. Willis and Matkowski then got hot on Lindstedt’s serve. They connected with two solid returns which led to two mini-breaks and three set points. At 4-2, Matkowski fired a big first serve and the Aviators captured the set after a lightning-quick volley exchange, 5-4(2).

The Kastles now trailed, 12-13, when Venus Williams stepped up to play her first match of the season teaming up with Melichar for a very competitive contest against Groenefeld and Naomi Broady. The Aviators have had success all season and went into the set in second place in the league standings, behind the Freedoms’ Taylor Townsend and Raquel Atawo.

Venus brought focused intensity from the start. She won the first two points of the set with two jaw-dropping winners on Broady’s serve, but the Aviators regrouped to hold. The Aviators managed to break Williams serve in the next game, as the Kastles  squandered two game points with a double-fault and a backhand in the net on the deciding point to give San Diego a 2-0 lead. But if the Aviators thought they would run away with the set from there, they were mistaken.

In the next game, the Kastles fought to 3-all on Groenefeld’s serve, then scored the break after Groenefeld missed a routine backhand long. The teams traded two more breaks for a 3-2 San Diego lead in the set and looked on track for another break in Venus’s next service game. After a Williams double fault, San Diego had three break points, but the Kastles hung tough in a key game to keep the match within striking distance. Melichar saved the first with a backhand winner down the middle of the court. Venus saved the remainder with powerful serving and remarkable all-court effort that overwhelmed the Aviators.  On the deciding point, Williams faced stiff pressure after missing her first serve. If she felt any weight on her shoulders, you wouldn’t have known it. Williams cranked a champion second serve that drew a return error from Groenefeld in the ad court to even the set at 3-3.

The Kastles then turned their aim to Groenefeld’s serve. They got to 2-all, but the Aviators dodged any chance of another break with a volley winner and an ace, to go up 4-3 in the set. It was now on Melichar to stay in the set. A double fault on her second service point gave San Diego the edge and an error in the next point gave the Aviators four breakpoints. Melichar saved the first two, but, after an extended rally, the Kastles yielded the fourth set to the Aviators, 5-3.

San Diego led, 18-15, heading into the final set. Williams would have to beat Broady in women’s singles to win the matach outright or force overtime.

The 7-time Grand Slam singles champ had a tougher than expected opening service game, but held on, and broke Broady in her first service game to go up 2-0. Williams was poised to consolidate the lead, but serving up 3-2 in the next game, she made two forehand errors to give Broady the break back. Serving down 1-2, Broady found renewed confidence and held to even the set, 2-2.

Though Williams held serve easily in the next game, she could hardly afford to lose another game. It was exactly the type of pressure situation that has come to define the Kastles legend throughout her remarkable career.

In classic form, Williams broke Broady at love to go up 4-2 and reduced San Diego’s lead to a single game. Serving down 19-20, Williams soared off to a 3-0 lead in her next service game as the Kastles faithful roared with excitement anticipating a tied match, but Broady would not relent. She cracked three consecutive, aggressive winners to earn match point on a 3-all decider. The crowd was stunned by the quick turn-around. With all eyes on Venus, she unloaded a massive serve to Broady in the ad court. When the Aviator’s return went wide, the energized crowd inside Kastles Stadium went crazy jumping to their feet. Williams’ 5-2 fifth-set win tied the overall score at 20-20. The match, and league standings, would now be decided by a Supertiebeaker.

Kastles Stadium could hardly contain the range of emotions that swung dramatically from point to point.

In the Supertiebreaker battle to see who would get to seven points first and win the match, Williams got the upperhand early, going up 3-1, but Broady fought back to tie it up 3-3 and, thereafter, a tense battle escalated. The next two points evened the score at 4-4 after Williams hit a forehand long, but followed it with a crosscourt winner. Broady was able to force an error on Williams’ backhand in the next point to go up 5-4.

With all eyes on Venus down 5-4, both players traded consecutive groundstrokes waiting for their opponent to make an error, Broady ended the rally with a forehand winner down the line to take the lead 6-4, giving her three match points. In the next point, Broady tried to move Williams out of position with a short angle shot and come to net, but Williams was able to run it down and send a hard backhand straight at Broady, who had an open court, but sent the forehand volley just long to the palpable relief of the 2,500 fans in Kastles Stadium to close the gap to 6-5. The tactic worked so well that she repeated it to tie the score, propelling the crowd out of their seats with more chants of “Let’s go Venus! Let’s go!”

At 6-6, Venus served for the match. This point would decide it. When Williams missed her first serve to the ad court, the whole stadium tensed up. Given she served a few double-faults earlier in the match, Kastles fans held their breath in unison as she prepared to deliver her second serve.

In this defining moment, Williams chose to fire her hardest second serve of the night on the most stressful point of the match. The pair exchange a short rally before Williams drove a deep ball to Broady’s forehand that came back short. The Kastles legend saw an opening to move forward into the court and caught the ball on the rise to send a backhand winner cross court to seal the match.

When that point ended, a jubilant Kastles Stadium crowd rose to its feet as Venus Williams, who has won on the sports grandest stages, jumped for joy toward her Kastles teammates exchanging hugs and high fives all with huge smiles on their faces after a night that everyone in attendance will long remember.

The 21-20 victory gave Washington sole possession of the second spot in the WTT standings with a 6-2 record over the now 5-3 Aviators and one game behind the 7-1 Philadelphia Freedoms, who the Kastles play away on Friday night and Saturday at 5 p.m. back in DC.  There are six matches left in the season.