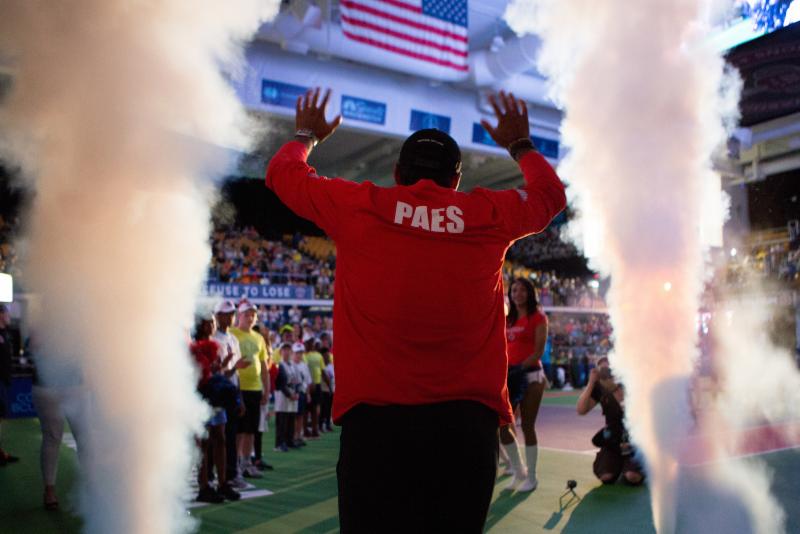 With Kastles legend Leander Paes cheering from the bench last night, DC phenom Frances Tiafoe glided into the net and hit the softest backhand volley of the evening to close out a sensational comeback victory over the New York Empire last night, 20-18. It was Tiafoe’s last match of the season for the Kastles and fans inside Kastles Stadium couldn’t have asked for a more electrifying final performance from their hometown hero and his Kastles singles counterpart Madison Brengle.

The win was crucial for the Washington Kastles. The 6-time WTT champs lost their two previous matches to the San Diego Aviators and Philadelphia Freedoms, and after dropping the opening two sets last night and falling behind 16-11 in the fourth, it appeared that a third was in the making.

This set started close. Lindstedt and Skupski held easily. But the Empire broke Melichar in the third game on a deciding point and Martinez Sanchez built on the lead by winning her first service game to move ahead in the set 3-1.

After a change of ends, the Empire looked to break Lindstedt in his next service game. Skupski and Martinez Sanchez scored the first two points to put Lindstedt in a hole. But the Swede raised his game and won the next four points with powerful serving and volleying to keep the set in play at 2-3. On Skupski’s serve, however, the Kastles were unable to make a dent. The Empire held comfortably to go up 4-2 with Melichar to serve next.

With the momentum now in their court, the Empire consistently attacked Melichar’s serve. They repeatedly drove returns down the line, out of the reach of Lindstedt. Melichar made a concentrated effort to keep even at 2-all, but the Empire persisted to exploit the alleys and broke a second time to take the opening set, 5-2.

Next up, Melichar paired with Madison Brengle in women’s doubles against Martinez Sanchez and Tatjana Maria. This was a pressure-filled set down to the last point. In the first game, the Kastles earned a breakpoint on Martinez Sanchez’s serve at 3-all, but the Empire saved it with impressive defense and a crisp volley winner. In the next game, it was the Kastles who defended a return assault. The Empire got up on Melichar’s serve, 0-3, but the Kastles fought back to win the next three points. Then facing breakpoint #4, Melichar hit a 110 mph first serve to Maria; the Empire returned long to give the Kastles the game.

Both teams exchanged routine holds the next two games to tie the set, 2-2. But after an enormous effort, the Kastles earned a breakpoint at 3-all. While preparing to serve, Martinez Sanchez received a time violation. Recognizing the importance of the point, the Empire head coach Gigi Fernandez called a timeout, which seemed to be a perfect strategic move. When play resumed, the Empire held after Melichar missed a fairly routine volley on this critical point.

Martinez Sanchez and Maria picked up more momentum on Melichar’s serve in the next game, winning the first four points again. The Kastles managed to save the first three with a skillful combination of power drives, lobs and dropshots, but on Melichar’s second deciding point of the set, the Empire prevailed after she sent a return into the net to secure the lead in the set, 4-2.

As discouraging as it may have been, the Kastles didn’t give up. They broke Maria’s serve in the next game, but then couldn’t hold Brengle’s serve to end the set. The Empire won the second set of the night, 5-3, and took a 10-5 lead in the match.

The Kastles turned it around in the third set with Lindstedt and Tiafoe in men’s doubles.  The pair kept the fans and their teammates in suspense until the very last point. In the first game of the set, the Empire’s Skupski and Dennis Novikov earned two breakpoints on Lindstedt’s serve. But Tiafoe saved the first with a volley winner and Lindstedt saved the second by nailing a volley at Skupski’s feet to start the set on top, 1-0. After this, routine holds carried the set to 4-4, with neither team losing more than two points on their serve heading into the third set tiebreaker.

The Empire led 14-9 going into the critical tiebreaker that would determine if their lead would be four or six games – a huge difference with only two sets left to play. The Empire started strong after they scored a mini-break on Lindstedt’s serve to split the opening two points. Two quick mini-holds by Novikov increased the tension in the crowd. Kastles Stadium erupted moments later, however, after Tiafoe cracked two blinding aces to tie the score, 3-all. Seconds later, Lindstedt placed a volley at the feet of Skupski on Skupski’s first service point to earn the team’s first set point. The Kastles then consolidated the set on Skupski’s next service point by blasting a forehand to the body of Novikov, who was unable to return, 5-4(3), to shrink the Empire’s lead to 10-14 at halftime.

The match now hinged on men’s and women’s singles for the Kastles. Madison Brengle and Tatjana Maria played first. It was a highly-anticipated matchup. Maria won their first meeting this season in New York, but Brengle took the second in DC, leading the team to victory in their home opener.

Going into the set, Brengle needed to shrink the Empire’s four game lead or at least prevent it from growing for the Kastles to have a shot at winning the match. But after both players traded breaks to open the set and Maria held to go up 2-1, the Empire extended their lead to a match high of 16-11. But Brengle didn’t panic. She remained calm and held to tie the set, 2-2, then got to work in Maria’s next service game.

After a series of scrappy points, Brengle worked her way to 2-all on Maria’s serve, then suddenly found herself with two breakpoint opportunities after hitting a series of deep groundstrokes to run Maria at the baseline to win one point and a swinging volley to secure another. Though Maria stayed in the point by slicing and dicing and running Brengle around, the Kastles all-star kept the pressure going and was able to hit two-sharply angled groundstrokes to consolidate the break, needing only one opportunity, then held at love to take the lead in the set, 4-2.

At this point, the entire arena believed a comeback was now possible.

Maria responded by playing two very strong points to start her next service game, but Brengle persisted and at 2-all, Maria double-faulted, giving the Kastles again two breakpoint chances. But Brengle only needed one and smacked a backhand winner down the line to score the set, 5-2, and hand the match over to DC’s closer!

The Kastles trailed the Empire 15-16, when Tiafoe took the court for his last time this season against Novikov. In their previous meeting, Monday’s homer opener, Novikov surprised Tiafoe and the home crowd by winning the fifth set in a tiebreak and forcing Tiafoe to clinch the Kastles’ win in a stressful Supertiebreaker. There was no such drama this time around.

Making minimal errors throughout the set, Tiafoe appeared to be able to do what he wished with Novikov. After a quick hold to start the set off, Tiafoe quickly applied pressure in Novikov’s first service game. Tiafoe pushed him to a 3-all deciding point, but the Empire bailed himself out of trouble this time with a first serve north of 130 mph. It was clear, however, to Novikov and everyone in Kastles Stadium that Tiafoe was starting to get a read on his serve.

In his next service game, Tiafoe held to even the match 17-17. Perhaps feeling the match slip away, Novikov uncharacteristically double-faulted in his next service game to fall behind 1-3, giving Tiafoe three break chances to take the lead. The Empire used two strong serves to get to 3-all, but on the deciding point, Frances attacked a second serve to score the break and take the lead in the set, 3-1, and pull ahead in the match for the first time, 18-17.

The energy in Kastles Stadium was intense and as the Kastles faithful sensed that an epic comeback victory was near and stood on their feet for much of the remainder of Tiafoe’s last match and set of the season. Tiafoe fed off the environment and held at love in his next game to go up 4-1. Novikov regrouped his serve in the next game and held to keep the match just tight enough at 19-18, to seize any last minute mistakes that might befall the young Kastle. But Tiafoe was clearly focused. Serving with three match points at 3-1, the DC phenom unloaded a solid second serve, and after a few deep, penetrating groundstrokes, pulled Novikov into the court, forcing the Empire to hit a soft floater down the middle of of the court. Anticipating the shot well in advance, Tiafoe gently jogged forward and put the set and match away with an easy backhand volley to win the set, 5-2, and the match 20-18.

After last night’s win the Kastles remain firmly in second place in the WTT standings. They play the Empire again in New York this Monday.

If you missed this very exciting match last night, you can catch it on ESPN2 Monday Night at 8 PM