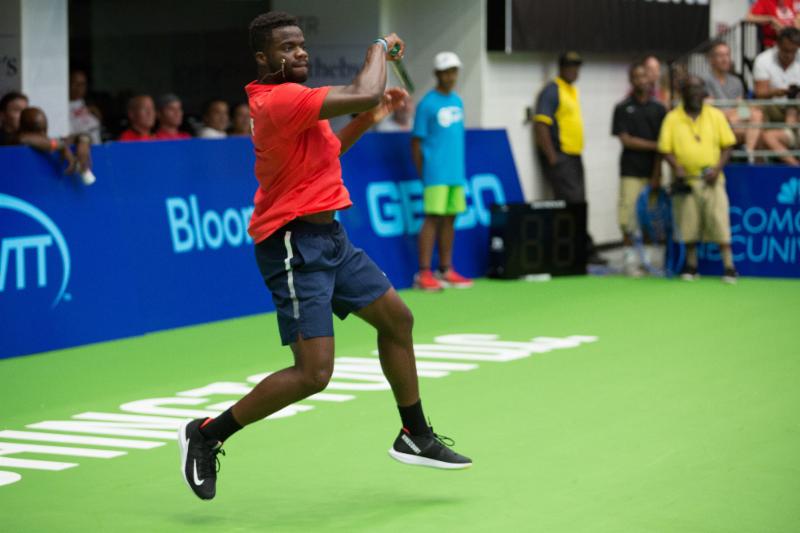 Washington Kastles fans could not have asked for a better match to kick off the 2018 World TeamTennis season than the home opener at Kastles Stadium last night. The Kastles defeated the New York Empire in a nail-biting thriller that was won in a Supertiebreaker by hometown hero Frances Tiafoe, 7-4 on the sixth match point for the Kastles to win the match 21-20 with a roaring crowd of Kastles fans behind them.

After the Kastles come-from-behind victory over the Empire in their home opener Sunday night, the New York team came to DC to settle the score. Perhaps after witnessing the team drop the opening two sets in women’s doubles and singles in New York, Coach Murphy Jensen opted to play Robert Lindstedt and Christina McHale (who will continue to sub for Nicole Melichar until Thursday) first in mixed doubles. But again, New York shot off to an early lead.

The Empire’s Neal Skupski and Maria Jose Martinez Sanchez were on fire to start the opening set. They held and broke McHale’s serve on the first try, but Lindstedt kept the score close. The Kastles picked up a critical game in McHale’s second service rotation. McHale and Lindstedt trailed 2-4 in the set and Skupski and Martinez Sanchez went up 3-1 on the Kastle’s serve to earn three set points, then Coach Murphy called a timeout.

When play resumed, McHale and Lindstedt saved two sets points with huge, booming groundstrokes to force a deciding point. In her last service point of the set, McHale delivered a solid first serve into the Martinez Sanchez backhand that drew an error and a costly game for the Empire. Though Martinez Sanchez served out the set for the Empire in the next game, losing the first set 5-3, as opposed to 5-2, turned out to be a crucial early win for the Kastles.

The women’s doubles set that followed was far more intricate. It began as a battle of returns between McHale and Madison Brengle and Martinez Sanchez and Tatjana Maria. Brengle and McHale broke Maria in the first game, but New York broke back on McHale’s serve in the next game. The trend continued on Martinez Sanchez’s serve, giving the Kastles a 2-1 lead in the set. But another pivotal turning point occurred for the Kastles when Brengle became the first player to hold and go up in the set, 3-1. The game tied the overall match score, 6-6, but there were many more twists to come.

In the very next game, Brengle and McHale earned three break points on Maria’s serve and again looked to break for a chance at a 4-1 lead and the opportunity to hold serve and run away with the set. But the Empire struck back and saved the first two points to force a decider, at which point Coach Murphy called another timeout. When play resumed, McHale took the deciding return on the deuce court, but the Empire changed up their tactics.

Maria set up the serve in the “I”-formation, a crafty doubles maneuver where the server and the volleyer start in the same half of the court and switch once the point begins in an attempt to disrupt the returning team’s rhythm and placement. The maneuver worked. New York won the point and game to retake the match lead, 7-6.

After McHale held the next game to go up, 4-2, it looked like the Kastles were on track to take the lead for the first time, but in the next game on Martinez Sanchez’s serve, the Empire repeated their I-formation tactics effectively against Brengle in the ad court to hold the lead for the team 8-7. The team then carried the momentum into Brengle’s service game. They broke the Kastles all-star at love to force a third-set tiebreak.

The Empire now led 9-7 and had all the momentum going into the tiebreaker. Maria served an ace to score their seventh point in a row. The Kastles ended that streak by scoring a mini-break on Maria’s next service point to even the score, but the Empire were not discouraged. They won the next two points to move within striking distance of a remarkable second-set comeback. But then returning down 1-3 on Martinez Sanchez’s serve, the Kastles won a spectacular point that involved  sensational shotmaking from both players that seemed to reverse the momentum of the match.

Brengle and McHale suddenly began to gel. Brengle served and McHale hit a volley winner. In the next point, Brengle drove home one groundstroke so hard, Martinez Sanchez shanked her forehand into the roof of the stadium, which gave Washington a chance at the set on a critical 4-all deciding point in the tiebreaker that would decide the set and account for a two game scoreboard swing for whoever won the  point. The Kastles didn’t blink.

Brengle hit a solid first serve that coughed up a weak reply from New York and McHale put the point away with another forehand volley to take the set 5-4, and shrink New York’s lead to 9-8.

Men’s doubles gave DC sports fans a first long-awaited look at their hometown hero Frances Tiafoe in action. Since making his WTT debut last season, the College Park phenom’s career has soared. He captured his first ATP title this winter at the Delray Beach Open and on the morning of the match officially reached a career-high ranking of #45 in the world, after a third round finish at Wimbledon, taking down world #33 Fernando Verdasco along the way.

Tiafoe paired up with Lindstedt against Skupski and Dennis Novikov, who also played his first match of the season for the Empire last night. This was a hard-hitting set that caught Tiafoe off guard. The Empire broke him in the first game and managed to maintain the lead for the duration of the set. Novikov’s serve was virtually unbreakable and Skupski was dominating at net.

Though Lindstedt held to control the damage and Tiafoe held critically the second time around, there was no margin for error against the Empire in this set. At 4-2, Lindstedt held his second service game, putting the pressure on Skupski to serve out the set at 4-3. But the Empire did not falter. The team played three lights-out points to earn four set points. Tiafoe stopped the first. Lindstedt stopped the second with a laser forehand past Novikov at net. But Skupski consolidated the set on the next point to extend the Empire’s lead at halftime to 14-11.

The most significant turnaround of the match occurred in women’s singles. The Empire’s Tatjana Maria had success against Madison Brengle the night before in New York by executing a perfectly frustrating assortment of chops, dropshots and spins of all kinds. But in DC, Brengle appeared intent on not giving her opponent an extra second to look at the ball, let alone hit it. The Dover, Delaware native smacked the ball from corner to corner, putting Maria on the defensive as quickly as possible. Though Maria was clearly overwhelmed by the increased pace of Brengle’s ball in DC, she defended the court respectably, chasing down balls and returning them with quality shots in every direction. Yet, no matter what she tried, she came up short. Brengle not only hit forceful shots, she also outran, outmaneuvered, and thoroughly outfoxed her opponent..

Brengle broke and held to go up 2-0 right away hitting a slew of winners. After a monumental effort, Maria managed to hold for 2-1, but that was the last game she won. Brengle proved unstoppable after holding her next serve and breaking Maria for back-to-back 4-0 games to run up the scoreboard and ultimately max it out at 5-1. Winning this set by such a wide margin was instrumental to the Kastles’ victory and was a classic performance by the Kastles’ beloved all-star. It handed Frances Tiafoe a 16-15 lead going into the final set, the first time the Kastles held the advantage all night.

Going into the final set, Frances Tiafoe was clearly the favorite to defeat Dennis Novikov in men’s singles. Novikov is by all accounts a world-class player. He is a former USTA boys national singles and doubles champion and this season alone has captured three ATP Challenger singles titles. But at only 20 years of age, Tiafoe is on the hunt for Major and Masters titles. He’s scored wins over the best players in the world, including current world #3 Alexander Zverev, current world #4 and former US Open champion Juan Martin del Potro, and former world #4 Tomas Berdych, to name just a few. But it turned out that Novikov excelled at Kastles Stadium.

Things started routinely enough, with both players holding serve with relative ease. But in the third game, Novikov broke Tiafoe to tie the match at 17-17. This didn’t appear to phase the Kastles all-star. He broke the Empire immediately in the next game to tie the set, 2-2, and reclaim the lead for the Kastles. Serving up 18-17, Frances won his next service game with an ace to go up 3-2 in the set and further extend the Kastles lead.

Though Novikov’s serve was on fire much of the night, he suffered a slight letdown at this point in the match and Tiafoe seized on the opportunity. Frances was moving quicker, hitting harder, and had more touch, gaining control of the set.  Frances earned two breakpoints on the Novikov serve and won the second to take the game and put the Kastles a game away from the win at 20-17, but Novikov wasn’t going to give up without a fight.

Serving at 4-2, Tiafoe earned two match points fairly quickly at 3-2 in the game. When Novikov saved the first, not many paid attention. But when the Empire saved the second to break Tiafoe on a deciding point, things started to get tense inside Kastles Stadium. The tension was briefly relieved after Tiafoe earned two more match points on Novikov’s serve in the next game, but the Empire saved both of them with back-to-back aces to force a deciding fifth-set tiebreak. Now the Kastles had only a one game lead, 20-19, facing a reenergized opponent.

Frances served first and split points. Novikov served second and split his points. The match could not have been tighter, as the level of play continued to rise. At 3-all in the fifth-set tiebreaker, Novikov was at the peak of his power. He closed out the set for the Empire with a lethal combination of serves and groundstrokes and another ace to force a Supertiebreaker.

Kastles fans were biting their nails and cheering their hometown hero after every point he won. With the score tied at 20-20, Novikov would play one winner-take-all, first-to-seven Supertiebreaker to decide the match.

Tiafoe took the first two points on his serve, which calmed the crowd’s nerves, but Novikov continued to deliver unreturnable serves. At 2-all, it was clear Tiafoe had to raise the level of his own serve and forehands, which he did to go up 4-2. Finally, up 4-3 on Novikov’s serve, Tiafoe received a short ball with the Empire stranded in the mid-court and was able to hit a forehand pass to score a mini break, 5-3, which was the final turning point of the match. Tiafoe won the next point to earn his fifth match point of the evening. When the final score was tallied, it took Tiafoe six match points to finally close out Novikov 7-4 which ended with Frances forcing a Novikov forehand error to the net after a tough baseline rally in the Supertiebreaker and clinch the Kastles’ home opener against New York.

The win also sealed a two match winning streak for the Kastles to open the 2018 season. Tiafoe will take the court again this Wednesday, when the Kastles face the Orange County Breakers.