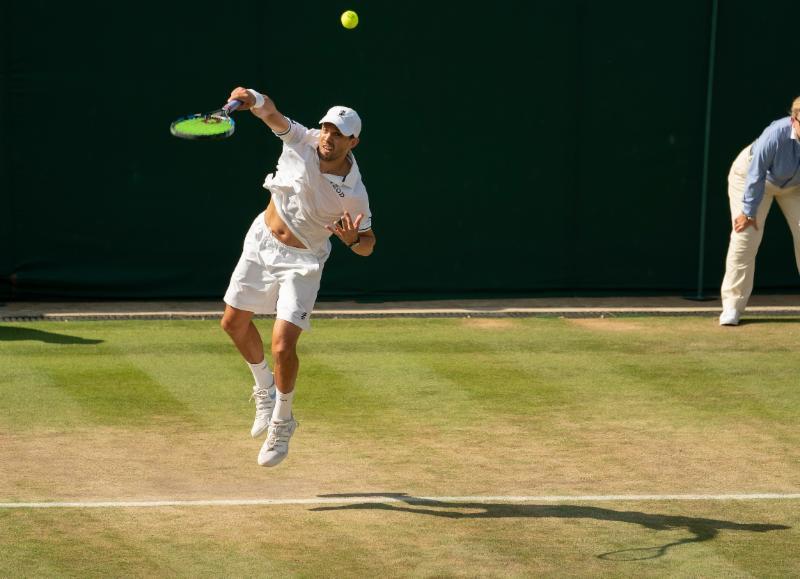 The Kastles extended their run yesterday at the All England Club in London, where the 2018 Wimbledon Championships are now approaching the final rounds of competition.

In men’s doubles, Kastles superstar Mike Bryan and Jack Sock (Springfield Lasers) beat #15 seeds Dominic Inglot and Franko Skugor in an epic five-set semifinal, 6-3, 6-1, 6-7(11), 6-7(4), 6-4, to advance to the championship round. It was a powerful performance that further confirmed Mike’s standing as the best men’s doubles player in the world!

Click here to read more about the Kastles’ newest world #1
Mike and Jack will play #13 seeds Raven Klaasen and Michael Venus in the final this Saturday. Positioned in the top quarter of the draw, Klassen and Venus were considered longshots to reach the final. But after the first round upset of #1 seeds Oliver Marach and Mate Pavic, they managed to reach the quarterfinals without facing a seeded team. In the quarters, Klassen and Venus pulled off their first big win of the tournament over #5 seeds Jamie Murray and former Kastle Bruno Soares in a hard-fought five-setter, but in the final they’ll face their toughest competition yet.

This Saturday, Mike Bryan will look to claim his fourth Wimbledon men’s doubles title, having previously won in 2006, 2011, 2013, while Jack Sock will seek his second title. He won his first in 2014.

Watch the final LIVE on ESPN and the WatchESPN app THIS SATURDAY around 11 a.m. EST

Elsewhere for the Kastles, Nicole Melichar and Alexander Peya advanced to the semifinals in the mixed doubles competition, after their opponents Ekaterina Makarova and Bruno Soares defaulted. The walk-over affords Melichar a bonus recovery day at crucial time in the tournament. In the quarterfinals, she and Peya fought hard to upset #6 seeds Edouard Roger-Vasselin and Andrea Sestini Hlavackova, 7-6(5), 4-6, 9-7. Nicole was also pushed to three sets in her women’s doubles quarterfinal with Kveta Peschke. The #12 seeds bounced back after dropping the opening set to defeat #15 seeds Irina-Camelia Begu and Mihaela Buzarnescu of Romania, 5-7, 6-4, 6-4, to advance to the semis.

In women’s doubles, Melichar and Peschke face #6 seeds Gabriela Dabrowski and Yifan Xu, who beat former world #1 doubles team, Bethanie Mattek-Sands and Lucie Safarova in the quarters, 5-7, 6-4, 6-2. They play on Court No. 1 at 8:00 a.m. EST.

In mixed doubles, Melichar and Peya will go up against #9 seeds Michael Venus and Katarina Srebotnik, who defeated #3 seeds Ivan Dodig and Latisha Chan in the quarterfinals. They play on Court No. 3 – TBA – after Nicole’s women’s doubles match.

Watch LIVE & REPLAY coverage on WatchESPN
And for up to the minute match scores and updates, follow along on Twitter @washkastles #refusetolose