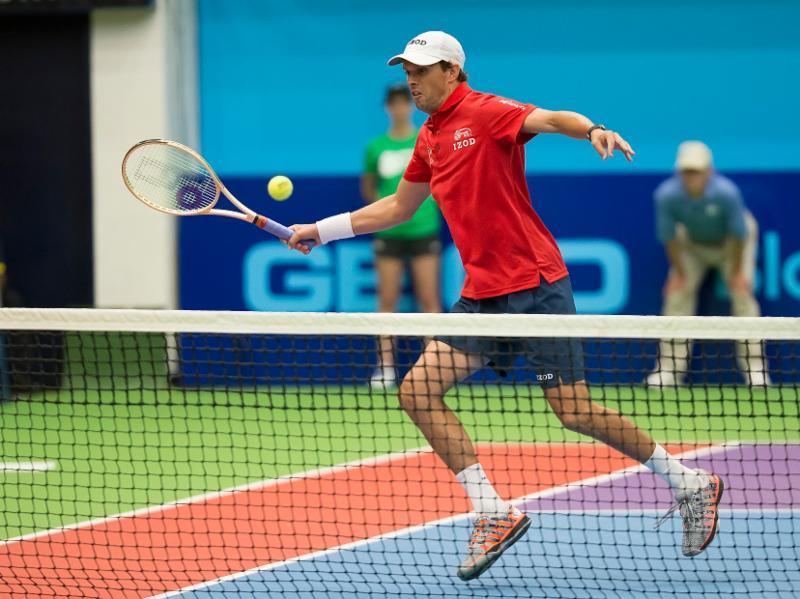 There will be fireworks at the All-England Club this 4th of July, when your Kastles lead off in men’s and women’s doubles at the 2018 Wimbledon Championships. Americans Mike Bryan, Frances Tiafoe, and Nicole Melichar, along with Robert Lindstedt, of Sweden, look to win their opening round matches on Independence Day.

The Kastles will be most competitive in the men’s doubles tournament this year, where they have three teams in contention. Led by 16-time Grand Slam champion Mike Bryan, the entire squad is positioned in the bottom half of the draw with defending champs and #2 seeds Lukasz Kubot and Marcelo Melo.

Mike is the closest to Kubot and Melo in the draw, and the most able to dispatch the reigning champions. One half of the greatest men’s doubles team in history, Mike is a three-time Wimbledon champ and four-time runner-up. He’s also playing incredibly well this season, having won the Miami Open and Monte Carlo Masters. The unknown is how he will fair without his brother Bob, who is still recovering from a hip injury.

At this year’s tournament, Mike will pair up with fellow American Jack Sock, who is a great substitute and, while primarily a singles player, is considered one of the best doubles players in the world. Jack, who will play matches for the Springfield Lasers this season, is a Wimbledon doubles champion (2014) and captured the Indian Wells doubles crown with New York Empire rival John Isner this March, beating none other than Mike and Bob. Mike and Jack are seeded #7 and will face Italians Daniele Bracciali and Andreas Seppi in their first round match this Wednesday. Seppi and Bracciali have a history of winning rounds at the all England Club, but will definitely be the underdogs in this matchup against two formidable Wimbledon champions.

The Kastles other Grand Slam champ, Robert Lindstedt, who has made the Wimbledon finals three times and captured the Australian Open men’s doubles title in 2014, is teaming up with Robin Haase of the Netherlands at this year’s championship. The duo will play #10 seeds Ivan Dodig and Rajeev Ram in their first round match. This could be the doubles opener of the tournament.

The tone will be set by Lindstedt and Dodig, who is also a Slam champion. He won Roland Garros in 2015 and was also a runner-up at Wimbledon in 2013. It’s always close between these two. They split their last two meetings. Lindstedt and Michael Venus defeated Dodig and Nenad Zimonjic at the 2016 Swiss indoors, but at the 2017 Australian Open, Dodig evened the score against the duo with Marcel Granollers. At Wimbledon the dynamic will be different.

Lindstedt is more accomplished than Dodig on grass. The Kastle is a three-time runner-up at the All-England Club, having reached three straight finals from 2010-12. Lindstedt also performed well in his two grass court tuneups. He reached the final of Stuttgart and the semis of Eastbourne. But in doubles, half of the match hinges on your partner.

Haase is a good player that Lindstedt can win with. Between them, Haase has played Dodig and Ram most recently. He lost to the pair in two tight sets at Halle last month, partnering with Granollers, but likely walked away from the match with some valuable insight into their games, insight a doubles champ of Lindstedt’s stature can exploit.

Should they prevail, they could face #8 seeds Nikola Mektic and Alexander Peya in the third round. Mektic and Peya reached the semifinals last year, but will have to get past Jurgen Melzer and 12-time Grand Slam doubles champ Daniel Nestor in their opener. Nestor will play for the Springfield Lasers this season.

And last, but not least, Kastles all-star Frances Tiafoe will pair up with compatriot Jackson Withrow. The Americans will take on British duo Scott Clayton and Liam Broady in a classic 4th of July battle!

The two teams have never faced each other before and are relatively young. Frances is the youngest at 20 years old, but his opponents are not much older and have limited doubles experience. Withrow is the most accomplished doubles player. He won the Delray Beach Open this February with Jack Sock. But on paper, Frances is the second best doubles player. He reached the final of Houston, a well respected ATP World Tour 250-level tournament, in 2017 with Dustin Brown. If the Americans pull out the win, they will likely face #3 seeds Henri Kontinen and John Peers in the next round.

On the women’s side, Nicole Melichar will be the standard bearer for the Kastles in doubles at this year’s tournament. She’ll team up again with 2011 Wimbledon doubles champ Kveta Peschke, with whom she won the Prague Open this spring and reached the semis of Nuremberg and Birmingham. Seeded #12, they will play Monica Puig and Anett Kontaveit in the first round. The last time Melichar and Peschke met Puig was at the Australian Open this winter, where she paired with Kastles all-star Madison Brengle. In that encounter, Melichar and Peschke advanced in straight sets, as they will hope to do again this 4th of July.

Looking ahead, Melichar and Peschke could face #8 seeds Elise Mertens and Demi Schuurs in the third round or #4 seeds and recent Mallorca Open champs Maria Jose Martinez Sanchez (New York Empire) and Andreja Klepac (Orange County Breakers) in the quarters, which would be a very exciting pre-season WTT showdown!