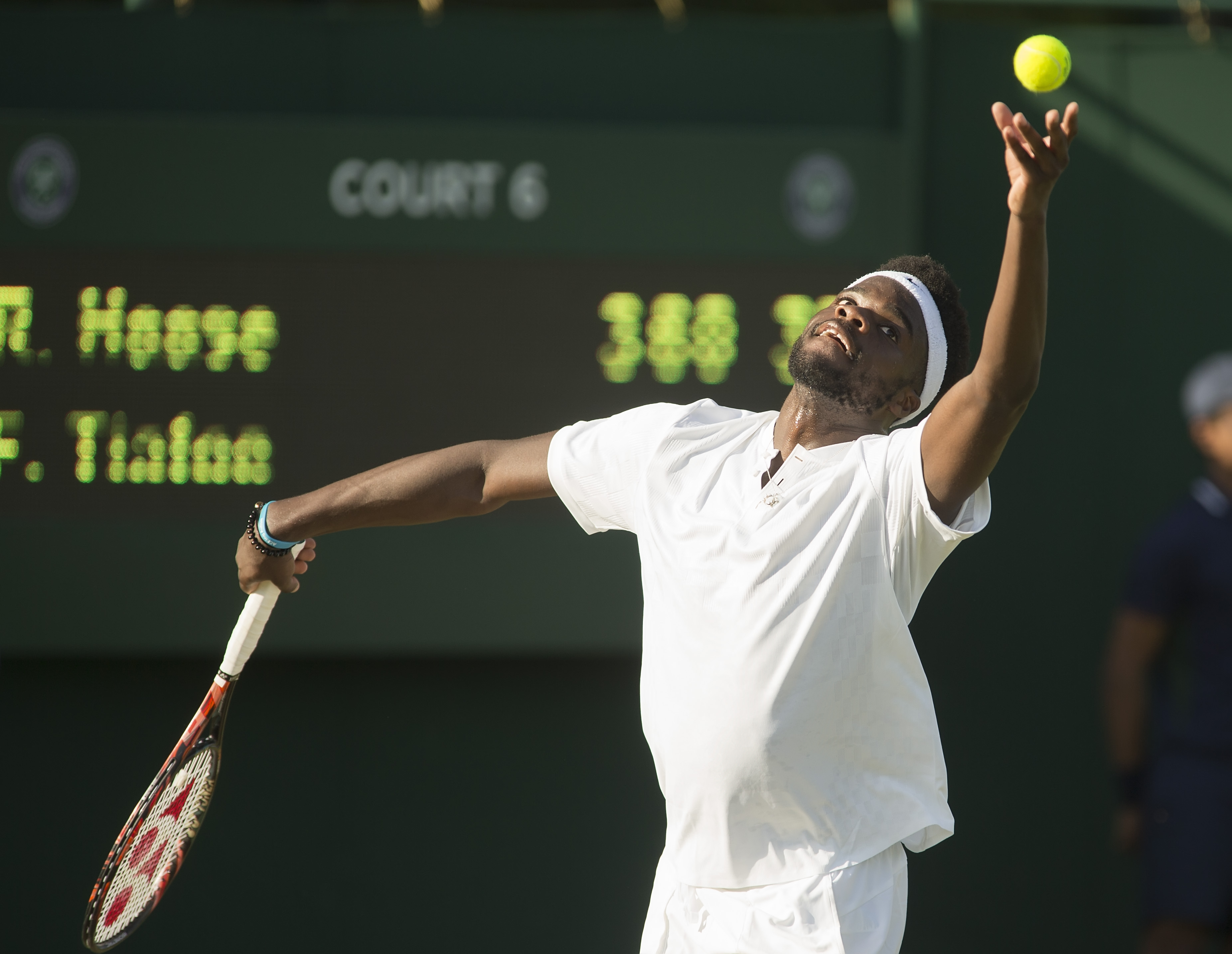 Frances and Tennys Compelling 1st Round Matches Against
Verdasco and Djokovic

The Fortnight Begins This Monday

The grass will be pristine at the All-England Club this Monday, when the 125th combined Wimbledon Gentleman’s and Ladies’ Singles Championships commence at precisely 11 a.m., London time. But your Kastles won’t be shy about roughing it up, as the team’s core roster looks to score big at the oldest, most prestigious tournament in the game on the eve of the 2018 WTT season.

On the men’s side, Frances Tiafoe will begin his 2018 Wimbledon bid across the net from Spanish veteran and #30 seed Fernando Verdasco. This should be a great match between the 21-year-old Kastles star and the 34-year-old Spanish star. Verdasco’s been ranked as high as #7 in the world and, though he’s failed to advance past the first round at the All-England Club in his last two tries, he’s scored some impressive victories this season, highlights include wins over current world #7 Dominic Thiem in Rio and world #6 Grigor Dimitrov in Indian Wells and then again at the French Open.

Frances will have a very good shot at pulling off this win. Tiafoe has performed well against accomplished elders on tour this season. In Miami this spring, he knocked out 32-year-old, former world #4 and 2010 Wimbledon finalist Tomas Berdych to reach the round of 16. And in Portugal, he defeated resurgent 35-year-old vet and former world #21 Gilles Muller on his way to the final of the Estoril Open. Frances also reached his first-ever ATP 500-level quarterfinal at the historic Queen’s Club Championship, one of the most prestigious grass court tournaments in the world, where Verdasco crashed out in the first round.

Watch Tiafoe and Verdasco LIVE this Tuesday at 7 a.m. on ESPN

Should Frances advance, the most dangerous opponent in his section of the draw is #7 seed Dominic Thiem. The two could potentially meet in the third round. They’ve never played before, but the matchup would most definitely attract global interest. Both are widely considered to be among the most promising up-and-coming talents on the ATP Tour. Their first career encounter would be a primetime television event.

The hypothetical dream match of the tournament for Kastles fans would be a fourth round Kastle vs. Kastle showdown between Frances and his new teammate Tennys Sandgren. The matchup is theoretically possible, but practically Sandgren would have to overcome 12-time Grand Slam champion and former world #1 Novak Djokovic in the first round and likely British #1 Kyle Edmund in the third round to setup the encounter.

Tennys has never come head-to-head with Djokovic before, but can definitely withstand the pressure. This year at the Australian Open, Tennys took out two top-10 players (2014 champ Stan Wawrinka and Dominic Theim, then ranked #5) en route to his sensational quarterfinal run. It also will help that Djokovic hasn’t exactly been at the top of his game since 2016, the year he won his last Slam at the French Open. The former world #1 dropped to his lowest ranking in over 10 years and currently sits at #17. Djokovic heads into Wimbledon this year coming off one of the coldest stretches of his career. It would be a great moment for Tennys to capitalize.

For more on your favorite Kastles or to get tickets to watch all of your Kastles stars right after Wimbledon for the 2018 season visit washingtonkastles.com

Venus Leads Off for Kastles on Centre Court

Anyone who knows Venus Williams knows Wimbledon is her favorite tournament. She’s won five singles and six doubles titles and reached the finals of the Championships four times, as recently as last year, when she lost to world #3 Garbine Muguruza. This year, Venus will enter her 21st Wimbledon Championship looking to pick up her sixth singles title at the All-England Club, tying tennis legend and WTT founder Billie Jean King’s record. With a promising draw in the early rounds, the Kastles superstar will have another good shot at advancing deep into the tournament

As the #9 seed, Venus will play Johanna Larsson, of Sweden, in her opening round match on Monday, which bodes well. Larsson has never advanced past the first round in singles at the Championships in seven previous attempts. Still, the Swedish world #62 should not be taken lightly. This spring she made a very impressive run to the final of the Nuremberg Cup, upsetting #5 seed Irina-Camelia Begu in the first round and #8 seed Katerina Siniakova in the semis.

WATCH LIVE THIS MONDAY at 7 a.m. (EST) on ESPN and WatchESPN app.

Should Williams avoid calamity in the first round, she will be able to breath a lot easier, at least for a few matches.

Positioned in the upper-bottom section of the draw, Williams is in the opposite side of the draw from world #1 Simona Halep, world #2 Caroline Wozniacki, and her sister Serena. But the competition will definitely heat up in the fourth round, where world #7 Karolina Pliskova is favored to advance. Pliskova leads their career head-to-head, 2-1, and has won their last two encounters. The good news for Venus is all their previous matches have been played on hard courts and grass is Pliskova’s least favorite surface.

A win over Pliskova would likely mean a quarterfinal matchup against 2017 US Open champ and #4 seed Sloane Stephens who will face the Kastles this season when she plays for the Philadelphia Freedoms. Stephens is red hot these days after reaching the final of the French Open singles championship just last month. That would be a match that all tennis fans would want to see.

Elsewhere for the Kastles, Madison Brengle will also swing into action on Monday. She might have the best early round draw of the team. While she is in the bottom section with #2 seed Caroline Wozniacki, her first round opponent is unseeded Russian Aleksandra Krunic, who has a dicey history at the All-England Club.

Krunic missed the championships last year and only once progressed past the first round, in 2015, when she reached the round of 32. Brengle reached the same round last year, but she upset two-time Wimbledon champion Petra Kvitova to do so. Brengle and Krunic have never played before, but should Brengle win, she would play either Camila Giorgi or #21 seed Anastasija Sevastova, neither of whom is unbeatable. And if Maddy were to prevail again, the highest seed she could possibly face in the third round is #16 Coco Vandeweghe, which is another winnable match.

Brengle and Vandeweghe are split in their career head-to-head, 3-3. Vandeweghe took their last match in the semis at ‘S-Hertogenbosch back in 2016, but Brengle ousted Vandeweghe in the first round of the Australian Open that same year. Were Brengle able to win three matches in a row, then she would likely encounter Wozniacki, who captured her first Grand Slam title earlier this year at the Australian Open.

On Tuesday, world #18 Naomi Osaka will headline for the Kastles in just her second appearance at the All-England Club. The 20-year-old, Japanese #1 will face #59th ranked Monica Niculescu of Romania. The two have never played before, but Osaka will definitely be the favorite. Niculescu has not won a main round match on the WTA Tour since the Miami Open this March. Naomi, on the other hand, has beat former world #1s Serena Williams and Victoria Azarenka and won 10 tour matches since winning Indian Wells, where she knocked off the best players in the game, including current world #1 Simona Halep, to claim her first WTA title.

Beyond Niculescu, Osaka has a good path forward at this year’s championship. The nearest threat is #11 seed Angelique Kerber, who is a two-time Grand Slam champion and Wimbledon runner-up, but hasn’t advanced past the semis of a major since 2016. The two could potentially clash in the third round. If so, it would be a great opportunity for Osaka to test her skills against another tennis great. Should the new Kastle advance further, she might face #6 seed Caroline Garcia, who has only once made it to the quarters of a Slam, but has performed consistently on tour, most recently reaching the semis of Stuttgart and Madrid, as well as the quarters of Rome and Mallorca.