Kastles to Square Off Against Freedoms in Chicago on July 27! 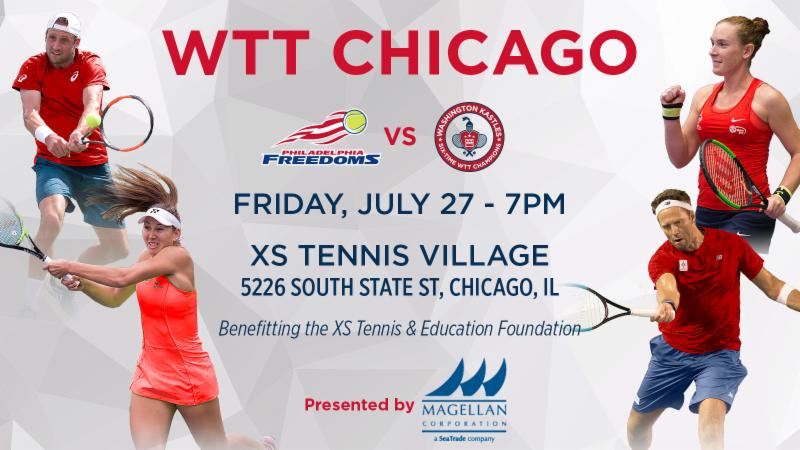 World TeamTennis announced yesterday the Kastles second match against the Freedoms in Philly just got blown west to the Windy City.

On Friday, July 27, the Kastles will clash with the Freedoms in Chicago at the XS Tennis Village on the South Side to kick off the final series against Philly for the season.

Coach Murphy Jensen will take Madison Brengle, Nicole Melichar, Robert Lindstedt, and Tennys Sandgren to make the road trip to Chicago, while the Freedoms will bring 2017 US Open singles champion Sloane Stephens, along with Chicago-native Taylor Townsend, Fabrice Martin and Kevin King. The teams will meet again the following evening in DC, where world #20 Naomi Osaka will headline for the Kastles.

“This match in Chicago gives us the opportunity to showcase World TeamTennis in another major market,” said WTT CEO/Commissioner Ilana Kloss. “Bringing the Freedoms and Kastles to Chicago is a homecoming, of sorts, for WTT. We hope this can be a more regular sight in the city in the near future.”

World TeamTennis has history in Chicago as the city was home to League headquarters between 1985 and 2002. It will have been more than 30 years since a WTT match was played in Chicago, dating back to the final season of the Chicago Fire franchise in 1986. Kloss coached the Chicago franchise to a WTT championship in 1983, a team that featured King on the roster. King also remains involved in the League she co-founded in 1974 as a minority owner.

“Tennis has a home in Chicago and we are thrilled to bring professional team tennis back to the city,” said WTT co-founder and Freedoms owner Billie Jean King.

A portion of the proceeds from the match will benefit the XS Tennis and Education Foundation, which serves underserved Chicago youth with a pathway to college through sports and academics.

WATCH the match LIVE on WTT.com & for more on WTT Chicago, visit WTTChicago.com