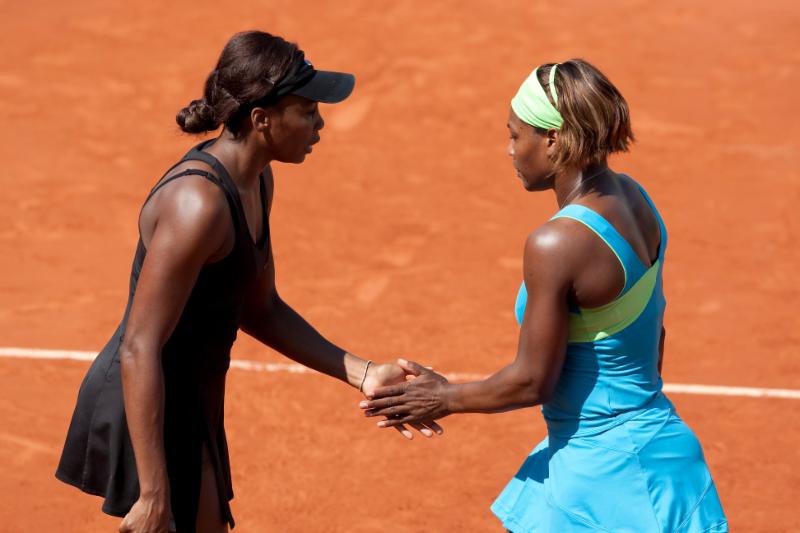 The last time the Williams sisters teamed up in women’s doubles at a Grand Slam they won the title, dropping just a single set along the way.

But that was nearly two years ago at the 2016 Wimbledon Championships and before Serena gave birth to daughter Alexis Olympia Ohanian. A lot has changed since then. What hasn’t is that the Williams sisters were unseeded in the tournament and had to battle past the best doubles teams in the world from the very start to win the championship.

Venus and Serena are back at it again in Paris, in pursuit of their 15th women’s doubles title, and, yet again, are unseeded wildcards.

In all fairness to the officials of Roland Garros, this time around the seeding makes a little more sense. Though the former world #1 doubles team has won three Olympic Gold medals and 14 Grand Slam doubles titles together, including four in a row between 2009-2010, and are undefeated in Grand Slam doubles finals, the last time they won Roland Garros was back in 2010 and the last time they played together, in Fed Cup this February, the sisters lost a dead rubber to Demi Schuurs and Lesley Kerkhove of the Netherlands, 6-2, 6-3. Granted, Serena was only a month back from maternity leave.

As wildcards in Paris, the sisters will face a tough first round team on paper, #14 seeds Shuko Aoyama and Miyu Kato. But as Venus and Serena have repeatedly stated with their racquets in tandem: paper means very little to them.

Their Japanese opponents joined forces earlier this year in Stuttgart and in their four tournaments since, have failed to progress past the first round. Venus and Serena aim to raise that number to five.

Presuming they succeed, the sisters could face more serious competition, #3 seeds Andreja Klepac (Orange County Breakers) and Maria Jose Martinez Sanchez (New York Empire) in the round of 16. Klepac and Sanchez are seasoned doubles players, who have the confidence to beat the best players in the world. They just made an impressive run to the semis of the Mutua Madrid Open, before losing to world #2 doubles team Elena Vesnina and Ekaterina Makarova in two, tight, tiebreak sets.

And get your season tickets to the 2018 Kastles season and SEE VENUS LIVE TWO NIGHTS AT KASTLES STADIUM JULY 25 & 26!

Who’s that with Mike?

Another wildcard thrown into the mix for the Kastles is the unexpected pairing of Kastles superstar Mike Bryan and former Kastle Sam Querrey, who was traded to the Orange County Breakers this spring.

Just weeks ago, Mike and his twin brother Bob, a.k.a. “the greatest men’s doubles team in history,” were poised to reclaim the world #1 doubles ranking after an extraordinary return to form that led them to win back-to-back Masters 1000 titles in Miami and Monte-Carlo, and reach a string of finals, including the 2018 Australian Open.

But while serving in yet another final at the Mutua Madrid Open earlier this month, Bob suffered a hip injury that required the team to retire and concede the title. The Bryans entered Rome a few days later, but withdrew before playing their opening match. Querrey and Rajeev Ram were, coincidentally, their opponents, which officially gave Querrey a rare win over the Bryans.

Who better than Sam to step in for Bob?

Their first round opponents will be Ken and Neal Skupski (New York Empire). The Skupski brothers have been hot in France this year. They won back-to-back doubles titles there this winter: the first a Challenger at Open de Quimper, the second, their first ATP World Tour title of the season at Open Sud de France, where they knocked off serious French competition on their way to the trophy ceremony, including Jeremy Chardy and Fabrice Martin (Philadelphia Freedoms).

The last time Bob and Mike met the Skupskis in the quarter-finals of the U.S. Clay Court Championships in Houston, the Bryans prevailed in a tight Supertiebreaker, 4-6, 6-3, 10-6. It will be interesting to see how the Skupski brothers react to playing step-brothers Bryan and Querrey.

Be On the Lookout for Frances, Tennys, Robert & Nicole!

Luckily for the rest of the men’s squad, they’re in the top section of the draw, away from Mike and Sam, for the time being, at least.

New Kastle Tennys Sandren likely wishes he had more space from #1 seeds Lukasz Kubot and Marcelo Melo, who lurk dangerously nearby, but for the time being there are other threats to overcome. If Sandgren and his partner Scott Lipsky win their first round match against hometown favorites Gregoire Jacq and Benjamin Bonzi, they could face Kastles all-star Frances Tiafoe and Taylor Fritz, who will play his second season of WTT this summer for the San Diego Aviators. First, Tiafoe and Frtiz will have to get past veteran doubles specialists and #13 seeds Edouard Roger-Vasselin and Rohan Bopanna to start their Roland Garros bid.

The winners of this fantasy Kastle vs. Kastle matchup would most likely go on to face Kubot and Melo in the third round. Last year, the pair was nearly impossible to beat. They won six titles, including three Masters 1000 trophies and the Wimbledon men’s doubles championship. But this year it’s a different story. Since winning Sydney in January, Kubot and Melo have only made it past the quarter-finals once, at the BMW Open in Munich, a relatively low ATP 250 tournament.

At the polar opposite end of their section, Robert Lindstedt looks to make inroads with Marcin Matkowski, who will be making his WTT debut this season for the San Diego Aviators. Though the pair have never played together before, they’ve played against each other many times and the results have always been competitive.

Both are seasoned doubles specialists. Lindstedt is currently ranked #52, while Matkowski is ranked #43. But Lindstedt has won more career titles, 22 compared to 18 by Matkowski. And Lindstedt also holds the only Grand Slam title between them, the 2014 Australian Open men’s doubles championship.

In their first partnership, Lindstedt and Matkowski will have the crowd against them. They play French doubles heroes and #6 seeds Pierre-Hugues Herbert and Nicolas Mahut. It should be a close match. Robert has been enjoying a good clay court season. He captured the Istanbul Open on clay earlier this month with Dominic Inglot and just reached the semis at the Geneva Open with Andrei Vasilevski. We’ll see how he plays with Marcin.

Last, but not least, new Kastle Nicole Melichar will stick with trusted partner Kveta Peschke on the clay of Roland Garros. Since joining forces at the Australian Open this January, the American-Czech duo have been steadily improving.

They won the J & T Banka Prague Open women’s doubles championship earlier this month, and before that made a strong run to the final at the Porsche Tennis Grand Prix in Stuttgart, before barely falling to #4 seeds Raquel Atawo and Anna-Lena Gronefeld (San Diego Aviators) in the championship match, 6-4, 6-7(5), 10-5.

In Paris, Melichar and Peschke will be the #13 seeds. They play American Christina McHale and Peng Shuai of China and are just two wins away from a potential showdown with #1 seeds Tímea Babos and Kristina Mladenovic, this year’s Australian Open champions.