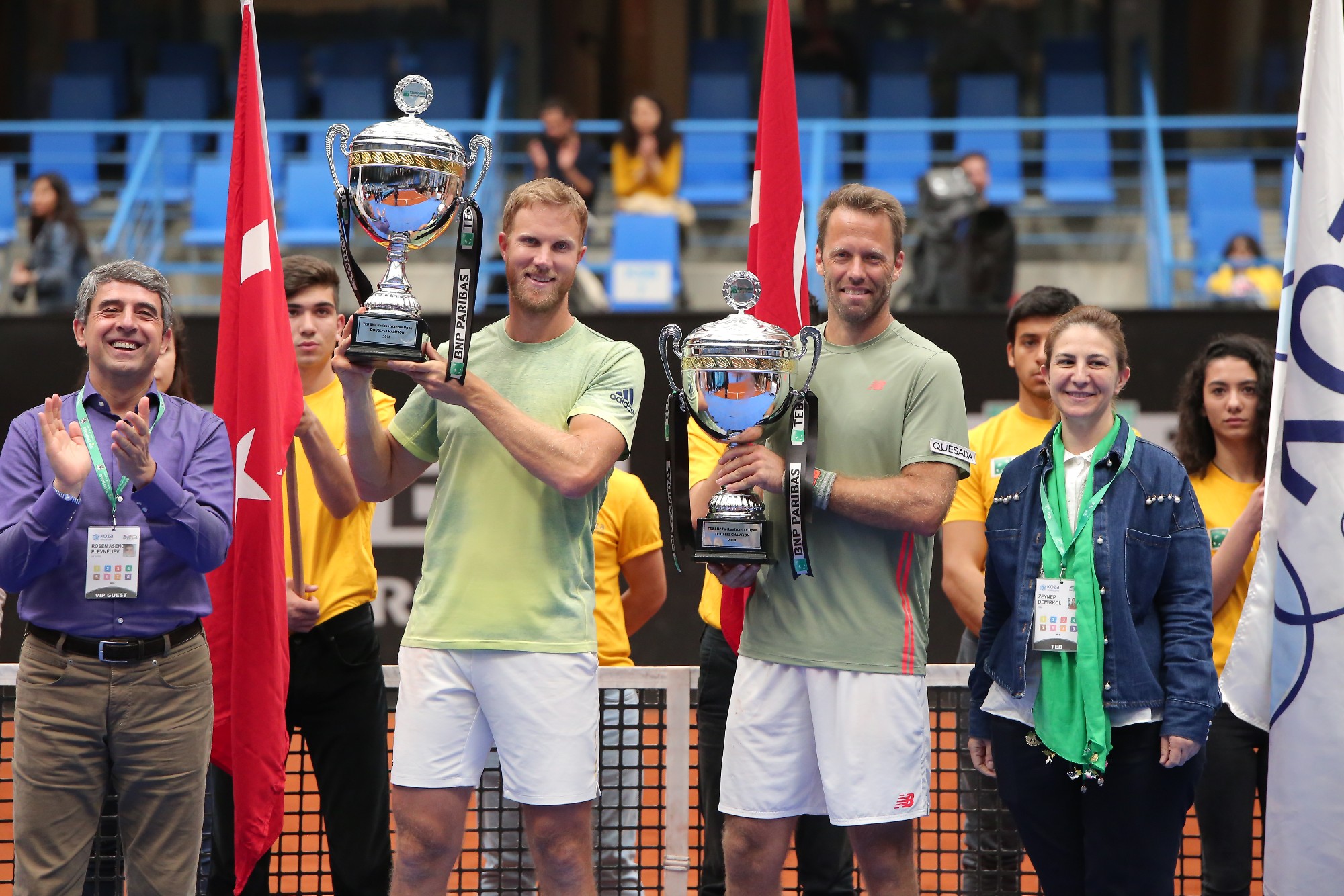 Your 2018 Kastles have been unstoppable in all corners of Europe in the early stages of this year’s clay court season. A big week and weekend for the Kastles has yielded more than a handful of hardware.

Again, the toughest contest for the Kastles came in the first round of the tournament, when Melichar and Peschke were caught off guard by Czech qualifiers Petra Krejsova and Jesika Maleckova. Krejsova and Maleckova took the first set and forced a third set Supertiebreaker, before ultimately yielding 2-6, 6-4, 10-4.

From then on, Melichar and Peschke cruised.

After shellacking Viktoria Kuzmova and Elena-Gabriela Ruse, 6-1, 6-0, in the quarters, the duo scored another bagel in the semis over #1 seeds Andrea Hlavackova and Renata Voracova, 6-4, 6-0, to advance to their second WTA final in a row.

Just last week, Melichar and Peschke made a strong run to the women’s doubles final at the Porsche Tennis Grand Prix in Stuttgart, before barely falling to #4 seeds Raquel Atawo and Anna-Lena Gronefeld (San Diego Aviators) in the championship match, 6-4, 6-7(5), 10-5.

The pair were simply unbeatable in Turkey!

After a breezy win over Roman Jebavy and Florin Mergea, 7-6(4), 6-1, in the first round, the duo passed their first test of the tournament in the quarters, where they met WTT bros Ken and Neal Skupski (New York Empire). In this WTT family clash, Lindstedt and Inglot prevailed, 7-6(3), 6-3, then went on to upset #2 seeds Divij Sharan and Marcin Matkowski (San Diego Aviators), 6-4, 2-6, 10-4, in the semis to move a match away from capturing the title.

In the final, Lindstedt and Inglot were up against #1 seeds Nicholas Monroe and Ben McLachlan, who had beaten a highly-competitive field of players to reach the championship round, including James Cerretani and doubles legend, Daniel Nestor, who was drafted by the Springfield Lasers earlier this spring.

Lindstedt and Inglot dropped the first set alarmingly fast, but bounced back to take the second just as quick and set the stage for a climactic Supertiebreaker to decide the championship. After storming off to a 5-1 lead, the Swedish/Brit alliance earned their first match point at 9-6, but then gradually saw their lead evaporate, adding drama to the final moments of the match. In the end, it took three match points for the pair to close out their opponents and claim their second title as a team.

In 2015, Lindstedt and Inglot won the Winston-Salem Open, defeating Eric Butorac and Scott Lipsky in the final, 6-2, 6-4. The win in Istanbul also marks the 22nd career doubles title for Lindstedt, who won the Australian Open men’s doubles title with Lukasz Kubot in 2014.

In men’s singles, Kastles all-star Frances Tiafoe stunned spectators at the Clube de Ténis do Estoril in Cascais, Portugal when he upset world #11 and recent Miami Open semi-finalist Pablo Carreno Busta, of Spain, in the semis of the Estoril Open. Carreno Busta was the #2 seed and last year’s champion, and the score wasn’t even close. In a mere hour and 14 minutes, Tiafoe dispatched the Spaniard, 6-2, 6-3, to advance to his second career ATP World Tour final.

“I was pretty loose all through the match,” said Tiafoe in his post-match press conference. “I was having fun. I was serving pretty good and was really aggressive. He had no answers for me and things just went my way.”

His two previous opponents also failed to come up with sufficient answers to derail the Kastle’s momentum. In the second round, Frances upset #4 seed, world #28 and last year’s runner-up Gilles Muller, 6-4, 7-5, in just over an hour-and-a-half. Though Muller fired 13 aces, he was unable to hold the service games necessary to defeat his Next Gen opponent, who was especially effective on his return games.

Frances broke serve a total of four times in the match to score his third ATP quarter-final appearance this year!

“Today, pretty much everything went my way,” said Tiafoe after his match against Muller. “Gilles had some chances in the second set, but I was able to recover pretty well. Clay is my favourite surface. Real clay, not what we have in Houston. The surface here is a lot slower, I slide better, and can get more creative. I’m having a lot of fun here.”

Frances definitely had fun in the quarters. He absolutely steamrolled Italian qualifier Simone Bolelli, who is no pushover, 7-5, 6-2. In his previous match, Bolelli came back from a set and a break down to defeat Argentinian Federico Delbonis in three sets, 3-6, 7-5, 6-2.

The highlight of the tournament was actually a first round thriller that pitted Frances against his new teammate, world #51 Tennys Sandgren, who has been playing the best tennis of his career this season. Sandgren reached the quarter-finals of the Australian Open this January and has been performing consistently well ever since, finishing runner-up at the U.S. Clay Court Championships in Houston earlier this spring.

Going into the match, the two had never played each other in an ATP World Tour event. But in their four previous meetings in various qualifying, Challenger, and Futures matches, Frances had proved victorious. In Portugal it was no different.

In this instant-classic Kastle vs. Kastle showdown on the red clay of the Clube de Ténis do Estoril, Frances was pushed hard. After dropping the first set, he held his nerve to gut out the second in a close tiebreak. But the match got tighter in the third.

Serving down 4-5, Frances faced three match points, but denied all of them. The test ultimately proved worthwhile. Gaining more confidence with each save, Frances served with renewed belief in the final stretch of the match, which turned out to be another sensational tiebreaker.

In the final Frances, who is currently ranked #64 in the world, faced Portuguese tennis star Joao Sousa, ranked #68. Sousa had a much easier road to the final. The one and only seed he faced was Kyle Edmund, currently ranked #23. And in the packed Portuguese stadium in Estoril, Sousa was undeniably the crowd favorite. Frances fought the hometown hero admirably, but in the end, Sousa refused to disappoint his legions of fans. The Guimaraes native defeated the DC native, 6-4, 6-4.