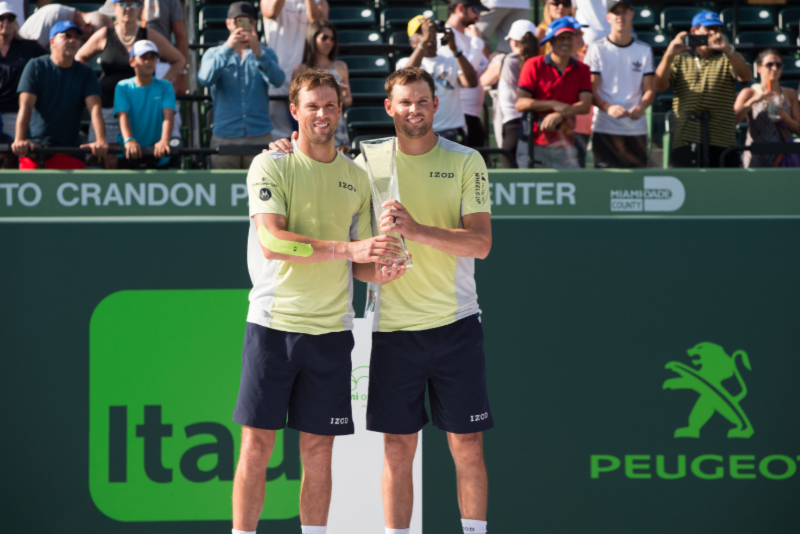 Bob and Mike Bryan added another trophy to their extensive collection this past weekend in Key Biscayne.

It took two overheads at net – one from Bob and one from Mike – for the Bryans to close out Karen Khachanov and Andrey Rublev, 4-6, 7-6(5), 10-4, and claim their fifth Miami Open and 37th career ATP World Tour Masters 1000 title. Immediately afterwards, the greatest men’s doubles team in history leapt toward the center of the court to seal the win with a signature Bryan brothers chest bump.

The victory was well earned. It had been nearly two years since the Bryans claimed a Masters crown and the last title they won was the BB&T Open in Atlanta last summer. The slump raised some doubts about when and if  the twins might lift another trophy.

After a semi-final finish at the US Open last summer, the brothers suffered a series of early round losses, which peaked at the ATP Finals in London, where they were eliminated in round-robin competition. It was the earliest exit for the Bryans at the year-end championship since a surprise upset by Kastles legend Leander Paes and Radek Stepanek in 2012.

But the brothers picked up momentum in the new year with a run to the Australian Open final and another final finish in Acapulco and Indian Wells earlier this month. It’s fitting they snapped their slump in Miami, where the brothers are de facto hometown favorites. Bob lives just up the coast in Sunny Isles Beach with his wife, Michelle, and their three children.

“I’m really proud of the way we’re playing,” said Bob, “how we’ve turned it around from a fairly rough last year. We’re building every week. I feel like we’re gaining momentum and I’m very optimistic going into the clay-court season. I think we’re playing with a lot of joy now, and it’s showing in our results.”

Indeed, the Bryans are gearing up for a new act.

The turning point in Miami occurred in the quarter-finals. After losing the first set comprehensively to Raven Klaasen and Michael Venus, and trailing throughout most of the second set tiebreak, the Bryans were faced with the sobering possibility of another early round exit. But serving down 4-5, Bob found his first serve and Mike found his volley and, in quick succession, the brothers rifled off two points to take the lead for the first time in the match and maintained their focus until the match was won, 3-6, 7-6, 10-8.

It was a return to volley basics that appeared to catapult the Bryans to victory in Miami. The brothers breezed through their semi-final opponents, Ben Mclachlan and Jan-Lennard Struff, 6-1, 7-6(4), maintaining a high first serve percentage and hitting crisp volley winners.

They carried their new-found form into the final, where they were confronted by a hot, young Russian team. At 21 and 20 years old, respectively, Khachanov and Rublev mowed through the top section of the draw, knocking out #6 seeds Bruno Soares and Jamie Murray and #3 seeds Oliver Marach and Mate Pavic, with a brutal brand of NextGen power baseline play.

The Russian duo took the first set and a break in the second, but Bob and Mike weathered the storm with renewed belief.

“We just tried to make them play, tried to get into some more points,” said. “Then they actually played human there at the end, which was nice. But we were just trying to throw everything at them, using all of our experience and doubles prowess to beat them and luckily, it worked.”

The prowess included, at its core, a deadly assault on the net, which forced their opponents further and further back, and into more awkward positions, until the court was the property of the Bryans.

Don’t Miss the Bryans in DC this Summer! Get Your Season Tickets Today!