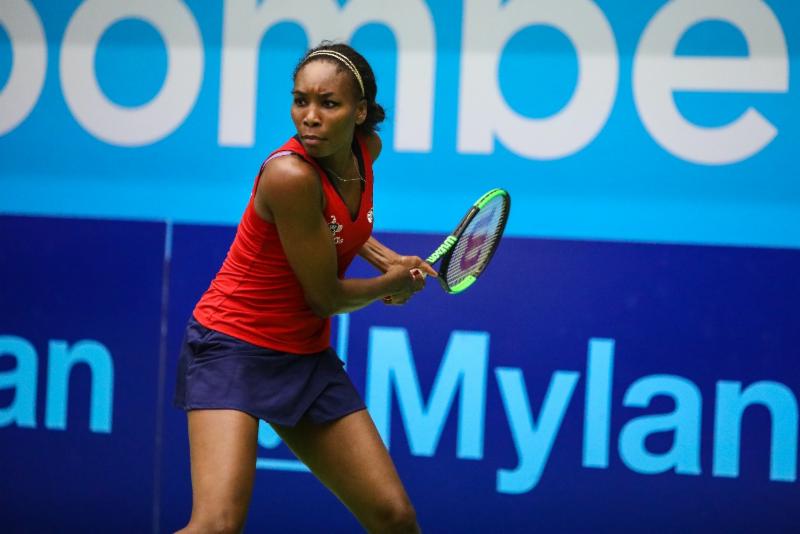 Venus Advances to Round of 16

Bryans March On in Men’s Doubles

The Kastles have been tested early at the 2018 Miami Open in Key Biscayne, but have shown their fighting spirit and met all the challenges.

Kastles superstar Venus Williams was pushed to the limit in her second match of the tournament by #29 seed Kiki Bertens. After jumping off to a fast 5-0 lead, Venus lost her game and seven straight games in the process to drop the first set 7-5. After that, Williams was forced to play catch up for the duration of the match. Just when it looked like the Kastle had taken the upper hand, after winning the second set to level the match, Williams suffered another letdown, at one point, falling behind 1-4 in the third. Bertens even held three match points, including two on her serve at 5-3!

But in the end, the determined will of Venus would not be broken. Faced with the prospect of an early round loss at her hometown tournament, the three-time Miami Open champ responded with fearless offense, her signature strategy, and prevailed, 5-7, 6-3, 7-5, to advance to the round of 16.

“That’s why you play to the last point and that’s why I love this game,” said Venus after the match.

In the previous round, Venus fought hard to get past Russian qualifier, Natalia Vikhlyantseva, 7-5, 6-4. According to the Miami Herald, afterward Williams was in no mood to chat.

“She gave brief answers to five questions,” wrote Michelle Kaufman for the Herald, “then said ‘Thank you, goodnight’ and got up and left.”

Tonight, Venus plays British world #11 Johanna Konta for a spot in the quarter-finals. The two are tied 3-all in their career head-to-head. Konta defeated Williams in the semi-finals of last year’s championship on her road to claiming the Miami title. But Venus has won the last two times they played in Rome and Wimbledon.

It’s a rematch you won’t want to miss!

n men’s singles, Kastles all-star Frances Tiafoe sent a signal to the tennis establishment that his win in Delray Beach last month was no fluke.

Earlier this month, Edmund surpassed his injured compatriot, Andy Murray, to become the new British #1. The 23-year-old earned the distinction. His run to the semis at this year’s Australian Open, upsetting world #12 Kevin Anderson and world #3 Grigor Dimitrov in the process, was nothing short of extraordinary, but it couldn’t prevent the eminent assault your hometown hero unleashed on the Brit in the face of serious adversity.

Edmund served for the match at 5-4 in the third set, but Frances didn’t flinch. He brought his A game from the very first shot and continued the intensity until the final point was scored, 7-6(4), 4-6, 7-6(5).

“I dug really deep,” said Tiafoe after the match. “I had to compete really hard. He was serving for the match and I had to stay tough. When his legs started to go towards the end, I just had to try and keep him out there.”

It was high-level tennis!

Despite Tiafoe cranking 15 aces to Edmund’s mere 7, the Brit outperformed him in total first serve and first return points won. Edmund led in both categories by 3 percentage points. But when it came to second serve and return points won, Frances proved to be the superior player. He led the former 48% to 42% and the latter by 58% to 52% of total points played.

Next up, Frances takes on world #13 Tomas Berdych for a spot in the round of 16. It’s a big opportunity for the DC phenom. With world #1 Roger Federer out of the tournament, the top-half of the draw is wide open for the taking.

Can our Kastle go the distance?

Elsewhere for the Kastles, Bob and Mike Bryan continued the trend of amazing comebacks.

Starting a set down to Dominic Inglot and Marcus Daniell, the Bryan Brothers stormed back to level the score in the second and force a Supertiebreaker, which the brothers dominated, 6-7(3), 6-4, 10-3.

The four-time Miami Open champs hope to continue the momentum in their second round match against Leonardo Mayer and Diego Schwartzman, who barely squeaked past Marcin Matkowski and Aisam-Ul-Haq Qureshi, 11-9 in the Supertiebreaker. A prime spot in the quarter-finals will be on the line.