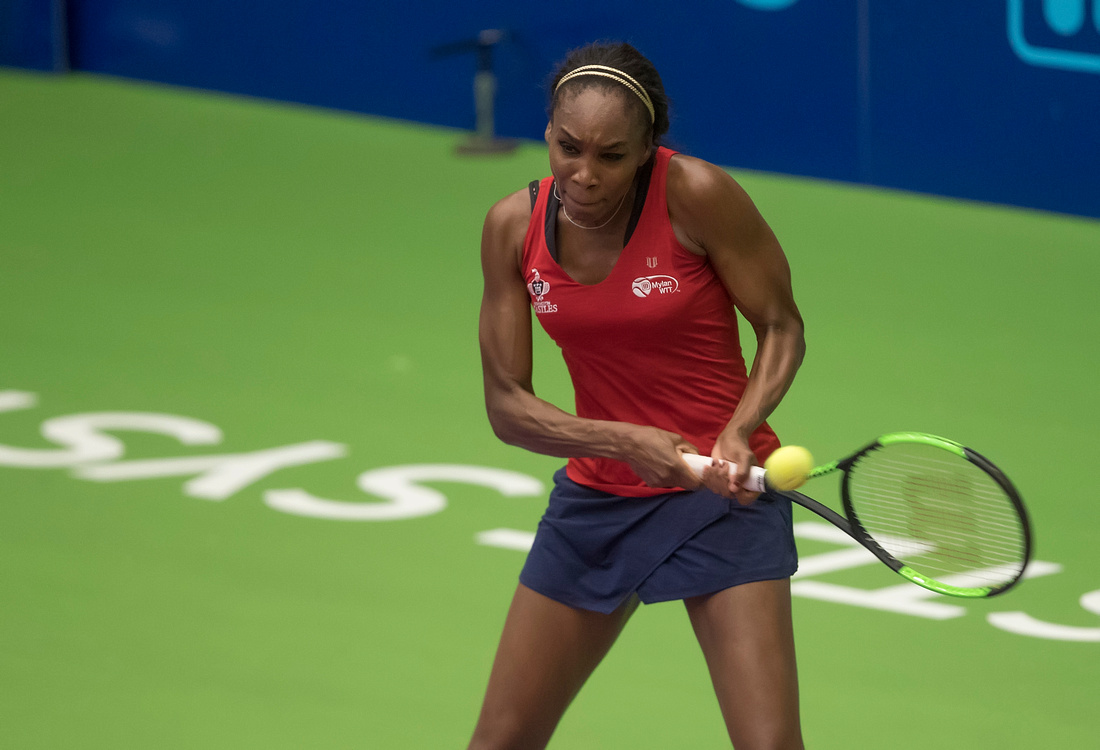 It may be snowing in Washington, but the Kastles have arrived in sunny Miami!

The 2018 squad sets their sights this week on the Miami Open on Key Biscayne island, one of the biggest tournaments of the season. It will be the first combined men’s and women’s event for the new team with over $16 million in combined prize-money is up for grabs!

As always, your Kastles will be among the major contenders.

Kastles superstar Venus Williams is looking to win her first title of 2018 at her hometown tournament. As the #8 seed, positioned in the bottom quarter of the draw, she received a bye in the first round and will play a qualifier in the second. Williams is the favorite to reach the quarterfinals in her section, as is #2 seed Caroline Wozniacki, who won her first Grand Slam singles title this January at the Australian Open.

Wozniacki has been hot lately. She defeated Venus at the WTA Finals in Singapore last year in two close sets, but Williams outperformed her in Indian Wells, reaching the semi-finals, compared to a round of 16 finish for the Danish former world #1.

The two biggest threats to Venus’s road to the quarters are potential encounters with #29 seed Kiki Bertens of the Netherlands in the third round and British world #11 Johanna Konta in the round of 16. Both are formidable opponents. Venus has never played Bertens before and is tied 3-3 with Konta in their career head-to-head, although Williams won their last two matches.

Leading off for the Kastles in women’s singles, Madison Brengle is poised to do some damage. Positioned in the upper-bottom half of the draw, she faces 19-year-old Aryna Sabalenka in the first round TONIGHT last on Court 7. The Belarusian is currently ranked #63 in singles, but is still trying to find her footing on the WTA Tour. She is still a frequent qualifier at many of the big tournaments, but that didn’t stop her from upsetting world #19 Svetlana Kuznetsova just last week to advance to the third round of Indian Wells.

Should Brengle get past Sabalenka, she would face a familiar opponent, current world #9 and two-time Wimbledon champ Petra Kvitova. Maddy owns their career head-to-head, 3-1, and most recently knocked the Czech southpaw out of her favorite tournament in the second round of last year’s Wimbledon Championships. If Brengle managed to score a fourth win over Kvitova, she would likely face Daria Kasatkina, who made an impressive run to the final of Indian Wells last week, before losing to Naomi Osaka.

Watch LIVE on ESPN3 and the Watch ESPN app

After winning his first ATP singles title last month at the Delray Beach Open, Kastles phenom Frances Tiafoe has to be feeling good about his chances in Miami. The Next-Gen sensation finds himself positioned smack in the middle of the top quarter of the draw and will play Argentine Nicolas Kicker in the first round of the men’s singles championship. Ranked #87 in the world, Kicker has never won a singles title and has no notable final finishes to speak of. He did, however, manage to do some damage in Indian Wells and Australia, where he won two rounds at each tournament.

If Frances can manage to avoid being an early casualty, he will play Britain’s Kyle Edmund in the second round. Seeded #21, Edmund has been playing very well of late. He has yet to win an ATP title, but has been performing well in the big tournaments. He reached the semis at the Australian Open, upsetting world #12 Kevin Anderson and world #3 Grigor Dimitrov in the process.

Should Frances get past Edmund, he would likely encounter former world #4 Tomas Berdych, who has 13 career titles and 18 final finishes (including the 2010 Wimbledon Championship) to his name. In the event Frances makes a deep run in Miami, he could face former Kastle Kevin Anderson in the round of 16 or world #1 Roger Federer in the quarters, an opponent the DC native knows too well.

Elsewhere in men’s singles, new Kastle and current world #58 Tennys Sandgren will be vying to consolidate his recent gains in the rankings, after his sensational run to the quarter-finals at the Australian Open. He plays Guillermo Garcia-Lopez of Spain the first round. The Spaniard is no pushover. The 34-year-old is currently #69 in the world in singles and has been ranked as high as #23. He didn’t fare too well at the Australian Open, but performed respectably in South America, reaching the quarters at both the Argentina and Brazil Opens. Should Tennys get past him, he will face another Spaniard, Fernando Verdasco.

Verdasco has been a force on the ATP World Tour for well over a decade. He reached a career-high ranking of #7 in the world and has won 7 singles titles; and the veteran is showing no signs of slowing down. He just reached the final of Rio, defeating Dominic Thiem and Fabio Fognini decisively, among others, along the way. The winner of this second round clash will likely have the good fortune of playing Roger Federer for a spot in the round of 16.

In men’s doubles, Bob and Mike Bryan return for their 20th appearance in Crandon Park. The Kastles doubles superstars have won the Miami title four times and have a 53-15 career winning record at the tournament. Last year the brothers were stopped in the semi-finals by Nicholas Monroe and Jack Sock (Lasers). This time around the Bryans will look to make their third final of the season and hope to capture their 25th Masters 1000 championship and 115th career title as a team.

Seeded #4, Bob and Mike will play Dominic Inglot and Marcus Daniell in the first round and, as the favorites in the upper-bottom quarter of the draw, are set on a collision course with #2 seeds Henri Kontinen and John Peers in the semis.

Since joining forces in 2016, Kontinen and Peers have dominated the men’s doubles game. They’ve captured 13 titles together, including the Australian Open and two ATP World Tour Finals. They’ve also proven to be difficult opponents for the Bryans. Kontinen and Peers have won all three of their encounters. Should the teams meet a fourth time in Miami, it will be exciting to see if the Bryans can reverse the trend.

In women’s doubles, new Kastle Nicole Melichar will be vying for the title along with partner Kveta Peschke. The pair are playing solid tennis of late. They reached the round of 16 at the Australian Open earlier this year. In Miami, they hope to keep the momentum going. They play British wildcards Johanna Konta and Heather Watson in the first round. Should Melichar and Peschke prevail, they will likely have the uphill task of playing #1 seeds Ekaterina Makarova and Elena Vesnina in the second round. Makarova and Vesnina first have to get past WTT Family duo Genie Bouchard (Empire) and Sloane Stephens (Freedoms).

And WATCH ALL MATCHES LIVE on ESPN3 & the Watch ESPN app