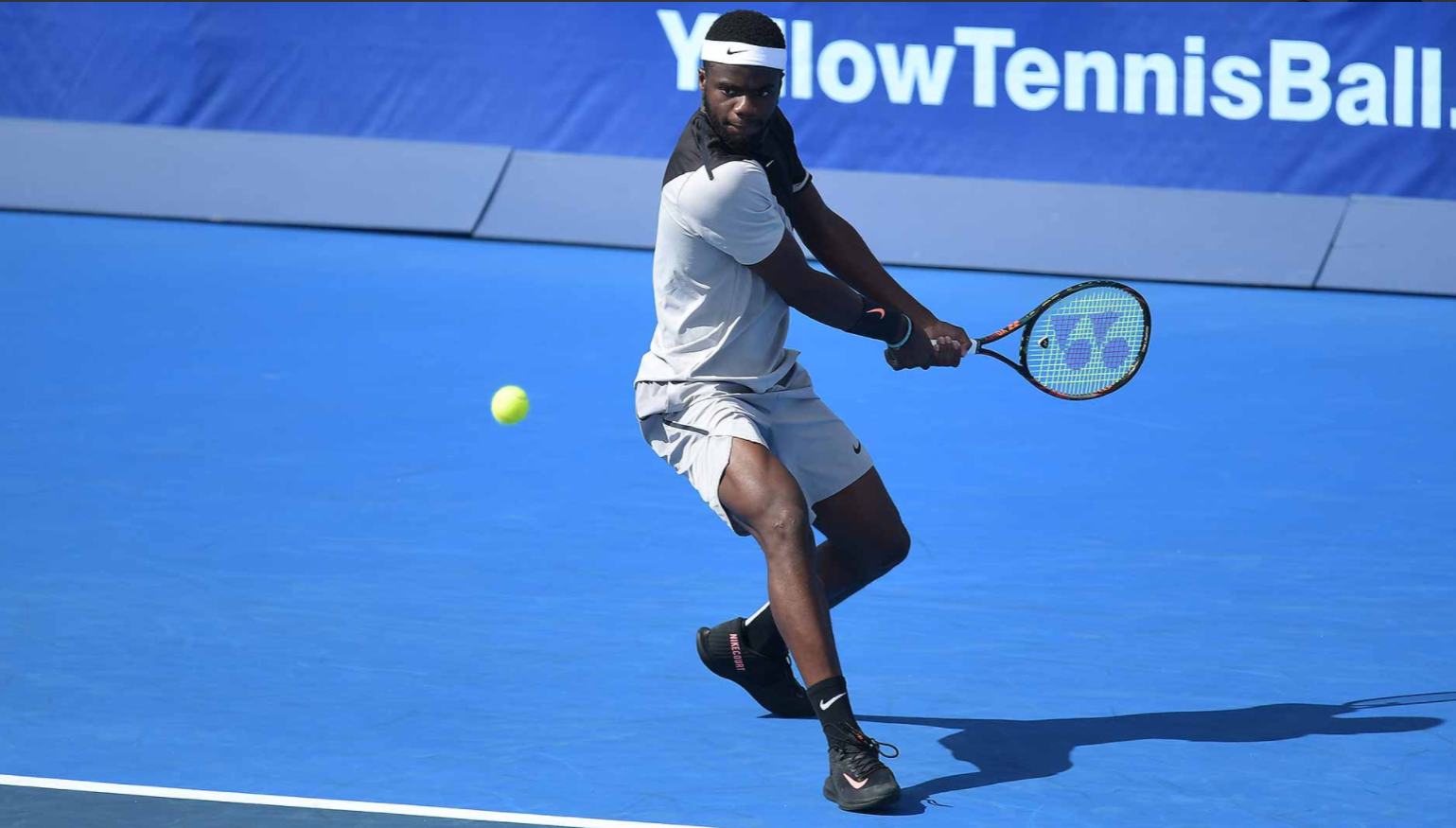 Youngest American to Win an ATP Title Since Andy Roddick in 2002!

It was windy in Delray Beach this Sunday for the Delray Beach Open final, but it only blew one direction: toward Kastles all-star Frances Tiafoe. The 20 year-old, DC native achieved a career milestone after defeating German world #64 Peter Gojowczyk, 6-1, 6-4, to claim his first ATP World Tour singles title. In doing so, Tiafoe became the youngest American to win a title since Andy Roddick in 2002.

“I can’t believe it,” said Frances on court after the match. “If you asked me ten years ago if I was going to win a title at 20 years old, I probably would have laughed. This is an unbelievable feeling.”

The final was a breeze, compared to the lead up. As Frances put it, “[I played] a lot of long matches, a lot of late nights.”

Tiafoe was pushed to three sets against Aussie world #88 Matthew Ebden in his opening round match. Ebden had previously beat Frances in the first round of Brisbane, less than two months ago. But in Delray, Frances avenged the loss, taking down Ebden, 6-2, 2-6, 6-2.

The Kastle may have found new belief after his performance the previous week in New York. There, at the inaugural New York Open, Tiafoe reached his first-ever ATP singles quarter-final, beating world #1 junior and 2018 Australian Open boys champion Sebastian Korda and Dudi Sela, before losing to the eventual champion, former Kastle Kevin Anderson, in a close three-setter, 6-3, 5-7, 6-4.

But Frances gained real momentum after defeating his childhood idol, 2009 US Open champ and current world #10 Juan Martin del Potro in the round of 16. DelPo had also recently scored a win over the Kastle, knocking him out of the Australian Open in the first round. But yet again, in Florida an improved Tiafoe settled the score, 7-6(6), 4-6, 7-5.

In the quarters, Tiafoe faced another huge test against a legitimate peer, NextGenATP champ and Australian Open semi-finalist and world #29 Hyeon Chung. After dropping the first set, Frances battled back to take the second and score the decisive break in the third that put him in a position to close out the match at 5-3, when play was abruptly suspended overnight due to rain. The Kastle only needed to hold serve one more time to advance to his first ATP singles semi-final, but the Kastle had to think about that all night.

“I slept terrible that night,” said Tiafoe in his post-match interview. The next day would prove to be a serious test for the Kastle. Frances held multiple match points against Chung that night, but was unable to convert them. Would he find the strength to finish the job the next day? Would the rain delay kill his momentum? Would he return cold?

When the moment of truth arrived, your Kastle didn’t flinch. Though it took 8 match points, Frances ultimately showed the world his resolve and closed out his NextGen rival, 5-7, 6-4, 6-4.

As satisfying as the win was, Frances didn’t have long to celebrate. That night he had to turn around and play another fast-rising star in the semis: 18-year-old, world #45 Denis Shapovalov, the youngest player in the world’s top-50, who burst on the world stage last summer after beating Juan Martin del Potro and Rafael Nadal back-to-back, before reaching the semis of the Montreal Masters. The semifinal in Delray was equally a big opportunity for Shapovalov. He was looking to reach his first ATP finals, as well. But in this contest, Frances proved to be the superior competitor. He defeated the Canadian star comprehensively, 7-5, 6-4, to advance to his first ATP singles final.

In the final, Frances faced an opponent who was equally eager to make a breakthrough. A veteran compared to Frances, at 28 years of age, Gojowczyk has made steady gains into the world’s top-100 in the last couple years. Currently ranked #64, the German played solid tennis to get to the final. He knocked off WTT Family members John Isner (Empire) in the round of 16 and Steve Johnson (Breakers) in the semifinals. But Gojowczyk was no match for Frances on this occasion.

Frances got down to business right away. After holding serve quickly to open the match, he broke Gojowczyk in the very next game on his first break point opportunity. In the following game, Frances was challenged with a break point on his own serve, but defended it with an ace and went on to close the game out in successive points. And with a double service break under his belt, shortly thereafter, Frances soared to a 5-0 lead in the first set. Though the German was able to stave off the bagel with a service hold, Frances quickly consolidated the set in the next game in a mere 25 minutes.

In the second set, Tiafoe was tested in his first service game. Gojowczyk earned a couple break points, but the Kastle proved, yet again, he was up to the task. He saved them all and held to put the pressure back on Gojowczyk, at which point, the German was no match. Frances dominated Gojowczyk’s serve with flatter, more penetrating forehands to take the first break in the second. Though Gojowczyk was able to break back in the fourth game to put the set back on serve, he failed to extend the opportunity. Frances promptly broke back to reclaim the lead and Gojowczyk was never able to recover. Tiafoe kept up the pressure and served for the match at 5-4.

The victory in Delray Beach will boost Frances inside the ATP world top-60, which now gives him direct entry into all Masters 1000 and ATP 500 events, and spares him the difficulty of facing the top players in the world in the opening rounds of tournaments.