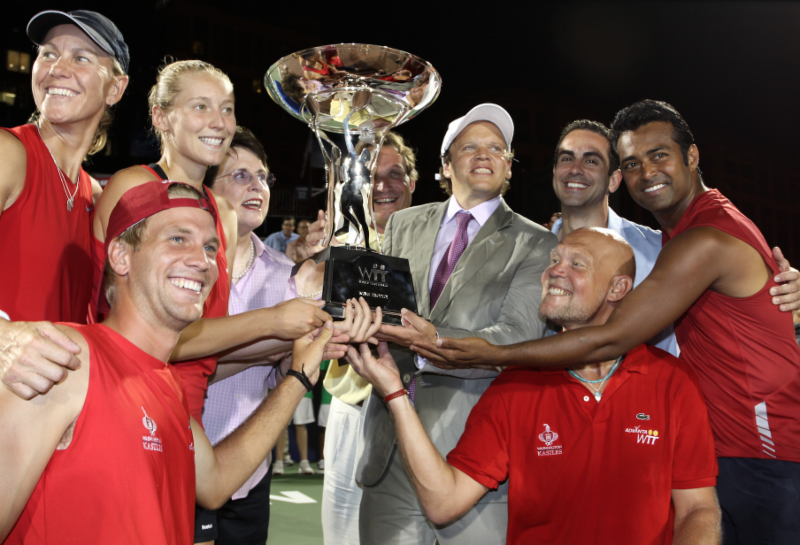 WATCH: The moment of triumph; The Kastles win their first WTT title

To commemorate the Kastles 10th-anniversary season, we’ve reviewed the team’s most memorable events, episodes, incidents, and milestones over the years, and selected the 10 Greatest Moments in Kastles History. We hope this vibrant look back inspires you to look forward to another historic season!

On Sunday, July 26, 2009, in front of a breathless sold-out home crowd at Kastles Stadium hoping to witness a very rare sports championship for a Washington team, the pressure to beat the Springfield Lasers in the 2009 Advanta WTT Championship final and capture the Kastles’ first King Cup fell on the unlikely shoulders of Olga Puchkova. Chants of “Olga! Olga!” rang throughout the arena. The Belarusian starlet made her WTT debut that summer as a full roster player for the Kastles and was an integral part in the team’s success that season, but this was truly a monumental moment in Kastles history.

It was monumental for the future of World TeamTennis.

The final featured classic performances by the Kastles Scott “Boom Boom” Oudsema, who was one of the team’s first roster players, former world #1 doubles player Rennae Stubbs, and the first season for what ended being the long-time Kastles Captain tenure of Leander Paes, winner of 18 Grand Slam doubles titles.

Oudsema led off for the Kastles with a commanding 5-3 victory over the Lasers’ Raven Klaasen, who today plays for the San Diego Aviators and is now one of the best doubles players in the world. It’s telling that after the match, “Boom Boom” was named the Championship Finals MVP by virtue of his games won percentage in the match.

Paes and Stubbs had a tougher row against Martin Damm and world #1 doubles star Liezel Huber in the second set. The Lasers broke the Kastles on Paes’s serve in the first game, which turned out to be a harbinger for a very competitive set that culminated with a tiebreaker. Giving it everything they had, Paes and Stubbs narrowly won the set , 5-4, to secure a modest three-game lead going into the third set.

In the last event before halftime, the Kastles Paes and Oudsema faced off against Klaasen and Damm in a rousing set of men’s doubles. Neither team gave an inch in this highly-competitive thriller. Another electrifying tiebreak ensued, which Paes and Oudsema skillfully managed to convert another 5-4 victory to give the team a 15-11 halftime lead.

The Kastles had a four game lead at halftime. (Photo Credit: Kevin Koski)

Stubbs and Puchkova were the heavy underdogs going into the women’s doubles set, as they would face Vania King (the 2009 WTT Female MVP and future Grand Slam doubles champion) and Huber one of the world’s best doubles players. But they quickly seized the momentum, jumping to a surprising 3-1 lead and it looked like the Kastles were building an insurmountable lead at 18-12 and were on the way to the Championship.

But then out of nowhere, an unplanned marriage proposal in the crowd (involving a Kastles cheerleader) following a long TV timeout completely iced the 38 year old Stubbs before her service game. She followed the long break with two double faults and was clearly rattled. The Lasers seized the momentum and made an astonishing comeback, winning the next four games to take the fourth set, 5-3, to shrink the Kastles lead to only two games going into the fifth and deciding set, 16-14! The packed Kastles faithful were stunned silent by the turn around in the match and their diminished prospects for a title.

The marriage proposal that turned the match around and nearly cost the city of Washington a coveted sports championship. (Photo Credit: Jack Gorman)

On one end of the court was King, who was clearly the best women’s singles player in the league that season, having only dropped one of 15 sets played and staged several high-stakes, come-from-behind victories for the Lasers throughout the season. On the other end was Puchkova, the young, extremely talented, but sometimes nervous Russian, who had had a tough season ranked near the bottom of the 2009 WTT women’s singles standings and who was assigned the task of clinching the championship in the face of renewed Lasers momentum.

King outplayed Puchkova for much of the set, jumping to a 4-2 lead and tying the overall score at 18-all with a chance to serve for the match. King went up 3-1 in the game and with three nail-biting Championship points for the Lasers, it appeared the Kastles’ first WTT title might evade them. The Lasers on the bench locked arms for an anticipated victory celebration, but Puchkova fought off all three championship points with a combination of aggressive shots and steady counter-punching to breathe new life into the Kastles fans. In the next game Puchkova took her play a step further, and, with newfound energy, she held serve to tie the set, 4-all, and force a tiebreaker with the Kastles leading 20-18.

The fifth-set tiebreaker is where Puchkova truly shined. Everything flowed her way. She cleaned up a deflated King in seven snappy points to secure the tiebreaker, 5-2, the set, 5-4, and the match, 21-18.

Kastles Stadium erupted with cheer and ended an incredible night that no one in attendance will ever forget!

It was an extra-special moment for Murphy Jensen, who had taken over as head coach just that spring.

“This whole season has been about one thing,” said Coach Murphy afterwards, “bringing a championship trophy to Washington. Our team really came together and we could not have done it without the amazing Washington fans supporting us along the way.”

The Washington Kastles lift the King Cup, the first many to come. (Photo Credit: Kevin Koski)

Later that summer, the Kastles were honored at a ceremony by Mayor Adrian Fenty with a key to the city. Fenty presented the key to Kastles owner Mark Ein and Coach Murphy Jensen in tribute to the Kastles first championship and the team’s commitment to Washington D.C. and the greater metropolitan community through local charities and youth tennis clinics.

“It’s very exciting to have this award presented to the District’s first professional Tennis Team,” said Mayor Fenty. “We are honored to present a key to the city to the Washington Kastles, not only for their success on the court, but also for their commitment to the District’s communities and our youth.”

“It truly was a dream season for us, on and off the court,” said Ein. “From being asked to host the championship, to winning our first King Trophy in front of our fans, to seeing the smiles on kids’ faces while they enjoyed the matches and clinics, it’s been a truly unforgettable season. We’re humbled to receive this honor from the city for our contributions to the community and amazed by the support we’ve received from our fans over the past two years.”