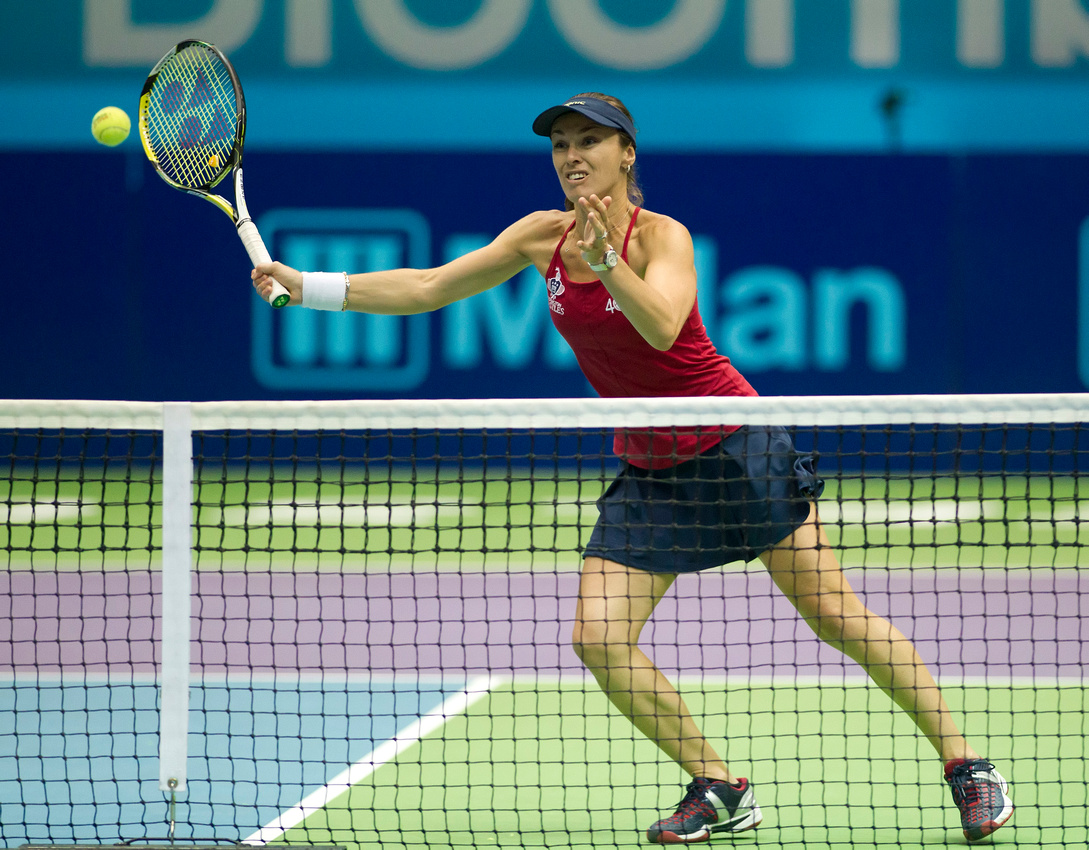 After winning her opening round match at the WTA Finals in Singapore last week, star Kastle and world #1 doubles player Martina Hingis posted an intriguing message on Twitter: “Now that the cat is out of the bag…” followed by a link to her Facebook page. The emojis from the over 21,000 fans who clicked on the link ranged mostly from approval to love to tears, in that order.

“Here we are for the third, and final time,” wrote Hingis, referring to her previous two retirements. “Looking back now, it’s hard to believe that almost exactly 23 years ago I made my professional debut. The years that followed have been some of the most rewarding years of my life, both personally and professionally, but I believe the time has come for me to retire, which I will be doing after my last match here in Singapore.”

Since making her WTA debut at the age of 14 at the Zurich Open in 1994, Hingis has won a career total of 25 Grand Slam titles (5 singles, 7 mixed and 13 women’s doubles). She became the youngest player in WTA history to achieve the world’s #1 ranking in singles at the age 16 and simultaneously held the singles and doubles #1 rankings for a total of 29 weeks! Only Martina Navratilova held both for longer. In 1998, she won the Calendar Slam in women’s doubles and in 2016 completed the Career Slam in mixed doubles with her long-time Washington Kastles teammate, Leander Paes.

In World TeamTennis, Hingis’s achievements are legendary. In her 10 years of league competition, she was named Female MVP in back-to-back years in 2012-2013 and named Female Finals MVP in 2014. And in her five seasons with the Kastles, she helped lead the team to three Mylan WTT Championship titles, amassing a 75-20 record in total sets played in singles, doubles and mixed competition, and contributed to Washington’s historic 34-2 winning record during that period, including a record-breaking fifth consecutive King Trophy in 2015.

The Hall of Famer’s run came to an end in the semi-finals of the WTA Finals in Singapore. After capturing nine titles in 2017 with her partner and co-world #1 Yung-Jan Chan (and hoisting two mixed doubles Slams with Jamie Murray), the pair were defeated 6-4, 7-6(5) by Timea Babos and Andrea Hlavackova, who ultimately went on to win the tournament.

“We both wished for a better ending, you know, like winning the trophy,” said Hingis in her post-match press conference. “They were just too good today. That’s what happens. This is life. This is tennis. This is the game.”

The world #1 reflected further on her exceptional career.

“Overall I’m very proud of my career,” said Hingis. “Of course there are matches I’d like to play over, but some of them, I imagine, I also got lucky to get away with, whether it was in singles, doubles, any time. I wouldn’t change with anybody for anything.”

When asked why she is retiring after just regaining the world #1 ranking, Hingis replied, “It’s every athlete’s dream to walk away on top.”

On Sunday, WTA President Micky Lawler delivered a touching speech in a ceremony honoring Hingis and WTA CEO Steve Simon presented her with a commemorative plaque celebrating her career. Though the world #1 did not speak herself, the tears she wiped away from her eyes spoke volumes.

For those of us holding back tears of our own, it may be worth noting that Martina concluded her announcement on Facebook with a ray of hope that fans might still see her on a tennis court yet.

“This isn’t goodbye,” wrote Hingis. “As history shows, I haven’t been able to stay away from tennis for long in the past, and I am looking forward to seeing what new opportunities lie ahead of me. I believe the best is yet to come and will continue to share my experiences with you!”

We sure hope so!