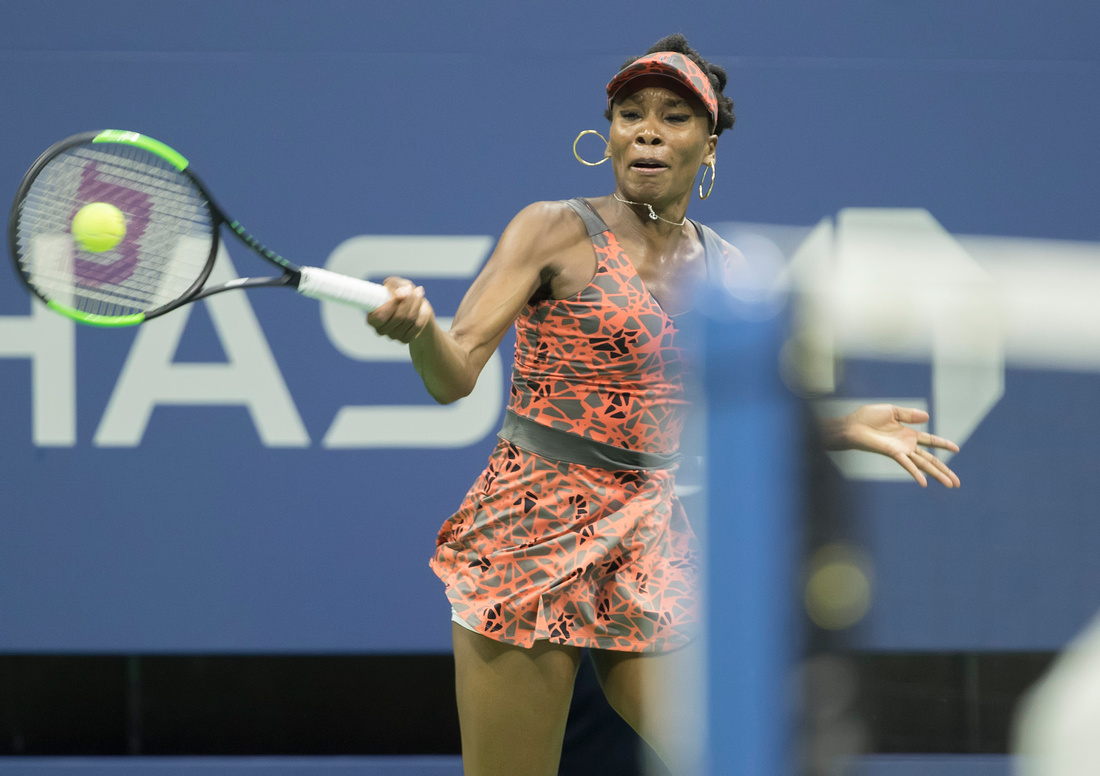 Kastles star Venus Williams showed why she has won seven Grand Slam titles Tuesday night. The two-time US Open singles champ and #9 seed at this year’s tournament blasted her way to a three-set victory over #13 seed and two-time Wimbledon champion Petra Kvitova, 6-3, 3-6, 7-6 (2), in the quarter-finals.

“This match meant a lot to me, obviously, playing at home and of course it being a major,” said Venus in her post-match press conference.

The last time the two competitors played each other was in 2014, when Kvitova prevailed in a third-round match at Wimbledon, 5-7, 7-6(2), 7-5. Kvitova then went on to win her second Wimbledon title. Again, in New York, Kvitova presented Williams with a formidable challenge. The tall and lithe lefty fired 35 winners to Williams’s 21 and won 3 of 4 breakpoints, compared to 3 of 11 from Venus.

“She could defeat anything no matter what’s thrown at her,” said Venus. “It was amazing to see her shine today.”

After winning the first set routinely, Kvitova came back to win the second and take the lead in the third. But with the crowd behind her, Williams found the strength to thwart Kvitova’s mid-match rally.

The turning point came in the middle of the third set. Serving down 1-3, Venus dug deep to produce her signature brand of power serving and baseline bashing to hold and then break to even the score. The next six games produced high-octane, heart-pumping points that electrified the crowd and ultimately led to a deciding tiebreak. At this juncture, Williams ran away with the match. After a nervy double-fault serving for the match at 6-1, she quickly regrouped and cashed in the win on the very next point.

“I have to say I felt every single one of you guys behind me, all 23,000,” Venus told the sold-out crowd in Arthur Ashe Stadium in her on-court interview after the match. “I mean, that feels good. It feels amazing, and I didn’t want to let you guys down.”

Venus thanks the crowd for their support during the match. (Photo Credit: USTA/Darren Carroll)

The win propels Williams to her 23rd Grand Slam semi-final and first semi appearance at the Open since 2010. Her opponent this Thursday will be fellow American and Freedoms star Sloane Stephens, who has endured an emotional journey this year. It is her first major semifinal after a year-long setback due to a foot injury that required surgery and rehabilitation for most of the season.

“I’m getting teary eyed, this is incredible,” said the unseeded 24-year-old, after her own thrilling three-set win over #16 seed Anastasija Sevastova in the quarters. “When I started my comeback before Wimbledon, I could have never even dreamed of having these results in my home Slam, at my favorite tournament. It’s indescribable.”

Williams and Stephens have never met in a tour event before, but they played once this season in World TeamTennis in Philadelphia. There, Venus prevailed, 5-2, leading Washington to a 20-15 victory over the Freedoms. In New York the dynamic will be completely different.

“Whatever happens, I have to focus on what’s happening on my side of the court,” said Williams about her game plan against Stephens. “[I’ll] make evaluations when I’m out there in terms of strategy and see what’s working.”

Venus will look to land a spot in her third major final of the year, having previously reached the finals of the Australian Open and Wimbledon Championships. She is the sole remaining player in the tournament who has won a Grand Slam singles title. She won her last major at Wimbledon in 2008 and her last U.S. Open in 2001. She plays Thursday on Arthur Ashe Stadium.

Watch Primetime Coverage of the Semis on ESPN Beginning at 7 p.m. EST