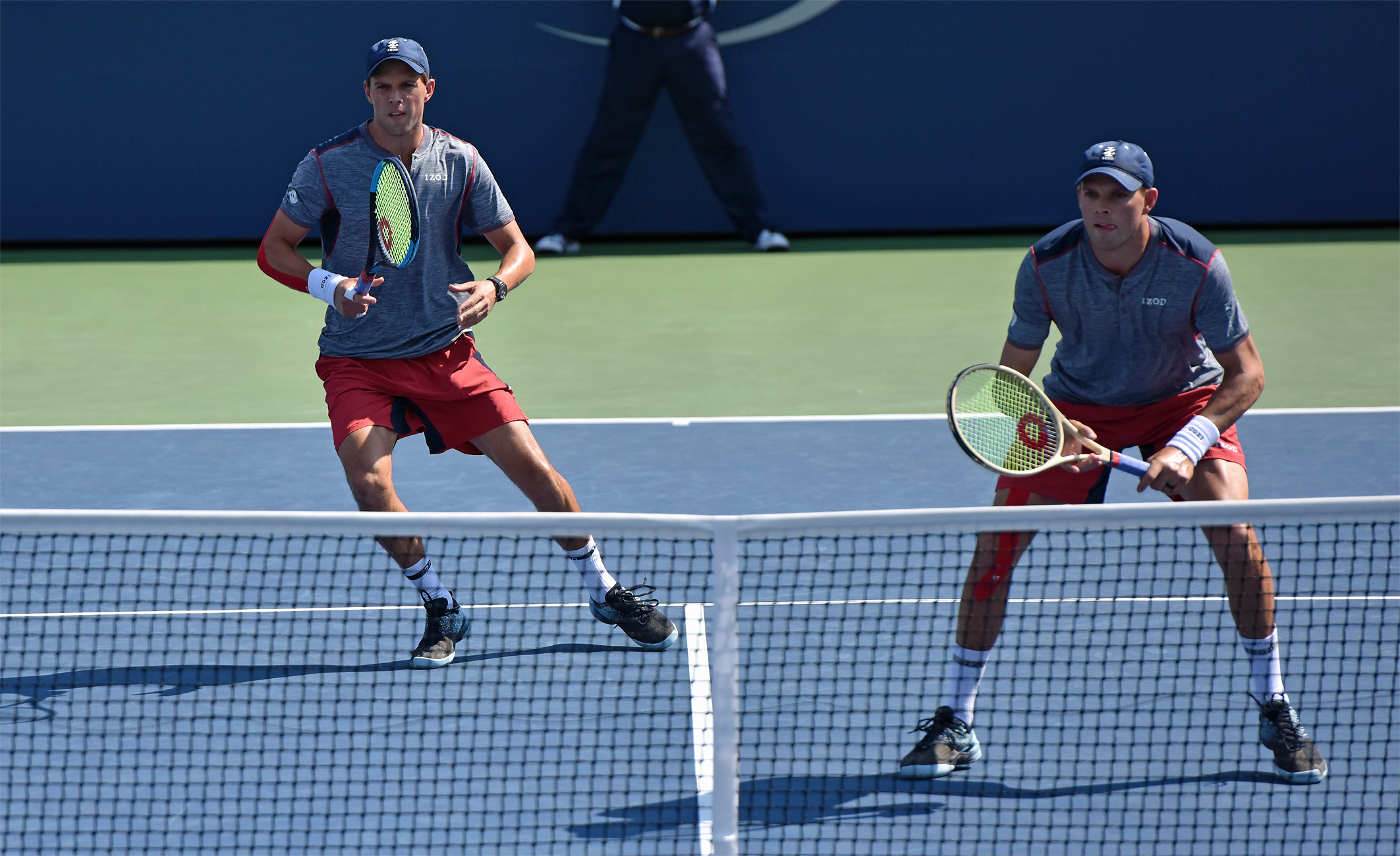 The Kastles doubles squad is killing it in Queens this year!

In their 13th quarter-final appearance at the US Open, #5 seeds Bob and Mike Bryan comprehensively dismantled Julien Benneteau and Edouard Roger-Vasselin in men’s doubles yesterday, 6-3, 7-5, to advance to their 10th career semi-final in New York. It was a masterful display of tennis from the five-time US Open champs.

“I think we’re there,” said Mike after the match. “I think we’ve been playing well all year. It’s just piecing it together and stringing matches in a row.”

The world famous twins sure strung it together against Benneteau and Roger-Vasselin.

They skillfully defended their serve, successfully averting 9 of 10 break point opportunities. Benneteau and Roger-Vasselin, meanwhile, out aced the brothers 11 to 4, but committed 15 unforced errors, compared to a mere 6 by the Bryans. This differential proved costly for Benneteau and Roger-Vasselin. Of total points played, the Bryans won 82-68 – 14 point margin – three of which were breakpoints.

The last time Bob and Mike won the championship was in 2014 and have not won a major title since. They reached the finals of Roland Garros in 2015 and 2016, and the Australian Open earlier this this year. Next up, they face #11 seeds Feliciano and Marc Lopez (no relation) on Thursday for a spot in the final.

In mixed doubles, the Kastles also cleaned up.

Reigning Wimbledon champs and #1 seeds in New York Martina Hingis and Jamie Murray survived a quarter-final scare against Abigail Spears (Lasers) and Juan Sebastian Cabal. After winning the first set easily, the second slipped away, as Spears and Cabal reeled off 12 winners in the process of sweeping the set, 28-16, in total points played to force a match tiebreak. It then took Hingis and Murray until mid-way through the 10-point decider to reverse their opponents’ momentum. At one point, they were down 3-5, before ultimately prevailing, 6-3, 2-6, 10-8.

Next up, Hingis and Murray play CoCo Vandeweghe and Horia Tecau in the semis on Thursday for a chance to clinch the top half of the draw. Vandeweghe and Tecau previously defeated #4 seeds Bruno Soares and Timea Babos in the quarters.

In the bottom half of the mixed doubles draw, veteran Kastle Anastasia Rodionova continues to bring her A-game to Flushing Meadows. She and Oliver Marach pulled off another thrilling win over #8 seeds Lucie Hradecka and Marcin Matkowski, 6-3, 2-6, 10-8, to advance to the semis. They play Hao-Ching Chan and Michael Venus on Thursday for a chance to hopefully face Hingis and Murray in the final.

And in women’s doubles, Martina and Yung-Jan Chan will finally get a chance to play Chan’s younger sister Hao-Ching Chan, a.k.a. “Angel” and Shuai Zhang in their highly anticipated sibling quarter-final. They play today, third on Grandstand, around 2 p.m. EST