US Open Highlights: Querrey’s Star Rises After He Dominates Zverev and Takes Over #1 American Ranking; Venus Williams Advances to Quarters 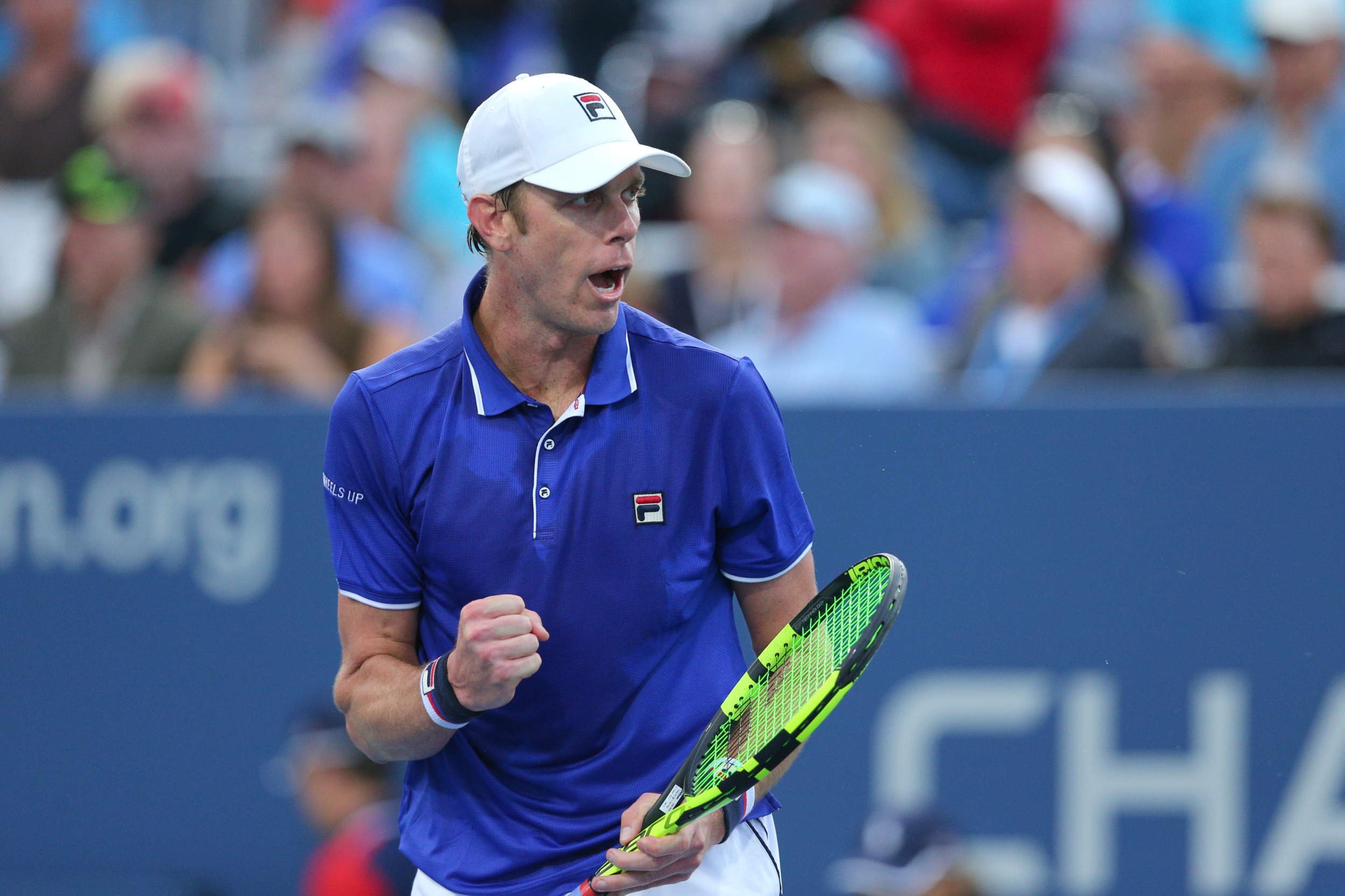 Sam Querrey is on fire in New York!

In a mere hour and 16 minutes, the star Kastle routed 27th ranked Mischa Zverev in his first night match on Arthur Ashe Stadium last night, 6-2, 6-2, 6-1, to advance to his first US Open quarter-final. It was an impressive display of tennis from #17 seed and last American left in the singles draw. Querrey hit 55 winners to Zverev’s 17, blasted 18 aces, and converted 6 of 12 break point opportunities.

“I really couldn’t have done anything better out there tonight, I was in the zone,” said Querrey after the match. “It was my first time playing out here at night, so I wanted to make the most of it.”

With the win, Querrey took over the #1 American ranking for the first time since July 2013. He is also the first U.S. player to reach the quarters of the US Open since Andy Roddick and John Isner in 2011.

“I was a little nervous at first, but I came out playing hot,” said Querrey. “Tennis is a game of momentum and once I broke early, I felt like I was off to the races. I felt comfortable three minutes into the match and that was the key.”

That’s putting it politely. Querrey’s victory last night was the shortest completed men’s singles match of the tournament, so far, and third shortest match in US Open men’s singles history. The speed at which Querrey has dispatched of the competition all tournament is indicative of the Kastle’s dominance in Flushing Meadows. He previously defeated world #71 Dudi Sela in the second round in an hour an 20 minutes! But Zverev is a top-30 player.

Querrey as cool as can be in his first night match on Arthur Ashe Stadium (Photo Credit: USTA/Garrett Ellwood)

The elder brother of world #6 Sascha Zverev is known for his prowess at the net. He is an effective serve and volleyer, who beat John Isner in the previous round and relentlessly attacked the net against Querrey. But the new American #1 was not distressed by Mischa’s game plan. Querrey’s powerful serve, groundstrokes, and sharp all-around movement stifled the few opportunities his opponent manufactured. Zverev won only 23 of 48 net points, less than 50 percent!

“Mischa is someone who can make you feel uncomfortable,” Querrey said. “I went out there with the game plan of getting the return down and then try to pass, hopefully on the first ball, but if it took two passing shots, go with that. The more comfortable I got with the return, the more I started trying to hit the return further and further away from him to make tough volleys. I just got comfortable pretty quickly and started doing that.”

“That was the best I’ve served all summer,” said Querrey. “My serve honestly has been the one thing I feel like I struggled with all summer. My serving percentage has been pretty low. It felt great out there. Something clicked. So I hope it feels like that on Tuesday.”

“He’s another one that is tough to play,” said Querrey about his next opponent. “He doesn’t give you much rhythm. He can go games where he’s serving huge, you don’t get a ball in play. He takes big cuts from start to finish. If he’s on and he is dialed in, he’s one of the toughest guys to play out there. You have to weather the storm against him, know he’s going to have some brilliant shots. But I feel like when my game’s on, I have a dangerous game as well. Hopefully it will be a match where each guy might have a small opportunity here and there, but we’ll see.”

In women’s singles, Venus Williams relied on the wisdom of World TeamTennis co-founder Billie Jean King to get past her fourth round opponent Carla Suarez Navarro.

“I think Billie Jean King put it best,” Venus said after the match in her on-court interview. “Pressure is a privilege.”

After winning the first set easily, the two-time US Open singles champ encountered a motivated and re-energized Navarro in the second, who took advantage of 14 unforced errors from Williams to level the match at a set a piece. But in the end, the seven-time Grand Slam singles champ was able to rely on her experience and courage to reel off six straight games and capture the match, 6-3, 3-6, 6-1, to advance to her fourth quarter-final in the last six majors.

Williams first won the US Open singles title in 2000, defeating Lindsay Davenport in the final. She then defended the title the following year against her sister Serena. Though Venus last made the final in 2002, many tennis experts are picking her as the favorite to reach the championship round at this year’s tournament. She reached the finals of the Australian Open and Wimbledon earlier this year and her win over Navarro boosts her win-loss record at the Slams this year to 19-3, a stat she has every intention of building on in New York.

“I am focused on myself and being as aggressive as possible,” said Williams. “Nobody gives you a Slam, you got to take it and I am trying to take it.”

On Tuesday, she will play Petra Kvitova, who upset #3 seed Garbine Muguruza (who defeated Venus in the Wimbledon singles final earlier this summer). Kvitova has the edge in their career head-to-head 4-1, but the last time they played each other was at Wimbledon in 2014. Kvitova has struggled to gain momentum since her comeback this June from a knife attack that sidelined her last December.

“What she’s gone through is unimaginable, unreasonable,” said Williams. “The world we live in is just shocking. So for her, I think to be playing well is such a blessing. To be able to come out here and do what she needs to do, to clear her head, it’s such a beautiful thing to see.”

Soares, Hingis, the Bryans and Rodionova Progress to Second Week of Competition

In men’s doubles, #4 seeds Bruno Soares and Jamie Murray defeated Marcus Daniell and Marcelo Demoliner, 7-6(4), 6-3, while Robert Lindstedt and Jordan Thompson beat John Millman and Ken Skupski (Breakers), 7-6(4), 6-1, to set up an exciting Kastle vs. Kastle third round showdown today, last up on Louie Armstrong Stadium, not likely before 4 p.m. The winning team will advance to the quarter-finals.

Click here to watch LIVE streaming coverage on WatchESPN and the ESPN app.

Before then, watch five-time US Open champs and #5 seeds BobandMike Bryan play Oliver Marach and Mate Pavic third up on Grandstand, around 1:30 p.m.

WATCH: The Bryan Brothers talk about entering the second week of the US Open

In mixed doubles, Bruno also made some progress. After his men’s win with Jamie, he hit the court again with Timea Babos and beat Raluca Olaru and Nikola Mektic, 7-5, 6-3, to advance to the quarters. They play CoCo Vandeweghe and Horia Tecau on Tuesday for a spot in the semis.

Martina Hingis also had a good weekend in Flushing Meadows. First, in women’s doubles, she and Yung-Jan Chan topped Kristina Mladenovic and Anastasia Pavlyuchenkova in the third round, 6-4, 7-5. Then in mixed doubles, she and Jamie Murray prevailed, 6-0, 4-6, 11-9, against Kveta Peschke and Marcelo Demoliner, in a match that had been suspended overnight, due to rain. Next up, Martina and Chan face Shuai Zhang and Hao-Ching Chan (Yung-Jan’s younger sister) and in mixed doubles, she and Jamie play Juan Sebastian Cabal and Abigail Spears (Lasers).

Should both Hingis and Murray and Soares and Babos win their next mixed doubles matches, they will clash in a highly-anticipated Kastle vs. Kastle semi-final showdown that could decide the title.

Meanwhile, Anastasia Rodionova and Oliver Marach have wrestled control of the bottom half of the draw. They thoroughly bested Jelena Ostapenko and Fabrice Martin (Freedoms), who upset #2 seeds Sania Mirza and Ivan Dodig in the first round, 6-4, 6-2. Next up, they’ll face #8 seeds Lucie Hradecka and Marcin Matkowski in the quarters.

Should Martina Hingis win her next mixed doubles match, she could encounter fellow Kastle Bruno Soares in the semis. (Photo Credit: @WTA)