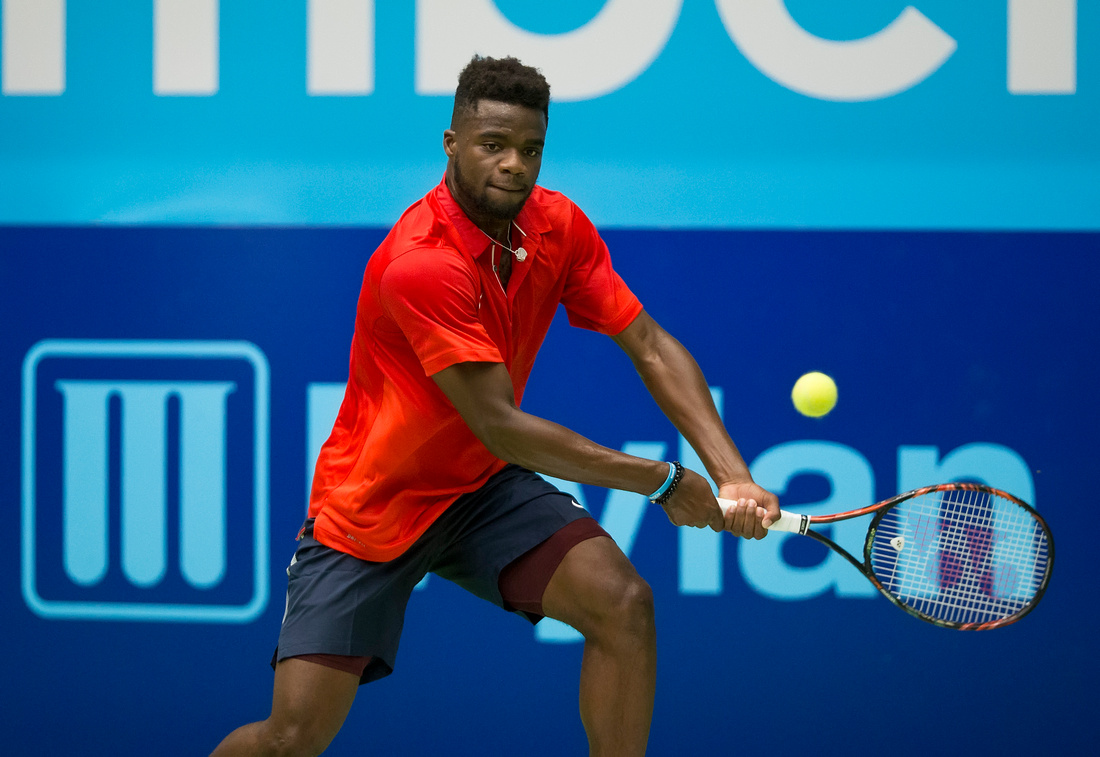 The greatest tennis show in the world is underway in New York and, as always, the Washington Kastles are ready for action.

Tonight, College Park phenom Frances Tiafoe will play 19-time Grand Slam Champion Roger Federer on Arthur Ashe Stadium Court in one of the marquis matches of the opening round of the 2017 US Open. The duo will clash for the second time after the conclusion of the featured women’s match at approximately 9 p.m. Don’t miss local phenom and 2017 Kastles star Tiafoe face the legendary Federer live on ESPN2! Tiafoe faced Federer for the first time this March at the Miami Open and managed to push him to a first set tiebreak, before the G.O.A.T. prevailed, 7-6(2), 6-3.

“It was surreal to have that big match against Roger in Miami,” said Tiafoe. “Now I have to play him here in the first round, which should be fun and I’m really excited. It’s good that I played him already. I know I can compete out there with the greatest of all time. We will both be ready to put on a good show and I’m going to leave it all on the court.”

Tiafoe comes into the US Open on the back of the biggest win of his career, defeating world #6 Alexander Zverev, 4-6, 6-3, 6-4, at the Western and Southern Open in Cincinnati earlier in August. The Kastle snapped Zverev’s 10-match win streak, which included a title-winning run at the Citi Open in Washington, DC and, most notably, a win over Federer in the championship match of the Rogers Cup in Montreal.

Tiafoe is positioned in the lower-top quarter of the draw with fellow Kastle Vasek Pospisil, who plays Fernando Verdasco today, second up on Court 14, around 1 p.m. Should both Kastles advance, the earliest they could meet would be in the third round.

Elsewhere in men’s singles, Sam Querrey notched his first win yesterday over former world #6 Gilles Simon, 6-4, 6-3, 6-4, and has a good opportunity to do some real damage at this year’s tournament. The Kastle is playing the best tennis of his career, as his sensational run to the Wimbledon semi-finals testifies. And though he is slotted in the upper-bottom quarter of the draw with dangerous opponents like #10 seed John Isner (Empire) #13 seed Jack Sock (Lasers) and #4 seed Alexander Zverev, he plays the unseeded Dudi Sela next and the earliest he could possibly meet a top-10 player is in the round of 16.

In women’s singles, #9 seed Venus Williams is also off to a good start in the Big Apple. She won her first round match yesterday against Viktoria Kuzmova, 6-3, 3-6, 6-2. Williams is smack in the middle of the upper-bottom quarter of draw between #5 seed Caroline Wozniacki and #3 seed Garbine Muguruza. Next up, Venus plays Oceane Dodin of France for a spot in the third round.

Another match to watch out for today will feature an exciting Kastles vs. Empire contest between Madison Brengle and Kirsten Flipkens. Flipkens led their WTT head-to-head this season 2-1, so look for Brengle to even the score on the Empire’s home turf. They play fourth on Court 4, around 6 p.m. Tune into ESPN3 and the WatchESPN app to see the action LIVE!

Click here for the most up to date US Open TV schedule to find your favorite Kastles players!

Doubles action is still a day away at Flushing Meadows, but that’s when the full depth of the Kastles’ roster really kicks in.

In men’s doubles, #4 seeds Bruno Soares and Jamie Murray are the team to beat in the top half of the draw. Nearby, in the same section of the draw, is Vasek Pospisil and Nenad Zimonjic. Should Pospisil and Zimonjic win their opener, they could face Robert Lindstedt and Jordan Thompson in the second round. The winner of this hypothetical match would likely meet Soares and Murray in the third round.

In the bottom half of the draw, #5 seeds Bob and Mike Bryan are always the favorites. The brothers are looking to score their sixth US Open men’s doubles title this year. Should they advance, they could collide with fellow Kastle Sam Groth and Aisam-ul-Haq Qureshi, who are seeded #16, but not before the semis, which is a long way off at this point.

In women’s doubles, Anastasia Rodionova will represent the Kastles in the top of the draw, partnering with Nadiia Kichenok. In the same section of the draw, Madison Brengle is teaming up with Varvara Lepchenko. Both teams are vying for their first major championship. At the very bottom of the draw, #2 seeds Martina Hingis and Yung-Jan Chan are definitely favorites to win the tournament. The pair are aiming to capture their seventh title of the year since they joined forces in Doha this February.

In mixed doubles, Martina Hingis is also a favorite to go the distance with Jamie Murray. The duo just won the Wimbledon Mixed Doubles Championship in their first tournament together. They are the #1 seeds in New York and will play new Kastle Robert Lindstedt and Anna-Lena Groenefeld (Lasers) in the first round. The nearest threat to Hingis and Murray is undoubtedly #4 seeds Bruno Soares and Timea Babos, who are positioned in the lower-top section of the draw directly below them. And rounding out the bottom section of the draw is Anastasia Rodionova, who will be partnering with Oliver Marach.