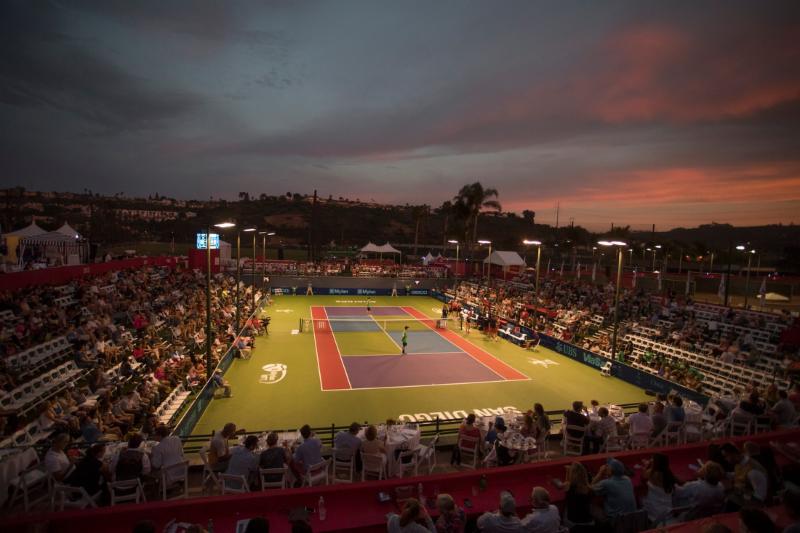 In Successive Losses to the Top Two Teams in the League, Kastles Score Back-to-back Wins in Women’s Singles and Mixed Doubles

The Kastles 10th anniversary season came to a close Wednesday night against the defending Mylan World TeamTennis champs San Diego Aviators. After the Orange County Breakers clinched the first spot in the 2017 Finals on Tuesday, the Aviators entered the match against Washington with three paths to secure the second. If San Diego defeated the Kastles, they would qualify automatically. But the Aviators could also have succeeded with a loss, if the New York Empire won 17 games or fewer in their last match against the Springfield Lasers and in the extremely likely case that the Breakers won 8 games or more against the Philadelphia Freedoms in their last encounter. At the end of the day, there was no game-counting drama. The Aviators prevailed over the Kastles, 22-17, in extended play to setup a rematch of last year’s WTT final tonight in San Diego.

San Diego didn’t take the match lightly. They came ready to play. Rajeev Ram led the way for the Aviators by defeating Sam Groth first in men’s singles, 5-2, then later teaming with Raven Klaasen in doubles repeated the score with a 5-2 win over Groth and Robert Lindstedt. In between, Naomi Broady and Darija Jurak subdued Madison Brengle and Anastasia Rodionova in women’s doubles, 5-3, to jump to a commanding 15-7 lead at halftime. But the second half of the match was an entirely different story and highlights some of the assets the Kastles can cultivate next season.

In back-to-back matches against the top two teams in the league, the Kastles scored wins in women’s singles and mixed doubles. Brengle kept the pressure on San Deigo with a convincing win over Naomi Broady, 5-3, which led to a fifth set rally from Lindstedt and Rodionova, who dominated Klaasen and Jurak, 5-3, to send the match into Extended Play. Unfortunately, with a 17-21 deficit heading into overtime, the mixed duo was unable to capitalize on their gains. Still, it confirmed the Kastles still have what it takes to beat the best teams in the league.

On Tuesday night against the Breakers in Newport Beach, Brengle avenged her loss to Yanina Wickmayer at Kastles Stadium in the home closer last week to finish the season with a winning WTT head-to-head over the Breaker, 2-1. It was also a symbolic win for Brengle, affirming her position as the top full season women’s singles player in the league. Although she finished the season in second place in the Mylan WTT standings with a 0.526 winning percentage, she has played a total of 95 games, far more than any other player in the league. Sorana Cirstea of the Springfield Lasers, who holds first place with a slightly higher winning percentage of 0.564, has played 40 less games. Brengle’s performance against Wickmayer and Broady confirmed her dominance. With more wins over every team in the league, the Dover native is clutch. She consolidated 19 of 49 break points and won 18 of 26 3-all deciding points this season.

In mixed doubles, the Kastles’ success began with the addition of Robert Lindstedt to the lineup in Newport Beach. In his WTT debut, the Swedish doubles star and veteran Kastles linchpin Anastasia Rodionova scored an impressive win over the league leaders Ken Skupski and Andreja Klepac, 5-4. It was the first time Lindstedt and Rodionova had ever played together. Backing that win up the very next night against the defending league champions is at the very least a testament to good chemistry. Though the Kastles ultimately lost to the Breakers, 23-14, they were able to walk away with some heartening mixed results that extended to San Diego, hopefully something Kastles fans can look forward to next season.

Next up, the Breakers play the Aviators in the 2017 Mylan WTT Finals presented by Geico at the Omni La Costa Resort & Spa in Carlsbad, California tonight at 8 p.m. PT (11 p.m. EST). Television coverage of the final begins on ESPN3 and the WatchESPN app at 11 p.m. EST, with ESPN2 joining live coverage at 12 a.m. For more information visit