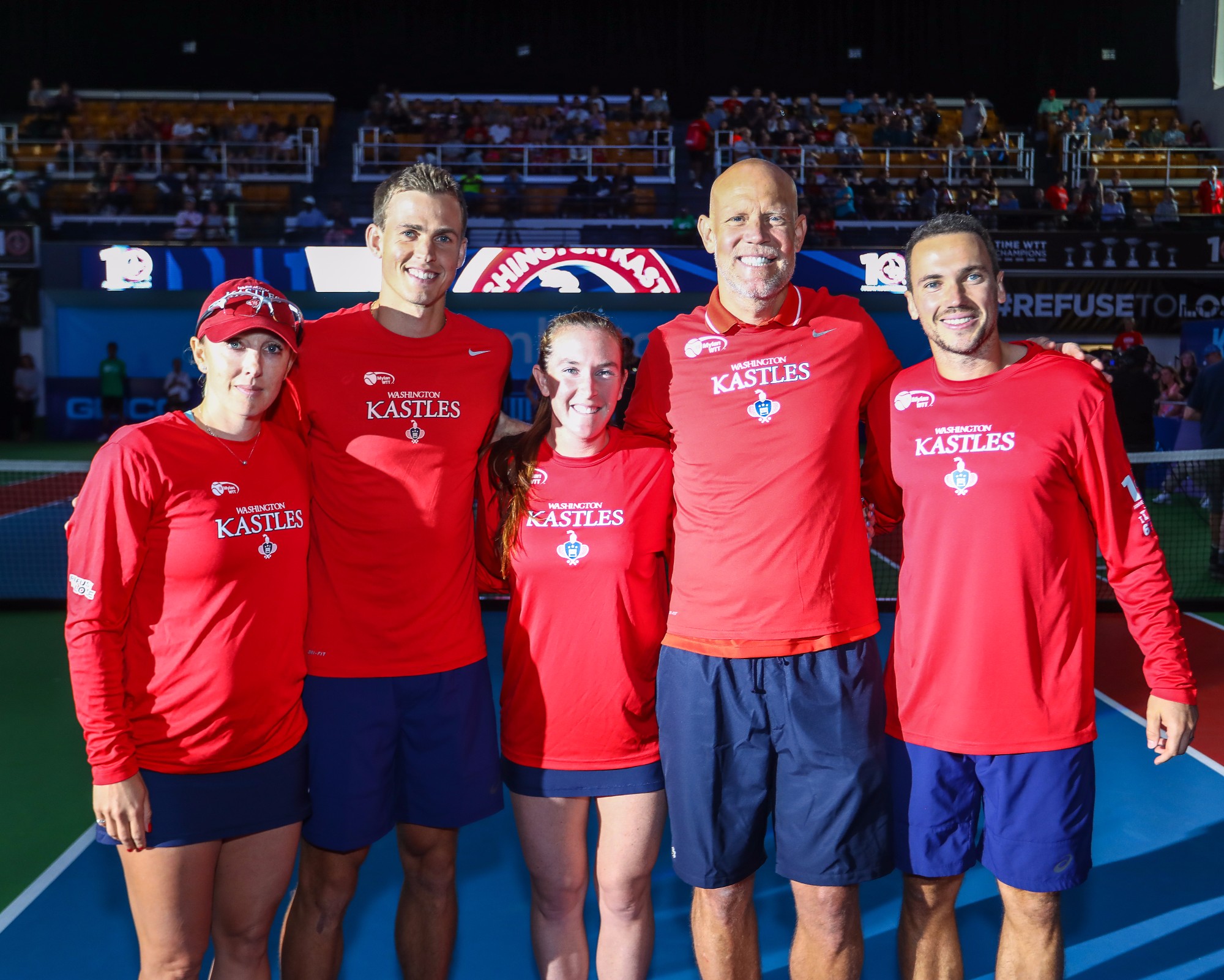 A big crowd was on hand Saturday night at Kastles Stadium to cheer on the Washington Kastles in their final home match of the season. For the occasion, the six-time World TeamTennis champions played the Orange County Breakers, who came with one mission in mind: to beat the best franchise in WTT history. Sadly for Kastles fans, they succeeded. With every member of their team swinging freely and playing at the top of their games, the Breakers closed down Kastles Stadium for the season, 24-14.

From the very first set, it was clear that the Breakers had undergone a change since the Kastles beat them soundly at the beginning of the season. Ken Skupski and Andreja Klepac, the Breakers’ star mixed doubles team, appeared twice as strong this time around playing Bruno Soares and Anastasia Rodionova. They broke Rodionova’s serve in the third game of the set and held to take the early advantage, 3-1.

The Kastles didn’t play badly. Soares hit plenty of big serves and a number of skillful half-volleys, and Rodionova smacked her fair share of cold-blooded winners from the baseline. But the combination of Skupski’s brutal lefty serve and Klepac’s low returns paved the way for the Breakers to crash the net and close the set out, 5-2.

The Kastles got a bump in women’s doubles. Facing WTT league leaders Klepac and Yanina Wickmayer, Rodionova and Madison Brengle played some of their best tennis this season. The competition was tight throughout the set. Both teams stayed on serve and there were few break opportunities. The highlight of the set was how well both teams moved and switched and changed the direction of the ball in the crucial moments to block their opponent’s advances. It’s no wonder that at the end of two service rotations, the set was decided by a tiebreak. And this was where the Kastles played their best.

Rodionova grabbed the upper hand right away on the first point with one of her signature forehand drives. On the very next time point, Brengle put her return of Wickmayer’s serve out of Klepac’s reach at net and an intense back-and-forth rally developed, displaying the deft touch, lobs, angles, and precision down-the-line shots both teams possessed. Winning those first two points was rocket fuel for Rodionova. She served a bomb to go up 3-0, before missing a backhand to give up her first point. When Klepac served after the changeover, the Kastles were dialed in for the break. Rodionova pulverized Klepac’s second serve to bring up the first set point and Brengle clinched the set with a crosscourt return winner, 5-4(1).

The Kastles trailed by only two games going into the men’s doubles set, 9-7. In this last set of the first half, Soares got another chance to partner up with Vasek Pospisil, after the pair teamed up for the first time the night before in the Kastles’ away loss to the Springfield Lasers. Both Kastles are extremely talented and accomplished tennis players having both been ranked in the top five in doubles and winning Wimbledon, US Open and Australian Open doubles titles between them, but it was clear their opponents, Skupski and Teymuraz Gabashvili, were in harmony from playing together all season. The Breakers pair’s rhythm, communication, and power were breathtaking.

Pospisil served first for the Kastles and was broken instantly. Thereafter, the Breakers pounded serves and returns so hard and so low that it was hard for the Kastles duo to stay in the points. At the end of the first service rotation, the Breakers already led 4-0 after two breaks of serve – a rarity in WTT men’s doubles. After the changeover, Pospisil served with more intensity, which enabled Soares to assert himself at net and help him hold. But Gabashvili brought even more power serving for the set at 4-1. The Kastles began to find their targets in this game and earned three critical break points that would have let the Kastles, at minimum, have a chance for another service hold and to keep the match within striking distance. The Breakers saved the first two and, after an extended rally full of masterful and powerful shot making on both sides of the net, Gabashvili hit an elegant topspin lob winner that surprised the Kastles to take the set, 5-1, and extend the Breakers’ lead at halftime to 14-8.

As always, Madison Brengle put up an admirable fight in women’s singles, but the Breakers’ Yanina Wickmayer was in rare form last night and eager to avenge the loss she suffered to Brengle earlier this season. With crushing power and pinpoint accuracy, Wickmayer dominated the first half of the set, breaking Brengle to go up, 3-1. But after the changeover, Brengle readjusted to the pace and put herself in a better position to defend against the Breaker’s ceaseless fire. Running hard, defending angles, and using her slice forehand to buy time and her drive forehand to steal it away, Brengle pulled off a sensational break to shrink the gap in the set to 2-3. It was exactly the kind of turnaround Kastles fans have witnessed all season from Maddy.

Unfortunately, the comeback was not meant to be last night. While Brengle saved two break chances in her next service game, she couldn’t save the necessary third. In the next game, Wickmayer served out the set, 5-2. The Kastles now trailed the Breakers, 19-10, going into the home stretch.

This left new Kastle Vasek Pospisil with the extremely challenging task of winning the last set of the match against Gabashvili in men’s singles, and then winning at least four games in a row to tie the score in overtime and get a shot at a deciding Supertiebreaker. This was a nearly impossible feat, especially the way Gabashvili played Saturday night.

With overwhelming force, Gabashvili broke Pospisil in the first game and held quickly thereafter with punishing serves and groundstrokes that blew the Kastle rookie off the court. In those first two games, it looked like Gabashvili might never miss. Then, slowly but surely, Pospisil began to work his way into the set. Once he found his rhythm, Pospisil began to move the Russian giant around the court enough to take the ball out of his strike zone and picked up some unforced errors. The tactic worked. Down 1-2, Pospisil broke the Teymurnator to get back on serve.

From there, play evened out for the next few games until the tiebreaker. After Pospisil gave up a couple of early unforced errors on his serve (including a double-fault), Gabashvili hit a resounding ace to extend his lead to 3-0. And after a power baseline rally ended with a Pospisil forehand sent long, the match was all but over. Pospisil saved one match point with an ace, but couldn’t save the next one. Gabashvili took the final set, 5-4(1) and the Breakers took the match, 24-14.