Bipartisanship is Not Dead in DC: Republicans & Democrats Play Together For a Great Cause at 5th-annual Washington Kastles Charity Classic 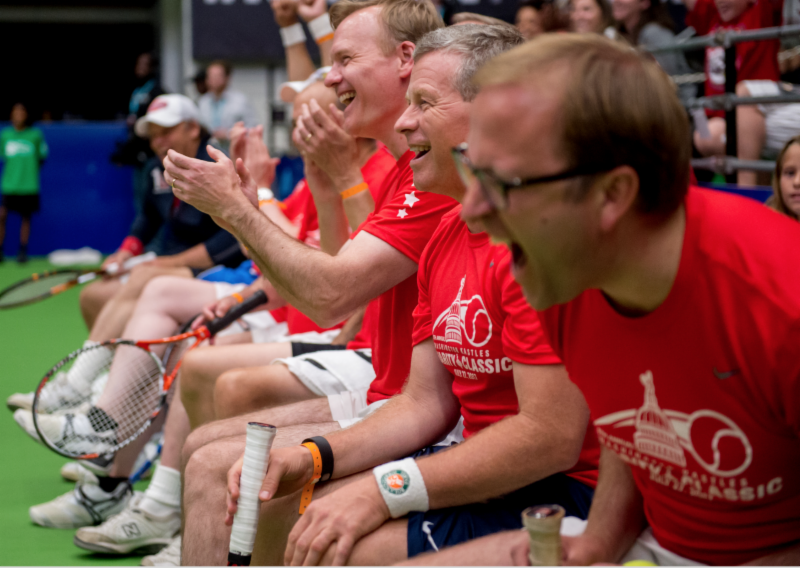 It was a battle unlike any other.

On center court of Kastles Stadium Thursday night, members of congress and the news media clashed in the 5th Annual Washington Kastles Charity Classic to prove bipartisanship is not dead in this country. The highly-entertaining competition featured a series of fast-paced WTT matches, mixing Republican and Democratic members of congress with well-known Washington media personalities and Kastles stars who passionately served it up with one thing in mind: charity.

As always, this year’s roster of participants was comprised of a colorful cross-section of players from both sides of the aisle. Regardless of party affiliation, the competitors were divided into two bipartisan, co-ed teams: the Stars and Stripes. When all the points were tallied at the end of the night, the Stars beat the Stripes, 43-42. But in the end, everyone won.

The match officially got underway when Congressman Jared Huffman (D-CA) and political analyst Mark Plotkin took the court for the Stars against Congressman Kevin Yoder (R-KS) and Albert Tillman from Bloomberg News for the Stripes. It was a thrilling opening to the competition, as the match rotated around the powerful serve and net play of Congressman Huffman. Though the Stripes did their best to negotiate the Congressman’s half of the court, they fell short in the last moment and the Stars took the first tiebreak, 7-6.

Next came Congressman Charlie Dent (R – PA) and John Dickerson, host of CBS’s Face the Nation, for the Stars, who played Congressman Dave Brat (R-VA) and Bob Cusack, Editor of The Hill, from the Stripes. In this match Congressman Brat and Cusack were a juggernaut. They defeated the Stars, 7-2, in a surprise blowout that propelled the Stripes to a 13-9 lead in the match.

But the Stars struck back with unified force in the featured bipartisan showdown of the night. Democratic Rep. Bobby Scott and Republican Rep. Bob Goodlatte, both from Virginia, traded blows with Stripes Rep. Cheri Bustos (D-IL) and Rep. Erik Paulsen (R-MN). But in the end it was the Stars who won out, 7-4, to shrink the deficit for their caucus to 16-17, before the big brass stepped in.

In this classic “Battle of the Coaches,” Stars Head Coach Bruno Soares paired with Star Kastles owner Mark Ein to take on DC United Head Coach Ben Olsen and Kastles Head Coach Murphy Jensen for the Stripes. This match contained many crafty strategic maneuvers, as both Stars and Stripes jockeyed for the lead with equal determination. Ultimately, the Stripes carried the day, 7-3, behind some sharply angled shots from the DC soccer legend which knocked the Stars out of alignment now, 19-24

At this juncture the real pros stepped in. Star Kastles Madison Brengle and Bruno Soares squared off in a heated and highly entertaining battle against Stripes Kastles Anasatasia Rodionova and Coach Murphy. This rally-laden contest of dinks and lobs mixed with booming serves and forehand winners had the crowd in stitches, as Brazilian doubles star Bruno Soares ran all over the court, hitting three tweeners in a single point, following by all four players dazzing the crowd with a 20 volley exchange in another. At the end of it the Stars were the victors, but only by a point, 7-6.

In the penultimate set of the match, Star Congressman Charlie Dent (R-PA) was surrounded on all sides by the media. He and his partner ABC News anchor Jonathan Karl played Stripes Bob Cusack, editor and chief of The Hill and NBC News correspondent Peter Alexander. The Stripes got off to a 5-2 lead but the Stars came storming back behind Dent’s strong serves and a great volley winner by Karl as they reeled off 5 straight points to take the set 7-5. At the end of this collegial competition, the Stars trailed the Stripes by just a point at 37-36.

WATCH: Congressman Dave Brat (R-VA) on the camaraderie between Republicans and Democrats in Washington

The match ultimately hinged on the “Coaches Choice” tiebreaker. This wild and zany climax to the competition resembled a fast-paced chess match, where the head coaches of both the Stars and Stripes substituted in and out a wide assortment of players from their rosters to meet the various challenges on opposite ends of the court. The highlight of this very entertaining finale to the evening was the striking comeback from the Stars. Down 5 points, the Stars came back to clinch the win. Rep. Dent closed out the match with a service winner and he was awarded the Kastles Charity Classic’s MVP award for the second straight year.

This fantastic evening of tennis benefited four charities: TAPS, Food & Friends, N Street Village and DC Public Education Fund. 100% of the proceeds from the event were awarded to each of the wonderful organizations during the match.