Kastles Run Into Hot Freedoms, Last Home Match of the Week Goes to Philadelphia, 23-17, Frances Tiafoe Lights Up DC in His Last Match of the Season 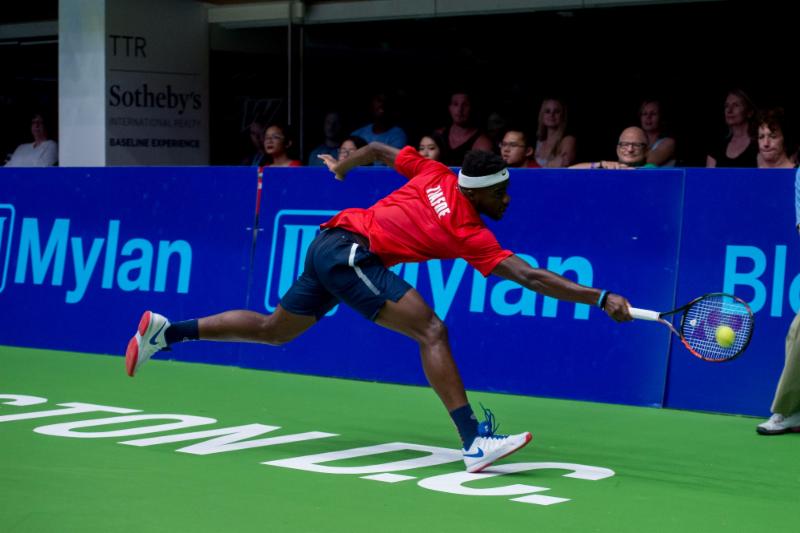 Washington brought their ‘A’ game to Kastles Stadium last night, in hopes of sweeping their first homestay of the season. The night before, they beat the defending Mylan WTT Champion San Diego Aviators, and in the two nights prior to that they defeated the Orange County Breakers and New York Empire to ascend to #1 in the league standings. They needed to win one more match against Billie Jean King’s Philadelphia Freedoms to consolidate their lead in the race to qualify for the WTT Finals. But the Freedoms came out smoking and snapped the Kastles’ win streak, 23-17.

“Tonight, Philly was just better,” said Kastles owner Mark Ein after the match. “They have a very talented team and every person on their team played great tennis tonight.”

The Philadelphia squad included American tennis stars Sloane Stephens and Donald Young, along with doubles specialists Fabrice Martin and Taylor Townsend. Against this lineup, Washington’s coach Murphy Jensen chose to play all of the doubles sets in the first half of the match and finish with singles, an order the three-time Mylan WTT Coach of the Year has used to success on numerous occasions this season

The match began with mixed doubles, pitting the Kastles’ Treat Huey and Anastasia Rodionova against Martin and Townsend. The Kastles started strong with Huey holding at love to start the set and then earning a breakpoint in Fabrice Martin’s opening service game. But Townsend proved her worth early on, hitting an array of effective volleys that caught Huey and Rodionova by surprise and raising her partner’s game in the process. The Kastles fought hard, as Huey poached and took overheads wherever he could, and Rodionova hit some unreturnable serves and cracked a few down-the-line winners past Martin and Townsend, but it seemed every opportunity they created was blocked by their opponents who played a very high level. An extremely high first serve percentage from the big-serving Freedoms in this set (77%) erased the Kastles’ only two chances to break. Townsend, whose lefty serve and deft net play were particularly strong last night, served out the set, 5-3.

The momentum generated by the Freedoms in this opening set carried over to women’s doubles, where Townsend and Sloane Stephens quickly shot off to a 4-1 lead against Rodionova and Madison Brengle. But then in Rodionova’s second service game, the Kastles’ patented “Refuse To Lose” spirit kicked in and they slowly began to turn the set around. A-Rod summoned all of her strength to blast the hardest shots she could, while Brengle utilized her lob to maximum effect. Down 2-4 in the set, the Kastles managed to break Stephens’s serve after Brengle dug in and fired a series of crosscourt missiles that overpowered both Freedoms and shrunk their set lead. The Kastles eventually forced a tiebreaker, but the Freedoms were clutch at the right moments and took the second set as well, 5-4(2).

The match score was 10-7 Philly when the D.C. Dream Team of Frances Tiafoe and Huey hit the court opposite Martin and Young in men’s doubles. The Kastles took aim at their East Coast rivals, firing every round of ammunition they had, but the Freedoms were invincible in this set. Tiafoe and Huey hit 75% of their first serves in and were still unable to win. The Freedoms broke twice during the set, which happens infrequently in WTT men’s doubles matches, and served so well the Kastles didn’t get one break opportunity. The final break sealed the set for the Freedoms, 5-1.

But Kastles Stadium didn’t lose heart. Though Washington trailed 15-8 at halftime, legendary D.C. performance artist DJ Kool took over center court and pumped up the crowd and the bench for an exciting finale to the first week of the Kastles’ 10th anniversary season.

Brengle and Stephens led off the second half of the evening in women’s singles. Stephens showed no sign of the foot injury that caused her to have surgery this past winter. The former World #11 moved around the court as quickly and nimbly as ever, and hit the ball better than she has in years. But Brengle was up for the task. She had already beaten a former World #12 and #13 this week and went toe-to-toe with Stephens last night. In fact, the native of Dover, Delaware may have played better than she had at any other time this week, chipping and lobbing one moment, then driving groundstrokes and ripping angles the next. At 2-2 on Stephens’s serve, Brengle did it all in one point!

After an extended baseline rally, Brengle brought Stephens into the net, then lobbed her back to the baseline, then passed her in the opposite direction with a sharp crosscourt angle backhand. All of Kastles Stadium erupted and Brengle broke Stephens in that game, still, the quality of that and other sensational points in this set had as much to do with Stephens’s ability to chase down and return the battery of shots that would have been winners against almost any other player in the world. The set ended up going the Freedoms way as Stephens ultimately won the hard fought set in a tiebreaker, 5-4(3).

The last set of the night was a most memorable one for Washington Kastles newcomer Frances Tiafoe’s final match of the season in  a very exciting match-up against another talented American tennis star,Donald Young. Similarly to Tiafoe, Young has been in the spotlight since he won the Junior Orange Bowl in 2003, becoming the first American to win the championship since Jim Courier in 1986. Since then, Young has reached a career-high singles ranking of #38 in the world and scored wins over some of the biggest names in tennis. Young and Tiafoe have played a couple of times over the years, but not recently until last night. Young won their latest meeting, on grass at Queen’s Club in 2016, but Tiafoe had beaten Young on clay less than two months prior to that, so the match at Kastles Stadium would be the most current tiebreaker.

Though Washington trailed 20-12 by the time they struck the first serve, and the likelihood of a Kastles win appeared remote, the packed crowd cheered on their native son with the enthusiasm of a championship tiebreaker. Lifted by the din of their boisterous screams, Tiafoe served with the fury of man destined to be a world #1. After holding for 3-2, the newest Kastle broke Young to take the lead in the set. In this game, Tiafoe stole the first point off Young’s serve by passing him at net. He claimed the next point off a short, low backhand return, which Young hit into the net. And when Tiafoe hit an extraordinary backhand return winner to gain 2 breakpoints, the crowd rose to its feet loudly supporting the young Kastles star’s attempt to complete the service break. After one more hard-hitting rally, Young yanked his forehand wide and gave Tiafoe the chance to serve out the set at 4-2.

As the veteran Freedoms coach Craig Kardon, who has been at the sport’s highest level for decades, said after the match, “Kastles Stadium is definitely one of the greatest home court advantages in the sport of tennis.”

That Kastles faithful kept up their enthusiastic support as some slight drama ensued in the following game when, Tiafoe found himself down, 1-3, triple breakpoint.  At this point, Coach Murphy Jensen called a timeout and talked to his star men’s singles player. When play resumed, Tiafoe reeled off three unreturnable serves in a row with increasing power, the last one an ace, to win the set 5-2, and push the match into Extended Play.

With the Kastles behind 17-22, it would require an incredible comeback to take the match. The prospect of Tiafoe breaking Young three times and winning six games in a row was extremely slim, but not one person left the stadium. They watched and cheered on their star until the final shot bounced twice, when Young took the first game of Extended Play to close out the match for Philadelphia.

“When I think about this week,” said Mark Ein, “it really was the Frances week, a local kid who first came to see the Kastles when he was eleven years old and always aspired to be good enough to play on his hometown team. He came here this week and was a superstar. He lit up the crowd with his smile and his play, and I think it’s a week that people in Washington D.C. will remember for a long time.”

“It’s a week I will cherish forever,” said Frances.

Next up, the Kastles have a rematch against the Freedoms in Philadelphia.