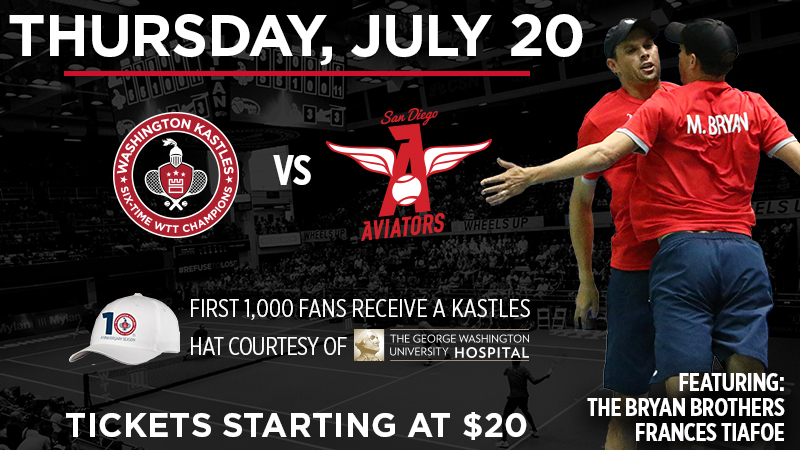 The greatest men’s doubles team in history Bob and Mike Bryan headline this grudge match against the reigning WTT champions, the San Diego Aviators. The world-famous twins have won 113 career doubles titles together, including 16 Grand Slam crowns, but will have to use every ounce of their talent to defeat Raven Klaasen and Ryan Harrison in the marquee set of the night. Klassen has won 12 career ATP doubles titles, including most recently Delray Beach and Indian Wells. He also knows how to beat the Bryan Brothers. He and his partner (and Aviators teammate) Rajeev Ram ousted the Brothers in the quarters of the 2016 Wimbledon Championships.

In this match, Klassen will team up with 2017 French Open doubles champ, Ryan Harrison, who is also a very skilled singles player. The Louisiana native and current world singles #41 won the Memphis Open this year without losing a set. He’ll play Frances Tiafoe in singles. The two have played three times and Tiafoe leads their head-to-head, narrowly, 2-1, but it’s been over a year since they last met and their matches have historically gone the distance. Expect these two rising American stars to battle hard at Kastles Stadium.

In women’s singles, Kastles starter Madison Brengle will be tested by Shelby Rogers. The Charleston-native has been ranked as high as #48 in the world and slayed some of the biggest giants in the game, including Karolina Pliskova and Petra Kvitova, during her incredible run to the quarters of the 2016 French Open. And in women’s doubles, Kastles linchpin Anastasia Rodionova will face her longtime doubles partner Darija Jurak, with whom she won the Acapulco title earlier this year, to round out an extraordinary evening of high-stakes tennis.