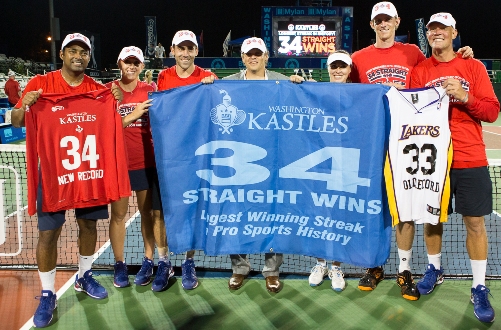 To commemorate the Kastles 10th-anniversary season, we’ve reviewed the team’s most memorable events, episodes, incidents, and milestones over the years, and selected the 10 Greatest Moments in Kastles History. We hope this vibrant look back inspires you to look forward to another historic season!

On Tuesday, July 9, 2013, at The Wharf, the Washington Kastles played the Boston Lobsters in their first encounter of the season. Ordinarily, there wouldn’t be much fanfare surrounding such an early, regular-season match, but this match was far from regular. A major streak was on the line. If the Kastles prevailed, they would set a new record for the longest win streak in U.S. pro sports history, surpassing the 1971-72 Los Angeles Lakers team that won 33 straight NBA games.

It was a fitting matchup for the monumental moment. The Kastles had gone undefeated since falling to the Lobsters on July 22, 2010. Though the Kastles beat the Lobsters handily the last time they met, 20-11, it had been a year since they played, and their overall head-to-head was pretty tight. Going into the match, Washington led Boston, 6-4.

Everyone’s nerves were on edge.

With another sold-out crowd eagerly anticipating a magical evening, six-foot-eight Kevin Anderson started the match reeling off 16 of 18 points with his powerful serve to beat Amir Weintraub in men’s singles and take the lead for Washington, 5-2. In women’s doubles, Martina Hingis and Anastasia Rodionova continued the momentum, defeating Jill Craybas and Katalin Marosi almost as effortlessly, 5-3.

It was a good night for Hingis. After extending Washington’s lead to 10-5, she remained on court for mixed doubles, teaming up with 13-time Grand Slam doubles champion Leander Paes to defeat Eric Butorac and Marosi, 5-3. And when Hingis was tapped again to play singles against Craybas, the former world #1 had the opportunity to set a mini-streak of her own, winning three sets in a row: doubles, mixed, and singles!

After Hingis jumped ahead in games 3-0 with little resistance, some thought she might score a bagel. But Craybas managed to hold in her final two service games, although she never mustered a break point on Hingis’s serve. The Kastle was simply too masterful. She never hit two straight shots the same height over the net, mixing flat drives, top spin, drop shots and slices with facile precision. Hingis ultimately finished off Craybas, holding at love, 5-2, to put the Kastles ahead 20-10 going into the final set of the match.

At this point, there was very little Boston could do. Paes and Bobby Reynolds were in prime position to close out the match against Butorac and Weintraub to give the Kastles their 34th-straight win.

After Reynolds held for 1-0, he hit three remarkable return winners in a row to break Butorac. With the Kastles leading 2-0, Paes fell behind 0-3 on his serve, but Reynolds again hit three more winners to rally his partner and give Washington a 3-0 advantage in the set. At this point the Lobsters regrouped and won a couple games to keep the set close, but the early damage inflicted by the Kastles proved too extensive to overcome.

As Paes served out the final game of the match, up 4-2, the capacity crowd alternated between riveted moments of silence and passionate boisterous cheer. When Reynolds leaped into the air and thumped an overhead smash into the stands that gave Washington match point, the outburst was deafening. When Paes hit a service winner to clinch the match and book the record, the reaction was ten-fold, as every man, woman and child in Kastles Stadium rose as one.

In the celebration that followed, Lakers Executive Vice President Jeanie Buss – who coincidentally was involved with WTT in the 1970s as an executive for the Los Angeles Strings – issued a congratulations statement after the Kastles’ win.

“Winning 33 consecutive games was an amazing accomplishment by our 1971-72 Lakers team,” said Buss, “as evidenced by the fact that no other team has come close to reaching it for over 40 years now. On behalf of the Buss family and the Lakers family, I want to congratulate the Washington Kastles, their players, and our good friends Billie Jean King and Ilana Kloss [of Mylan WTT] on this milestone accomplishment of theirs.”