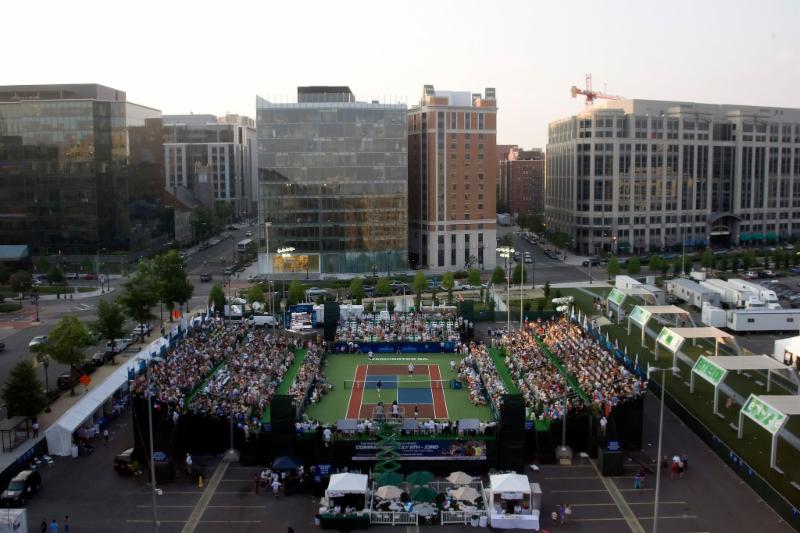 To commemorate the Kastles 10th-anniversary season, we’ve reviewed the team’s most memorable events, episodes, incidents, and milestones over the years, and selected the 10 Greatest Moments in Kastles History. We hope this vibrant look back inspires you to look forward to another spectacular season!

On Tuesday, July 8, 2008, Washingtonians got their first look at their new pro sports team. At precisely 7:31 p.m., the Washington Kastles struck the opening ball in their first-ever home match against the Boston Lobsters, and, on that night, World TeamTennis became the hottest ticket of the summer in the nation’s capital.

It was a Grand Opening!

Over 2,500 fans and eighty-seven credentialed media members crammed into a sold out Kastles’ Stadium at City Center DC. Songs of the summer played through the pre-match party. Cheerleaders pumped pompoms. Heads turned left and right. Fingers snapped photos on cellphone cameras. And demands to see the Kastles’ first marquee player emerge on court rang loud throughout the stadium. When at last Serena Williams made her entrance, the crowd rose to its feet and applauded the sports icon with extended cheer.

“I could not have possibly imagined something better than this,” team owner Mark Ein said. “A packed stadium, Serena Williams, an undefeated record,” part in truth, part in jest.

(The Kastles won their first two matches of the inaugural season on the road against the Philadelphia Freedoms and Delaware Smash.)

By nightfall, fans clogged the streets near the stadium in the shadow of nearby office buildings and hotels. They came from suburbs ranging from Bethesda to Leesburg with their families, friends or business associates. Former Washington Wizards star Caron Butler sat at a table behind the baseline, directly across the court from former D.C. Mayor Adrian M. Fenty.

Though the Kastles’ inaugural home match began with men’s doubles, the stadium didn’t fully come to life until the second set, when Williams took the court. Fans screeched when she started warming up just before her mixed doubles match with teammate, Justin Gimelstob.

“I feel excited to play,” Williams said before the match. “I’m ready and looking forward to having a lot of fun out there tonight.” “We’ve worked really long and really hard to make this happen,” Ein said.

Ein, founder and CEO of Kastles Systems and Venturehouse Group, is used to getting things done. He connected with league co-founder Billie Jean King at the US Open the previous year and by the following summer, after creating the organization’s infrastructure, selecting a location to build a stadium, hiring a coach, drafting players, filling the stadium with fans, Ein sat in the front row of Kastles Stadium, between Mayor Fenty and King, the proud father of a sports dynasty.

Perhaps it was the nerves of the occasion or the intensity of the moment that caused the Kastles to get off to a very slow start losing the first two sets 5-1 and 5-2 before Justin Gimmelstob worked his way back into his singles set against Jan-Michael Gambill falling just short at 5-4. Serena Williams partnered with Mashona Washington to win the Kastles first ever set 5-4 over the Lobsters pair of Raquel Kops-Jones (who would later play for the Kastles) and Marie-Eve Pelletier to pull closer at 19-12 and give Serena a fighting chance to pull off an amazing comeback in the last set. The Kastles star won the set 5-2 over Pelletier to send the match to overtime. After Serena won the first two games of overtime to pull within two games at 21-19, the fans were going crazy sensing that an already historic night might also be a match that no one would forget. However, in the third game of overtime, Pelletier scraped together four very tough points to close out overtime and the match 19-22.

It mattered not that Washington lost the match. It was a historic night for DC sports fans welcoming a new team to town and little did Boston (or the rest of the world) know at the time what was to come…

Be part of the Kastles future!

Get your tickets for the 10th Anniversary Season today