Nick Kyrgios Returns to the Kastles on Friday, July 21st 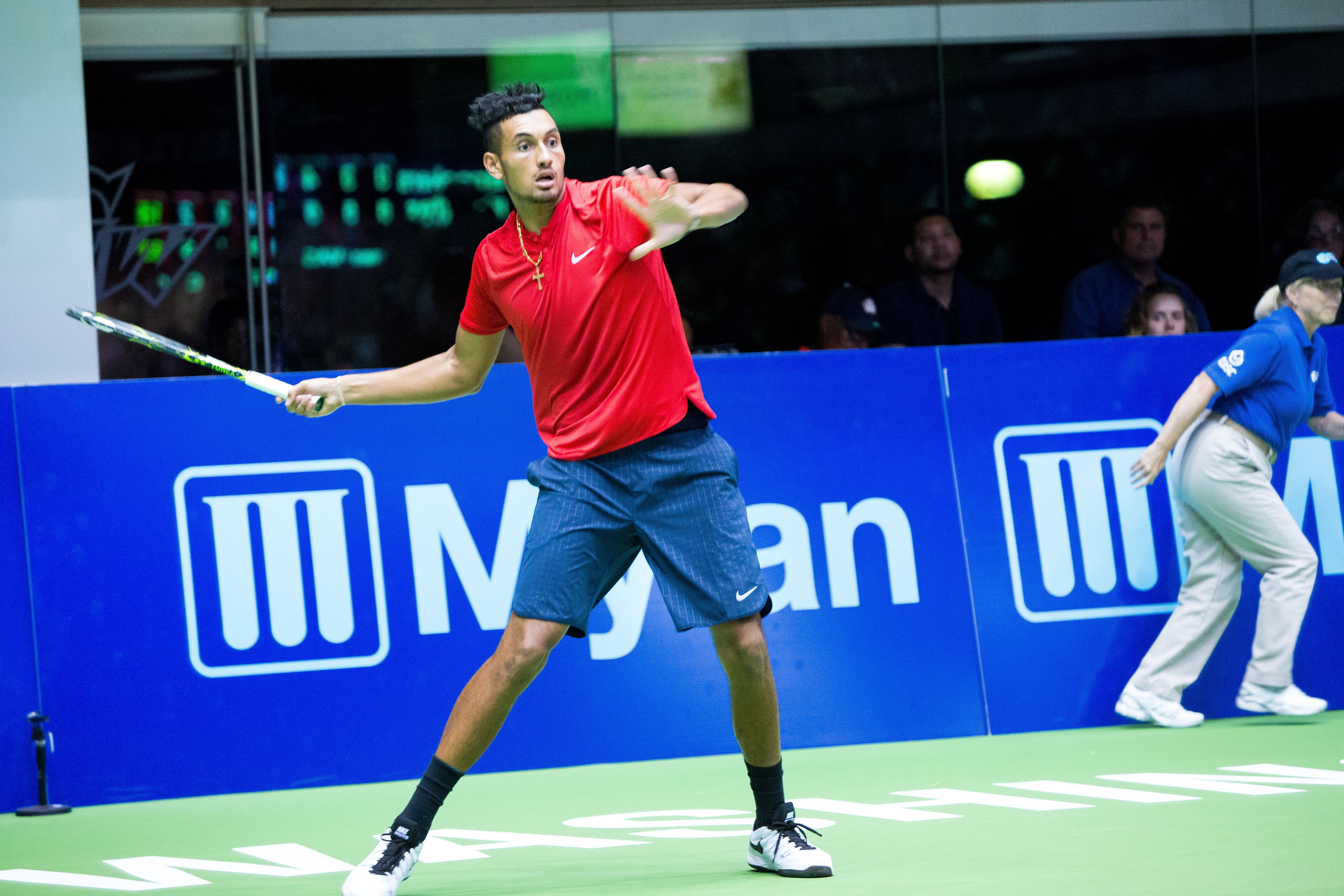 The Kastles are thrilled to announce the return of global superstar, Nick Kyrgios, on Friday, July 21st. The world top-20 phenom Kyrgios is a fan favorite who showed Kastles fans last summer his incredible shot making skills in an electric appearance. With his return to Kastles Stadium this year, that match promises to be one of the most exciting nights of the summer.

“It’s going to be exciting,” said Kyrgios. “I had great memories last year. I felt right at home from the get-go. I’m definitely looking forward to it.”

Kyrgios is one of the great talents and entertainers in the sport of tennis. When commentators and writers talk about the next wave of great players, his name almost inevitably comes up. The athletic and charismatic 6’4″ Aussie dazzles crowds around the globe with his shot making ability and earth shattering forehand and serves. In one of the most sensational nights of the summer schedule, four marquee players – Kyrgios and Frances Tiafoe for the Kastles and Donald Young and Sloane Stephens for the Freedoms – will go at it in front of a packed Kastles Stadium crowd on Friday night, July 21. Tickets for that match and all seven home matches are on sale now at . Get yours now – that night is certain to sell-out!

In 2014, as an unheralded 19-year old, Kyrgios burst on the scene when he upset world #1 Rafael Nadal in the fourth round of Wimbledon, 7-6, 5-7, 7-6, 6-3. The between-the-legs drop shot he executed during that match remains one of the most watched tennis clips on YouTube today.

Since that breakthrough performance, Kyrgios has established himself as one of the most deadly competitors in the game. The 19th-ranked Kyrgios has reached the quarterfinals of Wimbledon and the Australian Open and already holds career victories against virtually every player currently ranked in the top ten, including Roger Federer, Novak Djokovic, Stan Wawrinka, Milos Raonic, Tomas Berdych and Richard Gasquet.

This year, Kyrgios has added to his impressive resume with not one, but two victories over world #2 Djokovic – first at the Mexican Open and then just a week later at Indian Wells. He also beat the current world #10 and main NextGen rival Alexander Zverev at Indian Wells and Miami, to take a head-to-head lead, 2-0, in their career rivalry.

“Nick is widely recognized as one of the most gifted players in the world,” said Kastles owner Mark Ein. “Anyone who has seen him play on TV knows that he’s a special talent, but what they might not recognize until they see him play in person is how much he loves the team format and entertaining crowds. He’s a perfect fit for the Kastles. He feeds off crowd energy and, here in Washington, that’s what we do best. We can’t wait to have him back.”

Nick also made a sensational run to the semis at the Miami Open this March, where he lost in three, tiebreak sets to Roger Federer, in what has been widely heralded as the match of the year on the ATP Tour! Final score: 7-6(9), 6-7(9), 7-6(5). The next day, Kyrgios flew to Australia, where the following weekend he knocked off fellow Kastle Sam Querrey and John Isner (New York Empire) to advance his home country to the semis of the 2017 Davis Cup over a tough US squad.

Last season he won three ATP titles: Marseille, Atlanta, and Tokyo, and reached a career-high singles ranking of #13 in the world.

In the process of making gains up the singles ladder, Nick has also proven to be one of the toughest doubles players in the game, evidenced by his performance earlier today at the French Open. Partnering with fellow Australian Jordan Thompson, Nick beat the #2 seeds Pierre-Hugues Herbert and Nicolas Mahut, 7-6(10), 4-6, 6-3. And twice this year, Kyrgios has defeated his Kastles teammates Bob and Mike Bryan. In Indian Wells, Kyrgios and Nenad Zimonic beat the Bryans 6-4, 3-6, 10-7 in a thrilling match that Kyrgios took over and virtually won single-handedly. And then two weeks ago, he and Jack Sock (Springfield Lasers) prevailed against the Bryans again in an electrifying quarterfinal showdown at the Madrid Open, 6-7(5), 7-6(5), 10-7. It was in this match that Kyrgios hit perhaps the shot of the tournament, an overhead off an overhead, that you can watch here.

We expect Nick’s appearance at Kastles Stadium on Friday, July 21, to be no less sensational!

That match against Philadelphia Freedoms is a star-studded affair with marquee players on both rosters. Kyrgios will team up for the Kastles with fellow ATP NextGen star Frances Tiafoe to take on the Freedoms, who will feature notable and exciting Americans Donald Young and Sloane Stephens. Stephens is the holder of four career WTA titles and appearances in the fourth round of all four Grand Slam events and reached a career high ranking of #11 in 2013. She defeated Serena Williams in a memorable match for the ages in the 2013 Australian Open quarterfinals.

Joining Stephens will be American favorite Donald Young, who will face Kyrgios in what promises to be a sensational men’s singles match that night. Young is currently ranked #51 in the world and is remembered for his incredible run in the 2015 US Open that saw him notch come-from-behind victories against three straight opponents, culminating in an epic five-set victory over Viktor Troicki.

Don’t miss out on the action!